With the New York charity circuit still on hiatus, here is how some philanthropists and society figures are spending their time and resources.

Where have you been sheltering?

Normally I live in SoHo. But during the pandemic I moved to Los Angeles, to our family home in Brentwood, with my daughters and sister. I’m looking out at the garden and its white roses. Everything in the garden is white.

Has your daily routine changed significantly?

It’s been a real gift to realize how much I can get done without getting on a plane. I’ve cultivated all the healthy habits. That’s so much easier when you don’t have to navigate different time zones.

Because I have an addictive personality, I decided to use the extra time for good. Instead of binge-watching shows from my sofa, I only watch them on my treadmill. There were times I would be on my treadmill for two and a half hours watching episodes of “The Crown.”

After you left HuffPost, you founded Thrive Global, a wellness company that works with leading corporations. How has the pandemic focused your work?

I became aware of the connection between well-being and performance. The forced pause of the pandemic has made a lot of us look at what in our lives was not working, and commit to leaving those things behind. 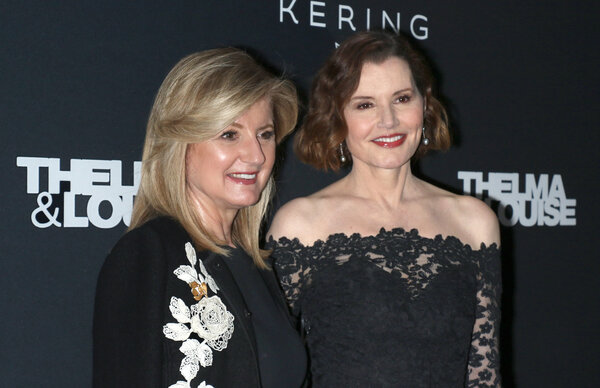 You have written that we are working more, but getting less done. Is our notion of productivity changing?

We had a false idea that productivity meant being “on” 24/7. But the data and science show categorically that there are diminishing returns when we are always on. We have an opportunity now to recognize that cycles of peak performance need to alternate with cycles of recovery.

You often cite science. Is that compatible with wellness?

We are working with some of the most skeptical executives and finding that they really resonate to the science. Some of them realize that these are not warm and fuzzy opinions, that they are grounded in data. Athletes like Tom Brady, who says he would not have been able to re-enter the Super Bowl without nine hours of sleep, also move the needle.

What moves the needle for you?

I had time to clean out my garage. I found a lot of journals from my 20s. What I found interesting is that in my 20s I sensed a lot of things that I now know to be true: that life is shaped from the inside out, that being unflappable and practicing gratitude are the keys to how our lives unfold. For me, an ironclad rule during these past months is to be grateful for the smallest things.

Favorite Charities: Museum of Arts and Design; Citymeals on Wheels

What’s been your safe harbor?

I’ve been in New York in my apartment on Park Avenue. I have a complete office here. The first thing I did after lockdown was to get a computer. I get up in the morning and have a little coffee and write to people. My savior has been that computer.

I understand that this year has been especially hard on you.

It’s been three months since my husband died. We were a pair from the time we met, together for 49 years. He was my pal and my lover. We built a life. But the pandemic took a major toll.

He had Parkinson’s for a number of years. He was a people person and lockdown meant he was not able to see his friends or walk to his office. I wanted him to live, but for the last five months he wanted to die. I had a difficult time resolving his death. I ordered a memorial to honor him, a website, DonaldToberForever.com.

Have you found other sources of comfort?

Last night I had dinner with five friends at the Mark. I’m vaccinated, but I’m careful on the streets. Still, I like the idea of going back to as much normality as I can. The computer has been a great palliative. Learning to use it gave the world to me.

You were an editor at Brides magazine for 30 years. What societal shifts occurred during that span?

I came in the ’60s. Customs were changing. You could write your own vows, plan your own wedding. We asked, “Why do people have to go broke to get married?” People, the older ones, wanted to be in charge. Instead of a big honeymoon, some chose to buy a house. They were making more sensible decisions. We promoted that.

Do you see a promising future for print magazines?

ArtTable, a nonprofit that advances the leadership of women in the arts, honored you this month at its virtual gala. What has kept the arts thriving during this period?

The pandemic contributed to more of a desire to be making things. Maybe you are embroidering, maybe you are embellishing. Whatever it is that you are doing, you are building.

Where have you been sheltering?

We have a house near Millbrook, N.Y. Our two eldest sons moved back from Los Angeles. The wonderful thing is having our children at home. One room on the ground floor is a library. I can close the door, look out my window and see the little pond with the ducks, or a woodpecker

You’ve been renovating Guild Hall in East Hampton. How will you ease it into the 21st century?

I want to distill it, to bring it back to what it was when Aymar Embury designed it in the 1930s, without spoiling its intimate scale. I don’t want to do anything that will make it look more important.

So, a discreet face lift?

People will walk in and feel like it’s been transformed without knowing quite how. It’s about making it feel opened up. When I first visited, I thought, “How do they even get the paintings in and out?”

You have returned to your office. What is that like?

We’ve been back, 10 or 12 of us out of 45, since August. We’ve had socially distanced happy hours, giving out individual bags of potato chips. We gave a recital with Ashley Park, a violinist, with a limit of 10 people. It was the first time in 12 months she’d been handed a check.

Has your team been more tied to the virtual world?

We were ahead with digital visualization, building rooms in virtual space. A client could put a headset on and look around a room. The challenge is that once you design that room, you have to fill it. We started a model of a virtual library. The sad thing was that all the shelves were empty. It costs $127 to buy one virtual book.

New York streets are teeming. Does that agree with you?

The outdoor dining is fantastic. There is a kind of theatrical aspect, especially at the fancier restaurants. Recently at La Goulue I saw a man walking by with a cute dog on a leash. He did three passes in front of the restaurant. It was obvious he was trying to meet women. Ordinarily he would have gone to the bar, but now that’s not possible. One must improvise.

Interviews have been edited.