A study commissioned by Prudential Singapore found that the Covid-19 pandemic has put further strain on Singaporeans’ financial planning.

Two reports were released on Monday (Sept 27) covering the the topics of financial planning amid a crisis and the pandemic’s impact on longevity.

The first report showed that more than half, or 54 per cent, of Singapore residents surveyed said they would struggle or be unable to meet their financial needs in the event of unexpected illness or job loss.

The study was conducted between May and June, with the participation of 1,218 residents. It examined how the pandemic has impacted Singaporeans’ ability to finance their retirement, assuming they live to be a 100, as well as their personal health and well-being in that scenario.

Similar surveys have been conducted in previous years.

In all, 47 per cent of respondents said their finances have worsened since the onset of the pandemic, and about one in five in that group described their financial deterioration as “considerable”.

The report also suggested that the pandemic seems to have caused some Singaporeans to adjust their personal financial strategies.

Ms Soh, who is also co-head of Asia-Pacific at asset management firm Schroders, said her teams have observed higher activity and volumes on online wealth platforms in the past 18 months.

More people have been actively managing their portfolios and diversifying their holdings as a de-risking strategy amid share market turbulence, she noted, adding: “People of different ages are more ready now to accept some risk to enhance their long-term returns.” 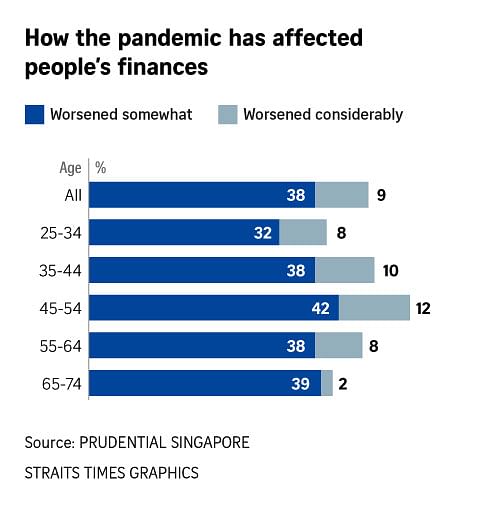 But the study also found an age divide in the use of wealth-related information.

Older respondents were more likely to value Government sources such as the Central Provident Fund, with 64 per cent of the oldest age group (65 to 74) indicating as much.

Meanwhile, the youngest ones in the survey (25 to 34) are as likely to value their relatives and friends (38 per cent) as sources of information as they are the Government (37 per cent).

“Singaporeans in (the latter) age group indeed appear to favour a balanced approach to obtaining wealth-related information, using a number of different sources in roughly equal measure,” said the report.

It noted that it is not clear whether the recent deterioration of many Singaporeans’ finances is temporary or long-lasting.

The report called for more to be done in ensuring citizens understand the risk of outliving their assets, integrating existing financial literacy initiatives, and helping older citizens keep up with digital finance.