With a pandemic raging, a spate of ads promised dubious remedies in the form of lozenges, tonics, unguents, blood-builders and an antiseptic shield to be used while kissing.

That was in 1918, during the influenza outbreak that eventually claimed an estimated 50 million lives, including 675,000 in the United States.

More than a century later, not much has changed. Ads promoting unproven miracle cures — including intravenous drips, ozone therapy and immunity-boosting music — have targeted people trying to avoid the coronavirus pandemic.

“History is repeating itself,” said Roi Mandel, the head of research at the ancestry website MyHeritage, which recently unearthed and compared pandemic ads published generations apart. “So many things are exactly the same, even 102 years later, even after science has made such huge progress.”

This year, a company with a California address peddled products containing kratom, an herbal extract that has drawn concern from regulators and health experts, with the promise that it might “keep the coronavirus at bay.” The Food and Drug Administration sent the company a warning in May.

The claims are an echo from 1918, when an ad for Dr. Pierce’s Pleasant Pellets promised that the pills — made from “May-apple, leaves of aloe, jalap” — offered protection “against the deadly attack of the Spanish Influenza.”

An ad for another remedy, Neuffer’s Lung Tonic, amplified the fear of the flu by noting that the pandemic’s death toll was “more than double our total war casualties.” Peruna, a widely popular medicine that later became synonymous with quackery, promoted itself by claiming that “nothing is any better” to help “ward off Spanish influenza.”

“Human beings haven’t changed all that much,” said Jason P. Chambers, an associate professor of advertising at the University of Illinois. “We’d like to believe we’re smarter, that we’d be able to spot the lies, but the ability of advertising to maintain its veneer of believability has only become more sophisticated over time.”

Everyday items were billed as health aids. Horlick’s promoted its malted milk product as “the diet during and after influenza” that was “endorsed by physicians everywhere.” N.B. Long & Son urged customers to “fight the flu with good eats,” such as seeded raisins. Mottman Mercantile Company said that “one of the best preventatives to keep away the ‘Flu’ is to provide yourself with good warm underwear.” 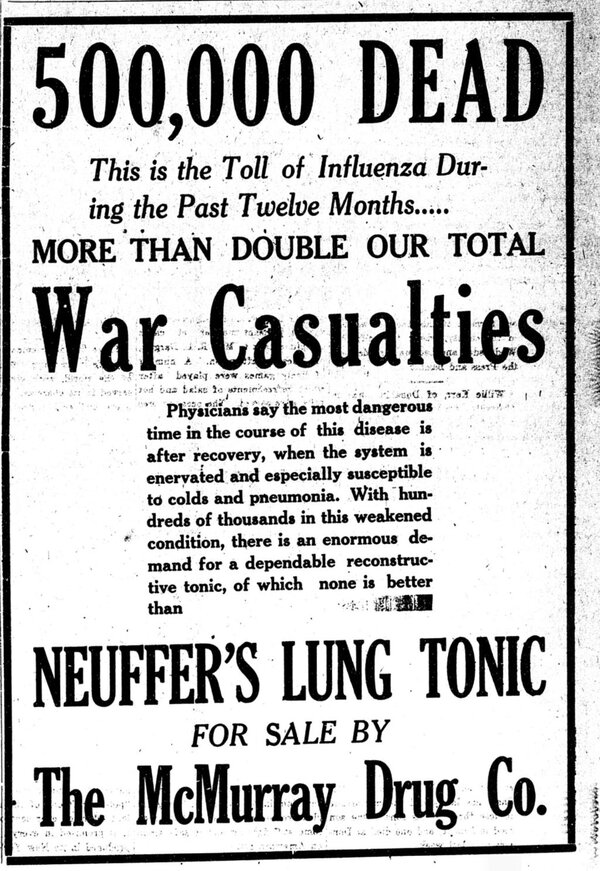 There were contraptions as well, including a screen fastened to a sterling silver handle like a miniature tennis racket, which served as a shield between lovers’ lips. An ad for the product told potential customers that they could “kiss your lady friend and you needn’t worry about germs.” There was also the Branston Violet Ray Ozone Generator, which was sold on the promise that it “keep your nasal passages, throat and lungs in a perfectly antiseptic condition.”

Advertising regulations were in their infancy in 1918. The Federal Trade Commission, which polices unfair or deceptive marketing, had been open for less than three years. Companies could still claim, with minimal evidence, that they were backed by science, more than a decade after the journalist Samuel Hopkins Adams showed that popular medicines were often made primarily with alcohol and sometimes with deadly toxins.

At the same time, advertising was gaining traction, making up more than 66 percent of newspaper revenue in 1920, up from 44 percent in 1880. Over roughly the same period, advertising revenue surged to $850 million from $30 million, according to data cited in the Journal of Historical Research in Marketing.

Since then, advertising has become a global business worth hundreds of billions of dollars. But regulators have struggled to keep up with deceptive advertisers, which are often smaller companies that make quick sales before suddenly disappearing, said Manoj Hastak, a marketing professor at American University and a longtime adviser to the F.T.C.

“I’m not sure there’s a clear sense that this will get any better when the next pandemic comes along,” he said. “Companies are just selling the same old falsehoods in new packaging, and the incidents are only increasing. The regulations are getting better, but the process is still quite slow and budgets are quite thin. It’s a bit of a Whac-a-Mole problem.”

In recent years, a surge of digital advertising has led to more space for ads on more platforms, and the ability to switch them out within seconds. But as print publications, broadcast television and other traditional media outlets tightened their advertising protocols, online advertisers began relying on automated auctions rather than human gatekeepers for placement.

Readers who find the examples of quack ads from 1918 laughably quaint should know that many examples from 2020 are no less absurd. They include marketing for Musical Medicine, a compact disc that plays “specifically formulated frequencies to assist in boosting your immune system and weakening the virus,” and the Eco Air Doctor, a clip-on device that emits chlorine dioxide gas. The makers of both products were among the dozens of companies that received warnings from the F.T.C. telling them to stop making unsubstantiated claims that they can help treat or cure the coronavirus.

As Americans begin receiving coronavirus vaccines from Pfizer and Moderna, authorities are worried that misleading advertisements might complicate the rollout or fuel skepticism about the treatments. Facebook said it would block ads that promoted the sale of Covid-19 vaccines or expedited access. Twitter and YouTube have banned content featuring unproven claims about the vaccines.

But algorithms meant to serve ads based on existing interests will continue to deliver problematic content to people who are inclined to believe it, said Michael Stich, the chief executive of CourtAvenue, a digital growth agency.

“There’s a lack of a public broadcast system within the internet,” he said. “My fear is that, because of how we take in information now, the circles where we choose to spend our time don’t have a common baseline of what is ‘true.’”