WASHINGTON — President Biden on Tuesday pressed business leaders to back his $1.9 trillion economic aid package, but received no public declarations of support for a $15 minimum wage that is part of the legislation and that the president has said is vital to providing relief for struggling Americans.

Mr. Biden hosted a group including the top executives of Walmart, Gap Inc. and JPMorgan Chase in the Oval Office as part of his push to rally support for his American Rescue Plan, which the House Education and Labor Committee began debating on Tuesday.

But some of the attendees, including Doug McMillon of Walmart and the chief executive of the U.S. Chamber of Commerce, Tom Donohue, have said they oppose Mr. Biden’s proposal to raise the minimum wage to $15 an hour from $7.25.

The president acknowledged some disagreements, telling reporters before the meeting that “we’re approaching this issue to see if we can find some common ground.” He expressed optimism that he and Democrats on Capitol Hill would succeed in winning broad-based support for the plan, citing his experience with persuading opponents on other issues.

“I know I have found some common ground with some of my Republican friends,” he said.

But there was no immediate sign of a new agreement between Mr. Biden and his guests on the minimum wage or any other issue. Jamie Dimon, the chief executive of JPMorgan Chase, was noncommittal in a statement after he left the White House.

“We had a constructive and detailed conversation that covered a lot of ground — the urgent struggles of so many Americans, a path to a sustainable and equitable economic recovery, and the future of American competitiveness,” Mr. Dimon said. 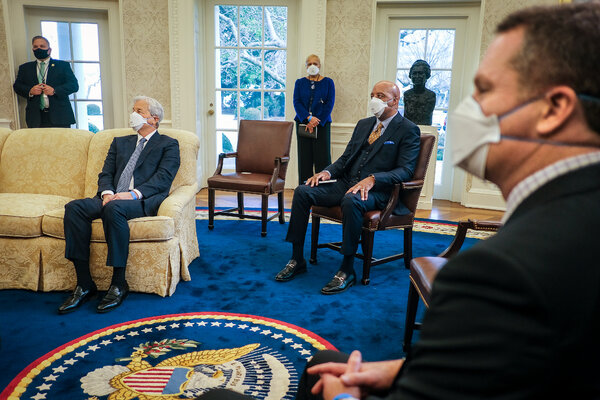 Mr. Dimon talked up the idea of an augmented earned-income tax credit, which could help increase pay for people at the lower end of the earning spectrum, as well as the need for creating clearer policy initiatives around issues of immigration, education and infrastructure that could benefit the economy over time, according to one person briefed on the details of the meeting.

Ms. Syngal spoke about the large numbers of women and people of color who work in retail, noting that the heavier toll the pandemic has taken on both groups has meant that the need for government aid in her industry seems especially pointed. Mr. McMillon, whose company raised wages for 165,000 hourly workers last year, spoke about Walmart’s approach to employee pay and its role in distributing vaccines, the person said.

Mr. Biden’s rescue plan includes direct payments of $1,400 per person for individuals earning up to $75,000 a year and, in a change Democrats agreed to this week, a rapid phase out in payments so that no household with income above $200,000 a year receives a check. Asked by reporters before the meeting if he supported that change, the president replied “yes.”

Shortly before the meeting, Mr. Biden’s spokeswoman described the Oval Office gathering as “the first of many engagements” that the president intends to have with company executives and leaders of business groups as he ramps up his efforts to lobby on behalf of his Covid-19 relief plan.

In her daily briefing for reporters, Jen Psaki, the White House press secretary, defended the minimum-wage proposal. A Congressional Budget Office report released on Monday said that a $15-an-hour minimum wage, as Mr. Biden wants, could cost the economy as many as 1.4 million jobs.

“The president supports it because he believes that raising the minimum wage is something that American workers, American families deserve, and that lifting 27 million American workers out of poverty, reducing inequality, would be a very positive step for our country,” Ms. Psaki said.

She said other provisions of the relief act would increase job growth, though the White House has not provided an estimate of how many jobs the plan would create. On Tuesday, Republicans on the House Ways and Means Committee wrote to the administration to formally request such an estimate in short order.

“This data is essential for members of Congress to have in advance of voting on any proposed Covid-relief legislation,” the Republicans, led by Representative Kevin Brady of Texas, said in the letter.

Senator Chuck Schumer of New York, the majority leader, said on Tuesday that he was fighting to include the plan to increase the minimum wage to $15 an hour by 2025 in the Senate’s version of the sweeping bill that Democrats are drafting to carry Mr. Biden’s plans. Mr. Schumer said he was working with the Senate official charged with interpreting the chamber’s rules to make sure the plan could pass muster according to strict standards for what can be included in a budget-reconciliation measure. Democrats are determined to advance the stimulus package as part of a reconciliation bill, which requires only a simple majority to pass and thus could be enacted, if necessary, without Republican support.

But it is unclear whether the wage increase qualifies under the restrictive rules, and Mr. Biden has said he does not expect it to survive. Mr. Schumer would not say whether Democrats would take the extraordinary step of trying to overrule the Senate’s parliamentarian, if necessary, to insist on its inclusion.

His remarks came as he appeared with the newly installed Democratic chairmen of the committees charged with considering the stimulus package, and just as the Senate was to begin the second impeachment trial of former President Donald J. Trump.

“To the pundits who said we can’t do both at once, we say you are wrong,” Mr. Schumer said. “We can and we are.” Asked by reporters on Tuesday afternoon if he was watching the trial, Mr. Biden said he was not.

Before the trial began, Republicans on the Senate Homeland Security Committee questioned Mr. Biden’s nominee to head the White House Office of Management and Budget, Neera Tanden, about past Twitter posts critical of Republicans.

The committee’s top-ranking Republican, Senator Rob Portman of Ohio, read several of those posts in his opening round of questions, including one in which Ms. Tanden referred to Senator Mitch McConnell of Kentucky, the minority leader, as “Moscow Mitch,” and another that said that “vampires have more heart than Ted Cruz,” the Republican senator from Texas.

Ms. Tanden apologized for those and other posts. “I deeply regret and apologize for my language, some of my past language,” Ms. Tanden said. “I recognize that this role is a bipartisan role, and I recognize I have to earn the trust of senators across the board.”