WASHINGTON — Biden administration officials have tried to project a tough line on China in their first weeks in office, depicting the authoritarian government as an economic and security challenge to the United States that requires a far more strategic and calculated approach than that of the Trump administration.

They have also tried to send a message: While the administration will be staffed by many familiar faces from the Obama administration, China policy will not revert to what it was a decade ago.

These early efforts have not concealed the enormous challenge President Biden faces in trying to formulate a strategy to deal with China at a time when any relations with Beijing are treated as thoroughly toxic in Washington. Political adversaries, including Republican lawmakers, have already begun scrutinizing the statements of Mr. Biden’s advisers, ready to pounce on any effort to roll back President Donald J. Trump’s punishments, including tariffs and bans on exporting technology.

Ted Cruz, the Republican senator from Texas, has placed a hold on the confirmation of Gina Raimondo, Mr. Biden’s nominee for commerce secretary, delaying a vote on her confirmation, for declining to explicitly commit to keeping the Chinese telecom company Huawei on a national security blacklist. Some Republican lawmakers have also criticized Linda Thomas-Greenfield, Mr. Biden’s pick for U.N. ambassador, for giving a speech at a Confucius Institute, an organization some have described as disseminating Chinese propaganda, and painting a rosy picture of China’s activities in Africa.

Several Republicans, including Senator Charles E. Grassley of Iowa, also put out statements last week criticizing a move by the Biden administration to withdraw a rule proposed during the Trump administration that would require universities to disclose their financial ties to Confucius Institutes, organizations set up to teach Chinese language and culture in American schools.

“The Biden administration is going to be on a very short leash with respect to doing anything that is perceived as giving China a break,” said Wendy Cutler, a vice president at the Asia Society Policy Institute and a former U.S. trade negotiator.

Mr. Trump’s supporters credit him with taking a far more aggressive approach than his predecessors to policing China, including dusting off many rarely used policy tools. That includes placing major tariffs on Chinese goods, limiting Beijing’s access to sensitive American technology exports, imposing sanctions on Chinese officials and companies over human rights violations and securing economic concessions from China as part of a trade deal.

But Mr. Trump’s critics, including many in the Biden administration, say his spate of executive orders and other actions were inconsistent and piecemeal, and often more symbolic than effective.

Even as Mr. Trump issued harsh punishments on some fronts, he also extended a lifeline to the Chinese telecom company ZTE, delayed sanctions related to human rights violations in China’s Xinjiang region and publicly flattered President Xi Jinping of China as he sought his trade deal. Many of the executive actions Mr. Trump took against China were left incomplete, or were riddled with loopholes.

And his policies may have worsened American competitiveness in some areas, according to a report published Wednesday by the consulting firm Rhodium Group and the U.S. Chamber of Commerce China Center. The report found steep costs from the kind of economic “decoupling” that Mr. Trump pursued, including a $190 billion annual loss in American economic output by 2025 if all U.S.-China trade was subject to the type of 25 percent tariff that Mr. Trump imposed on $250 billion of Chinese goods.

Daniel Rosen, a founding partner at Rhodium Group, said the Biden administration needed to consider more than politics or ideology when forging China policy, including carefully weighing the cost of its approach to industry.

“Obviously politics is king right here in this moment, with nobody in leadership or aspiring to leadership wanting to get outflanked on who is tough on China,” he said. “We’re not going to serve the American interests if we don’t consider commercial interests and national security interests at the same time.”

The Biden administration has argued that by being more strategic in how it addresses China, it will ultimately be more effective than the Trump administration. It has laid out an ambitious task as it looks to not only crack down on China for what it sees as unfair trade practices but also develop a national strategy that helps build up America’s economic position to better counter Chinese competition.

Speaking at the Atlantic Council in late January, Jake Sullivan, the national security adviser, said the United States first needed to “refurbish the fundamental foundations of our democracy” by dealing with issues like economic and racial inequity, as well as making investments in emerging technologies like artificial intelligence, quantum computing and clean energy.

Mr. Biden has also emphasized the importance of working with allies and international institutions to impose a tougher global stance, so companies do not sidestep strict American rules by taking their operations offshore.

Mr. Biden held his first call with Mr. Xi on Feb. 10, in which he talked about preserving a free and open Indo-Pacific and shared concerns about Beijing’s economic and human rights practices, according to a White House readout.

In a town hall-style forum broadcast by CNN on Tuesday night, Mr. Biden, who knows Mr. Xi well from meetings during the Obama administration, said he had taken a tough line on human rights and other issues during their two-hour call.

“There will be repercussions for China, and he knows that,” Mr. Biden said. “What I’m doing is making clear that we, in fact, are going to continue to reassert our role as spokespersons for human rights at the U.N. and other — other agencies that have an impact on their attitude.”

Mr. Biden has begun staffing his cabinet with officials who have deep experience with China. Katherine Tai, the Biden administration’s nominee for trade representative, was in charge of litigating cases against China at the World Trade Organization during the Obama administration, and has promised to take a tough line on enforcing American trade rules. 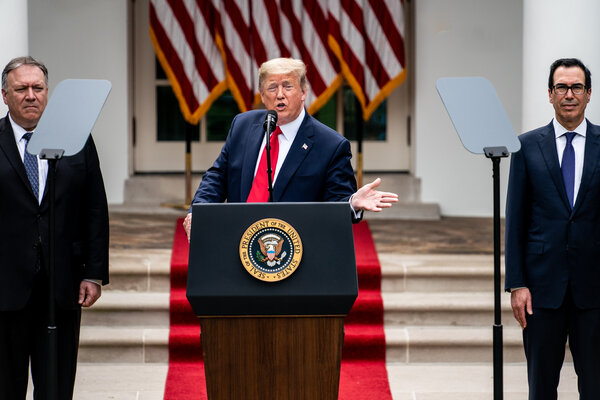 Ms. Raimondo, the commerce secretary nominee, will also have purview over economic relations with China, particularly those related to technology. While she had harsh words for China during her confirmation hearing, her refusal to commit to keeping Huawei on a government blacklist drew criticism from Republican lawmakers like Mr. Cruz.

Treasury Secretary Janet L. Yellen, who is expected to play a pivotal role in relations with China, took a hawkish tone at her confirmation hearing last month, vowing to use the “full array” of America’s tools to combat “illegal, unfair and abusive” practices. She has also criticized China’s practices of stealing intellectual property and subsidizing state-owned enterprises, but said she did not regard Mr. Trump’s tariffs as “the proper focus” of trade policy.

The new administration has given few concrete details about how it will put its strategy into practice, including whether it will implement the many China-related executive orders Mr. Trump introduced, like new restrictions on investments in Chinese companies with ties to the military and bans on Chinese-owned apps, like TikTok, WeChat and Alipay. Instead, the administration has said it would carry out a comprehensive review of Mr. Trump’s tariffs, export controls and other restrictions before making decisions.

Another uncertainty is how Mr. Biden and his team will handle Mr. Trump’s initial trade deal with China given that Beijing continues to fall short of its promise to buy hundreds of billions of dollars in American products. The administration may face the choice of using the deal’s enforcement mechanisms — which include consultations and more tariffs for Chinese products — or scrapping the agreement altogether.

Scott Kennedy, a senior adviser in Chinese business and economics at the Center for Strategic and International Studies, said the Biden administration had clear foreign policy goals and a large toolbox of measures at its disposal, but had not yet “figured out how to merge strategy and tactics.”

Mr. Biden’s plan to engage more closely with U.S. allies to put pressure on China may also be easier said than done.

In an interview in January, shortly before he left office, Robert Lighthizer, Mr. Trump’s top trade official, pointed to a recent investment agreement the European Union signed with China, against the wishes of the Biden administration, as “the first piece of evidence” that such multilateral cooperation would be difficult.

Chinese officials are already strengthening ties with U.S. allies like New Zealand and South Korea in an effort “to divide and conquer,” Ms. Cutler said.

China has emerged from the early stages of the pandemic emboldened, with its factories and businesses outpacing those in the United States and Europe, where the coronavirus continues to hamper the economy. While Chinese leaders are seeking to reset relations with Washington after a tumultuous period under Mr. Trump, they have continued to make sometimes hard-edge statements.

In an interview with CBS News on Feb. 7, Mr. Biden said the two countries “need not have a conflict. But there’s going to be extreme competition.”

“I’m not going to do it the way Trump did,” Mr. Biden added. “We’re going to focus on international rules of the road.”