Heathrow Airport has urged the government to reopen the UK economy to fully vaccinated travellers from the EU and US by the end of the month after revealing coronavirus crisis losses of almost £3bn to date.

The company said expensive COVID testing requirements were hampering an effective reopening of the skies, while it also reported that the UK was falling behind its EU rivals in international trade by being slow to remove restrictions.

Live COVID updates from the UK and around the world Heathrow said fewer than four million people travelled through the hub airport during the first six months of 2021 – a level that would have been surpassed by 18 days’ worth of traffic in pre-pandemic times.

It posted a loss before tax of £868m compared to a figure just above £1bn for the same period last year, as demand for international travel slumped in the face of the first lockdowns Europe-wide.

The figure took its cumulative losses to £2.9bn, Heathrow said, adding: “Recent changes to the government’s traffic light system are encouraging but expensive testing requirements and travel restrictions are holding back the UK’s economic recovery and could see Heathrow welcome fewer passengers in 2021 than in 2020.”

It said that cargo volumes remained 18% down on pre-pandemic levels while rivals, such as Frankfurt and Schiphol, were up by 9%.

“Britain is losing out on tourism income and trade with key economic partners like the EU and US because ministers continue to restrict travel for passengers fully vaccinated outside the UK,” the statement continued.

“Trade routes between the EU and the US have recovered to nearly 50% of pre-pandemic levels while the UK remains 92% down.”

It said that unless the government acted, the sector must be continue to be supported through an extension of the furlough scheme beyond September and business rates relief – the latter worth almost £120m to Heathrow.

Chief executive John Holland-Kaye said: “The UK is emerging from the worst effects of the health pandemic, but is falling behind its EU rivals in international trade by being slow to remove restrictions.

“Replacing PCR tests with lateral flow tests and opening up to EU and US vaccinated travellers at the end of July will start to get Britain’s economic recovery off the ground.” 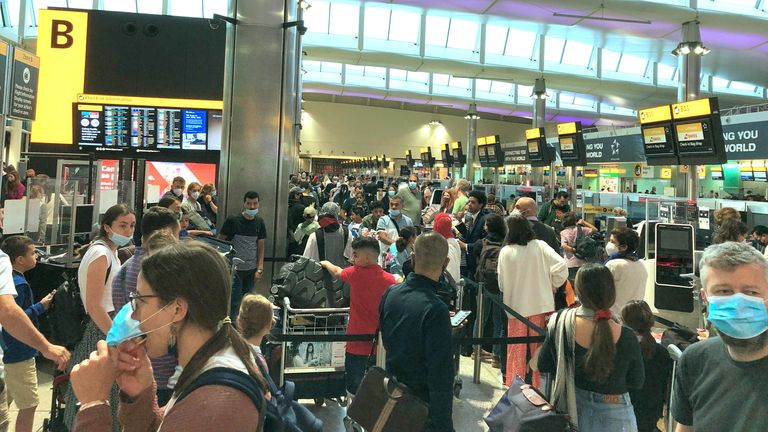 He was speaking following a weekend in which COVID checks were blamed for long queues at Heathrow’s arrivals halls on what was its busiest day of the year so far.

Significant waiting times were also reported at check-in desks and at UK airports more widely where staff shortages as a result of the so-called ‘pingdemic’, that has forced personnel to self-isolate if identified as a close contact by the NHS COVID app, were blamed for waits of over two hours.