MILAN — Gucci has secured the top position in the BrandZ 2021 Top 30 Most Valuable Italian Brands ranking by Kantar, which measures the value of brands by combining financial data with brand equity research.

The fashion house leads the list for the third year, with a brand value that increased 12 percent to $33.8 billion compared to 2020.

Six other luxury brands also appear in the ranking. Prada is the second-most valuable brand among fashion and luxury players with an almost $4 billion value, which secured the house the sixth position on the list, behind automotive company Ferrari.

Fendi and Bottega Veneta were among the fastest risers, with the brand value of the former increasing 48 percent to $3.2 billion and that of the latter up 54 percent to $2.2 billion. They ranked eighth and 12th, respectively, followed by Armani, 13th, with a brand value of $2.1 billion.

Bulgari and Salvatore Ferragamo ranked 15th and 19th, respectively, but registered opposite trends. The former grew 27 percent to $1.6 billion, while the brand value of the latter decreased 11 percent to $1.1 billion compared to last year.

“Being recognized as a leader in your 100th anniversary year is symbolic of a brand’s capacity to ensure that it has remained contemporary, and I think that’s actually one of Gucci’s greatest strengths: its capacity to reinvent and constantly ensure that it is relevant for today,” Robert Triefus, executive vice president, brand and customer engagement at Gucci, told WWD.

He credited the label’s creative director Alessandro Michele for his contribution in this approach, noting that one of the key elements of the designer’s tenure has been his deep knowledge of Gucci’s archive and how “he tells the stories through the archive in a very contemporary way, which helps the brand to engage not just with a generation that has grown up with Gucci but also with generations for whom Gucci is a new experience.”

To this end, Gucci’s “digital first” approach additionally played a pivotal role in involving and increasingly engaging this cross-generational community, therefore powering the company’s brand value increase in the past couple of years.

For Triefus, digital encompasses every aspect, including “the way that we’re more intelligent about how we distribute our product or how we ensure we’re providing seamless and engaging experiences for our customers, especially in a world where social distancing has become part of the way we’re doing business.”

The executive underscored that the company has nurtured such an ecosystem very carefully in the past few years and believes that the digital push will only grow in the future. In addition, another driver will be client-centricity, an approach that needs to be provided across the board with a “combination of art and science.”

“First of all, you have to have the infrastructure, the technological platform that allows you to reach your client across every different touch point in a timely and customized way…but then the art is what needs to be combined with that,” he said, underscoring the importance of storytelling. “If the content is right, the delivery systems are correct and if it’s personalized, then you kind of have the recipe to success.”

Gucci’s own recipe for success also has a generous dose of inclusivity, according to Triefus. “Historically luxury was very much at a distance and what Alessandro Michele and Marco Bizzarri [the brand’s chief executive officer] both did was extremely disruptive at the beginning, it broke the rules in a way,” he said, adding that now “exclusivity needs to be inclusive, you need to allow people to enter into your world and community, and have an exchange.”

For Triefus, inclusivity adds to diversity and sustainability, which are all values that became even more important during the pandemic and that especially younger generations are expecting from the brand they purchase.

Overall, the COVID-19 disruption and subsequent recession didn’t dent the performance of the Top 30 Italian companies on the BrandZ list, whose total brand value increased 11 percent to $114.6 billion in 2021. In particular, 17 companies on the list increased their value by an average of 24 percent. 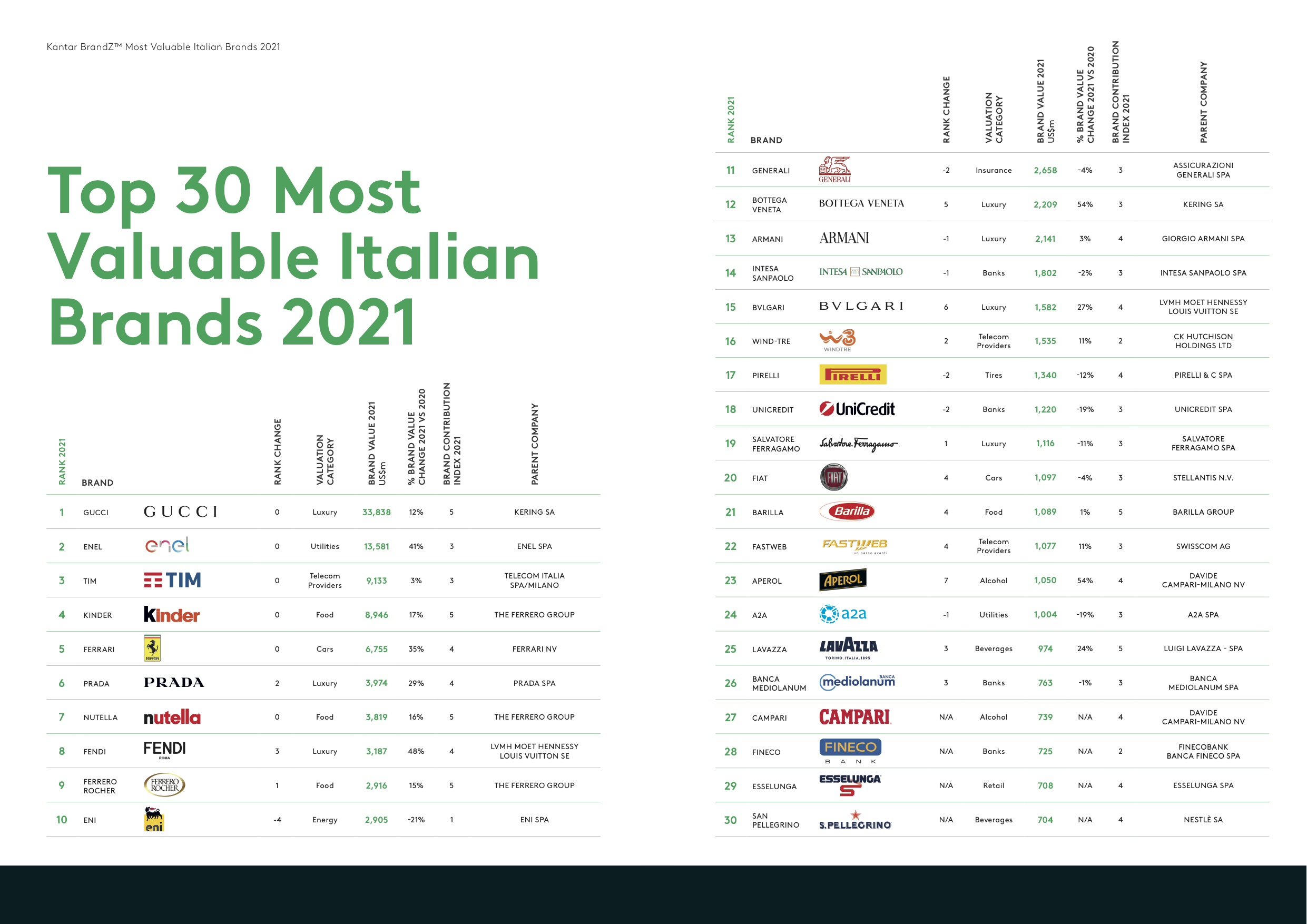 The Top 30 Most Valuable Italian Brands ranking by BrandZ. Courtesy of Kantar BrandZ

The acceleration of digital marketing strategies has provided opportunities for brands not only in fashion but across a range of different categories. While Italian luxury brands accounted for 42 percent out of the total brand value of the Top 30, another 12 categories were represented in the ranking, with telecommunication companies, energy, food and automotive players also appearing in the first 10 positions.

In particular, utilities company Enel was the second-most valuable Italian brand with $13.6 billion, followed by Tim, Kinder and Ferrari, valued at $9.1 billion, $8.9 billion and $6.8 billion, respectively.

The BrandZ Italian list is compiled by combining financial analysis of each label for the most recent fiscal year with surveys distributed to almost 70,000 Italian consumers. A Top 100 Most Valuable Global Brands list is also issued annually, combining market data with opinions of more than 3.8 million consumers worldwide.