Britain this morning recorded its highest temperature ever, bringing parts of the country to a standstill and testing infrastructure. 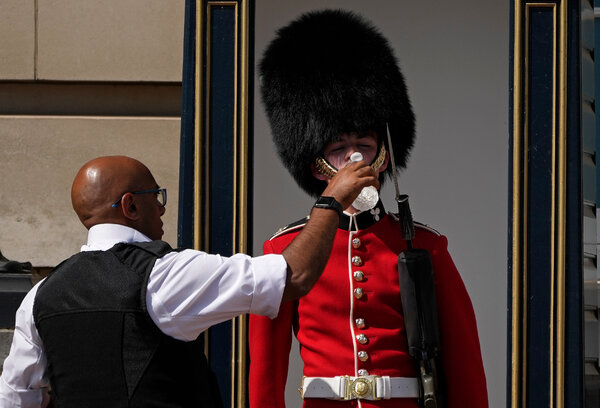 The European heat wave that baked Italy, France and Spain over the past week has reached London, putting life on hold and testing infrastructure. Britain this morning recorded its highest temperature ever, as the heat led some schools, museums and doctors’ offices to close, and some trains and flights to be canceled. Forecasters reported temperatures of 40 degrees Celsius, or 104 degrees Fahrenheit, today in London. Officials issued Britain’s first “red” warning for extreme heat, declaring a national emergency in a country accustomed to temperate weather, where few homes have air conditioning. In the U.S., President Biden reportedly may declare a climate emergency as soon as this week, according to The Washington Post.

The human toll of the heat wave has been alarming. Hundreds of people have died across Europe. Thousands more have had to flee wildfires in Spain, France and Greece.

Extreme heat is also hurting the economy, according to a study last year by European economists and climate experts. The researchers estimated that heat waves on average had lowered overall annual G.D.P. growth across Europe by as much as 0.5 percent in the past decade, potentially more than twice the damage they estimated from heat waves in previous decades. The reason: Extreme heat tends to lower productivity, currently for those who work outside, but increasingly for people who work inside, too.

It’s been a pressure cooker of a summer for businesses and consumers in Europe. Inflation, as elsewhere, is at its highest level in decades. What’s more, the war in Ukraine has raised oil and gas prices, as Russia has threatened to cut off supplies. Last week, a draft report from the European Commission lowered its economic outlook this year for the euro area to 2.6 percent G.D.P. growth, having predicted 2.7 percent in May, and just 1.4 percent growth next year, down from a May forecast of 2.3 percent.

The heat has already caused major disruptions to harvests, pushing food prices higher. Wildfires in Spain, Portugal, France, Greece and Italy, which is experiencing one of its worst droughts on record, are destroying crops or threatening to reduce yields. Coldiretti, the Italian farmers’ association, said that each fire costs Italians more than 10,000 euros per hectare — around $25,000 an acre — from extinguishing the fire and rebuilding the economic and environmental system over a period of 15 years. The group estimates that production of wheat in Italy will decline by 15 percent because of an increase in production costs and the drought.

Europe’s heat wave is sure to further exacerbate its energy crunch. The European energy crisis was already expected to cost the region’s countries $200 billion. Yesterday, Uniper, one of Germany’s largest power producers, said that higher gas prices and rising demand for power as temperatures rise had burned through nearly all of the company’s cash, and it was going to need a government bailout.

Lucrezia Reichlin, an economics professor at the London Business School, said that the heat wave was straining European economies that were already in a fragile state. Government finances were affected, too, she said, as countries that had spent heavily on pandemic relief took expensive measures to help consumers cope with high energy prices. “The combination of these things is all negative — the question is how negative it’s going to be.”

Scaramucci’s SkyBridge suspends withdrawals in one of its funds. SkyBridge Capital, which is run by Anthony Scaramucci, Donald Trump’s communications director for 11 days, was reportedly forced to suspend redemptions from one of its smaller funds that took heavy losses from crypto and stock investments. A pivot into crypto late last year also hurt the performance of SkyBridge’s larger fund, the Multi-Adviser Hedge Fund Portfolios, which had $2 billion in assets as of March and was down by 17 percent in the first five months of the year, according to a shareholder letter from early June that was seen by DealBook.

Apple reportedly plans to slow its hiring. The changes, which will apply to only certain teams, will help the company cope with a potential economic downturn, Bloomberg reported. Companies including Alphabet, Meta and Snap have cut budgets in recent weeks, and some, like Tesla, have made cuts to staff amid a broader slide in markets.

Elon Musk and Twitter’s lawyers prepare for their first Delaware meeting. Both teams will present this morning before Judge Kathaleen McCormick (virtually, because she has Covid). Twitter is pushing for an expedited four-day trial in September, while Musk’s lawyers propose February. The court has provided a public access line to listen to proceedings: 774-267-2687.

Aides to eight of the most progressive members of the House file petitions to form unions. It is the first substantial action by congressional staff to organize collectively for better working conditions and paves the way for House aides to negotiate working conditions, paid and sick leave, and promotion policies without the threat of retaliation — a right federal workers already have.

Iran’s national energy company reportedly signs an agreement with the Russian state-owned energy giant Gazprom. The memorandum of understanding, worth about $40 billion according to Iran’s oil ministry news agency, comes as the Russian president, Vladimir Putin, travels to Iran today for a rare international visit, as sanctions drive the two countries closer.

Yesterday, Bank of America and Goldman Sachs reported their profits for the second quarter, making them the last of the nation’s largest financial firms and Wall Street powerhouses to do so. Bank of America’s profit fell by a third from the same period last year. Profit was way down at Goldman, too, but as with Citigroup last week, strong trading revenue allowed it to report better-than-expected earnings. Here are the takeaways:

Markets were volatile, but there was money to be made in trading. Second-quarter profits at all the banks were down from a year earlier. But in some cases, the decline wasn’t as severe as analysts had expected. Consumers continued to spend and borrow.

The economy may slow, but it won’t slip into outright contraction, bank chiefs said.

“Nothing in the data that I see signals that the U.S. is on the cusp of recession,” Jane Fraser, Citigroup’s chief executive, said on a conference call.

“We’ve looked a lot, very carefully, into our actual data,” Jeremy Barnum, JPMorgan’s chief financial officer, said on a call with reporters. “There is essentially no evidence of actual weakness.”

“It’s a challenging market, but I think it is important to say that it’s not 2008 complicated,” James Gorman, Morgan Stanley’s chief executive, told analysts.

Although most individual investors lost money in the second quarter, market volatility was a boon for the banks. That was particularly true at Goldman Sachs, where trading revenue rose by 31 percent, outpacing rivals’. In the wake of the financial crisis over a decade ago, the large banks, driven in part by regulators and changes in the law, promised to shy away from risky bets in the market. Now, many generate an increasing portion of their revenue from trading, though they still say they are taking fewer risks than before.

“If they cannot trust any of the banks anymore, and they already don’t trust the housing market, then what would that do to people’s sense of security about their livelihoods?”

— Zhiwu Chen, a professor of finance at the University of Hong Kong, on the fallout from a banking scandal in China that exposed systemic issues in the country’s financial system.

Trump Media deal said to have leaked months in advance

Months before former President Donald Trump’s social media company announced its $300 million deal with a SPAC, employees at a little-known Miami investment firm had learned of the pending merger, three people familiar with the firm’s internal discussions told The Times’s Matt Goldstein. Now, federal authorities are investigating an unusual surge in trading in the days before the deal with the SPAC, Digital World, was announced.

Federal prosecutors and securities regulators are trying to determine why traders snapped up millions of warrants issued by Digital World just days before the Oct. 20 announcement of its merger with Trump Media. (Warrants entitle holders to buy shares of a stock at a predetermined price.) The day after the deal was announced, shares and warrants of Digital World surged, with the stock price rising by 350 percent and the price of the warrants by nearly 1,300 percent.

A federal grand jury in Manhattan issued subpoenas seeking information about a Miami investment firm, Rocket One Capital, among other things, Digital World said in a recent filing. A top Rocket One executive, Bruce Garelick, was on the board of Digital World until he resigned in recent weeks.

The exact scope of the federal investigations remains unclear. The authorities have not accused anyone of wrongdoing, and representatives of Garelick and others denied doing anything improper.

But Rocket One officials are said to have discussed ways to profit from the pending deal. Two of the people familiar with Rocket One’s internal discussions said Garelick mentioned the possible merger with Trump Media to some employees last summer. Around that time, a Rocket One employee was told to conduct a financial analysis of Digital World, including its warrants, one of the people said. Carl Schoeppl, a lawyer representing Garelick, declined to comment.

It’s the latest blow for the Trump SPAC deal. Federal authorities are also investigating whether Digital World’s disclosures about the merger talks with Trump Media violated rules for SPACs. And the S.E.C. is considering whether to block the merger altogether. With other investor commitments depending on the deal, that would deprive Trump Media of $1.3 billion.

SoftBank is reportedly halting its plan for a London I.P.O. of the chip designer Arm because of the political turmoil in Britain. (FT)

Bill Perkins, a top U.S. energy trader, is recruiting a team to launch a U.K. office to capitalize on opportunities in Europe, such as soaring gas prices. (FT)

Covid cases are again rising across the U.S., but public health authorities are sounding only quiet warnings. (NYT)

Best of the rest

The board of the Pulitzer Prizes rejected Donald Trump’s request to toss out wins for coverage of Russian interference in the 2016 election and Russian ties to his presidential campaign. (NYT)

Workers are shrugging off mandates to return to the office. (Fortune)

Ken Griffin, the founder and C.E.O. of the hedge fund Citadel, and his new Palm Beach neighbors are not getting along. (Daily Beast)

We’d like your feedback! Please email thoughts and suggestions to [email protected]