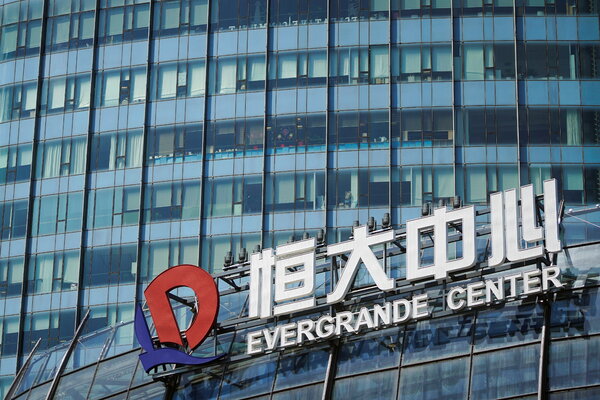 Fears of the fallout from Evergrande’s potential collapse faded somewhat as Chinese regulators reportedly instructed the embattled property developer to repay some of its debts and China’s central bank injected money into the country’s financial system. Evergrande’s stock jumped nearly 20 percent today, even as large holders said that they might dump their stakes and doubts swirled around an $83 million interest payment on a dollar bond due today.

Market watchers are assessing the implications of a potential restructuring of Evergrande’s $300 billion in debts. A full-blown bailout is unlikely, analysts say, but Beijing has the means to limit the damage if the company fails. “We believe that Evergrande is an exceptional case that is unlikely to lead to a broader systemic crisis in the property sector,” Houze Song of the Paulson Institute wrote in a recent report.

International investors in Evergrande’s bonds are preparing for turmoil — and in some cases buying more. Evergrande’s debt is in the portfolios of many major investment firms, and some hedge funds have been adding more to their holdings as prices have tumbled. A group of bondholders has tapped restructuring advisers at Kirkland & Ellis and at Moelis. For its part, Evergrande has hired the firms Houlihan Lokey and Hong Kong Admiralty Harbour Capital. How might the negotiations play out?

U.S. institutional investors are largely invested in Evergrande’s offshore bonds, which are worth a relatively small portion of the company’s overall debt. Those securities are linked to various private and public companies separate from Evergrande’s property business, such as an electric-vehicle division. The units could still have value even if the real-estate business defaults, and bonds issued by Evergrande’s Cayman Islands-based units are governed by different rules than the debt issued in mainland China.

Beijing’s intentions are unclear, especially when it comes to prioritizing debt holders at home and abroad. In the bankruptcy of Dubai World, in which confidence in a country’s financial system was similarly wrapped up in a single company, the company managed to pay back its creditors. But Dubai is a big borrower that relies on international credit markets, quite unlike China, which has recently discouraged local companies from listing abroad, among related measures. Despite all the uncertainty, with prices on some of Evergrande’s offshore dollar bonds that mature within months trading below 30 cents on the dollar, bargain hunters with a big appetite for risk see a bet worth taking.

Boosters for some, but not for all. The F.D.A. approved an extra dose of the Pfizer-BioNTech coronavirus shot for people 65 and older and for those at risk of becoming severely ill from Covid. Separately, President Biden said that the U.S. would purchase 500 million more doses of the Pfizer vaccine to donate abroad.

Facebook’s chief technology officer is leaving. In a rare change to the company’s top ranks, Mike Schroepfer will depart as the tech giant faces scrutiny for issues as varied as toxic speech, misinformation and privacy.

Lawmakers take aim at key SPAC sponsors. Senator Elizabeth Warren and other Democrats sent letters to serial backers of blank-check investment vehicles, including Michael Klein and Chamath Palihapitiya, expressing concern about “misaligned incentives.” They asked the financiers to respond to a list of questions about how their SPACs work by Oct. 8.

The next U.S. comptroller of the currency could be a Bitcoin skeptic. President Biden is reportedly set to nominate Saule Omarova, a law professor who has criticized cryptocurrencies and said that regulators (like the office of the comptroller) should oversee fintech firms as closely as banks.

The White House moves to limit a major driver of climate change. The E.P.A. is expected to announce today a rule that would reduce the use of hydrofluorocarbons, or HFCs, which are widely used in air-conditioners and refrigerators. Experts said that the change would be a major step in cutting the country’s greenhouse gas emissions.

For the Fed, is now the time?

The Federal Reserve said yesterday that it could soon slow the large-scale bond purchases that have propped up the economy during the pandemic. “It’s time for us to begin to taper them,” Jay Powell, the Fed chair, said. With that end in sight, DealBook asked some experts whether it was the right time to pull the plug on the extra support.

Adam Posen, the president of the Peterson Institute for International Economics and a former top adviser to the Bank of England, said that before the pandemic, Powell promised he would allow inflation to rise to make the economy more inclusive. Now, the Fed has reverted to worrying about inflation when millions are still out of work and price increases are the result of supply-chain problems, Posen said. “If inflation comes in higher than expected, the Fed is going to tighten faster than it should want, and that is a mistake,” he said.

Vincent Deluard, the global macro strategist at StoneX, said that the Fed’s pledge to get the official unemployment rate back down to where it was before the pandemic had led it to take too long to taper. “The idea that we are going back to something where people are as tied to a full-time employer as they were before is probably something that is impossible to achieve,” he said.

Robert Eisenbeis, a former top Fed staffer who is now the chief monetary strategist for Cumberland Advisors, is critical of the ambiguity around the Fed’s plan, which could stoke market volatility. Powell said that a specific timeline for tapering had not been set, and that at least one more month of solid job growth was necessary. “Powell has said the Fed has a ‘wonderful framework for communication,’” Eisenbeis said. “It’s garbage.”

► “There just came a point where I didn’t know what to believe about Theranos anymore.”

— The former Theranos director Jim Mattis, giving testimony at the trial of Elizabeth Holmes. The retired four-star general and former defense secretary said that he had been misled by the claims made by Holmes, the founder of Theranos.

► “It’s clear that you think AMC should accept Dogecoin. Now we need to figure out how to do that. Stay tuned!”

— Adam Aron, the C.E.O. of AMC Entertainment, the theater chain and meme-stock darling, after conducting a poll on Twitter.

► “The hard-working warehouse employees who have helped sustain us during these unprecedented times should not have to risk injury or face punishment as a result of exploitative quotas.”

— Gov. Gavin Newsom of California, who signed a bill yesterday that restricts warehouse operators from setting certain productivity quotas, which could alter Amazon’s labor practices. Business groups said that it would lead to litigation and supply-chain disruptions.

Shares of Toast, a company that makes technology for restaurants, jumped more than 50 percent yesterday in its first day of trading. It closed the day with a market capitalization of more than $30 billion, up from an $8 billion private valuation in November. DealBook spoke with Chris Comparato, Toast’s C.E.O., about the company’s debut — and about what’s in store.

“We had a great roadshow, there was a ton of investor interest,” Comparato said. The company priced its I.P.O. above an already raised target range, giving it a market cap of $20 billion going into the start of trading yesterday. “We felt like we priced where the business was valued,” Comparato said. “At that point, we said, ‘Pens down.’”

Toast had to lay off about half of its staff early in the pandemic as restaurants closed during lockdowns. But helping restaurants adapt to delivery and takeout orders — what Comparato calls “an omnichannel, off-premise experience” — has become a boon for Toast, which brought in $703 million in revenue in the first half of 2021, more than in all of 2019.

A look inside Robinhood during meme-stock mania

The trading app Robinhood has grown explosively, gone public and, for good measure, is now getting into crypto wallets. But internal exchanges between company managers revealed in a new legal filing — featuring Robinhood’s C.E.O., Vlad Tenev — highlight the tensions between fast growth and consumer protection.

A class-action lawsuit brought by Robinhood users alleges that the company was negligent during a period of extreme market volatility in late January, knowing it had insufficient capital to handle all the trading by new and existing users. That ultimately led the company to impose limits on trading in meme stocks like GameStop and AMC, the subject of subsequent congressional hearings.

Here’s a glimpse inside Robinhood in the days before it limited trading in meme stocks:

Jan. 23: As Robinhood discussed how to manage the risks of the frenzied trading in GameStop, a company insider wrote that “the process outlined above covers firm risk well, but from a public perception POV, we may want to consider the risks our customers face. Is there a comms need or other action we should consider?”

Jan. 25: Company engineers and executives chatted about surging trading volumes. “There are internal things that are starting to buckle under pressure,” a software engineer wrote. An engineering executive noted that a “code yellow” could be declared, putting all other work at the company on hold. “Only the paranoid survive,” Tenev responded. “One who panics first panics best,” added the company’s head of data science. “Joy,” said Tenev.

Jan. 28: Robinhood limits trading in meme stocks during the peak of the short squeeze, facing inquiries from the National Securities Clearing Corporation about whether it had enough capital to cover the trading risk. In an internal chat, Robinhood’s chief operating officer, David Dusseault, wrote that the company was “to [sic] big for them to actually shut us down.”

Veritas Capital and Elliott Management, the owners of Athenahealth, are reportedly considering a sale or I.P.O. that could value the health tech firm at more than $20 billion. (Bloomberg)

The trading platform eToro delayed to the fourth quarter its plan to list via a SPAC merger. (CoinDesk)

The E.U. unveiled a plan to require a standard charging port for all smartphones, tablets and other devices sold in the bloc. (NYT)

Best of the rest

Automakers will lose out on more than $200 billion in sales because of the global chip shortage. (Bloomberg)

Apple is not letting Fortnite back on the App Store until the verdict in its court case with Epic Games is final. (WaPo)

We’d like your feedback! Please email thoughts and suggestions to [email protected]