Oprah Winfrey pulled off what has become a rare television event: the tell-all interview that turns into a cultural moment. On Sunday, an audience of more than 17 million watched bombshell revelations tumble out of the mouths of Meghan Markle and Prince Harry as they described their lives under the palace gaze in a two-hour CBS special that rivaled any of the royal dramas on the Netflix series “The Crown.”

Social-media discussion of the show has continued since the credits rolled, leaving many people who missed it wondering where they could stream it. For the next 30 days, the special will be available on CBS.com and the CBS app. But after that, it will not have a home on any streaming platform.

That’s because, from the start of negotiations, Ms. Winfrey’s company, Harpo Productions, the owner of the program, envisioned the special as something suited to a big broadcast network, three people with knowledge of the deal said. Harpo did not even attempt to sell the streaming rights to Netflix or Paramount+, the streaming platform owned by CBS’s parent company, ViacomCBS, the people said.

Ms. Winfrey’s company also did not approach cable networks when seeking the right venue for the special, the people said. Hoping for the greatest possible reach, she sought a deal with one of the major broadcast networks, which do not require a subscription and consistently draw the largest audiences for live viewing. Harpo also liked the idea of appearing in the Sunday night slot after “60 Minutes,” the highly rated CBS News show where Ms. Winfrey was a special correspondent in 2017 and 2018, the people said.

As part of the $7 million deal, ViacomCBS won something valuable: the rights to broker international distribution on behalf of Harpo. The program aired Monday on ITV in Britain and will be available in more than 80 countries. 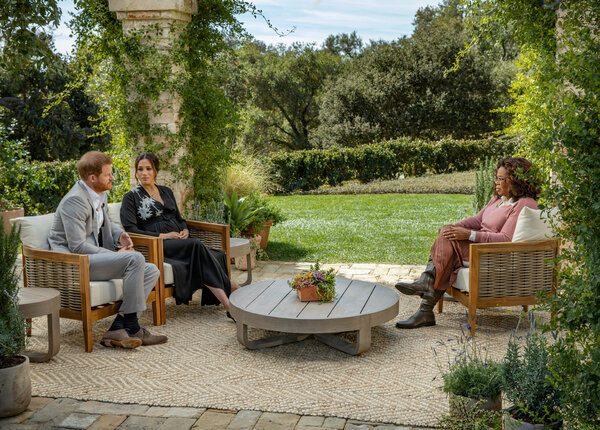 Ms. Winfrey revealed during the interview that she had spent about three years trying to land the exclusive. Along the way, she went into business with Meghan and her husband. Adding to the jumble of media alliances, the couple in 2019 cut a deal with Ms. Winfrey to produce a documentary series about mental health that is scheduled to stream on AppleTV+.

Some industry observers were surprised by the CBS deal because of another corporate entanglement: Ms. Winfrey’s long relationship with Discovery Communications, the cable giant that invested in her cable network, OWN, over a decade ago. David Zaslav, Discovery’s intensely competitive chief executive, decided to continue the investment even after OWN experienced growing pains early on. The company now controls the network, which has become a ratings success. Discovery also recently launched its own streamer, Discovery+, where Ms. Winfrey hosts an interview series, “Super Soul.” (The company bought advertising time on the CBS special and provided a commercial featuring Ms. Winfrey.)

It turns out that digital television, originally meant as a convenient alternative to clunky cable, can be just as knotty and cumbrous as the business it’s trying to replace.

The morning after her interview with the Sussexes, Ms. Winfrey appeared on “CBS This Morning,” a program anchored by her close friend, Gayle King, where she presented extra material that didn’t make the special. CBS announced on Tuesday that it will show the special again Friday night at 8.