On Sept. 23, Dr. Stephen M. Hahn left a virtual meeting of the White House’s coronavirus task force to take a call from the president’s chief of staff, Mark Meadows.

Mr. Meadows was angry with Dr. Hahn, the head of the Food and Drug Administration, for pushing new guidelines for vaccine developers, according to two senior administration officials familiar with the call who requested anonymity because they were not authorized to discuss it. The F.D.A. wanted to require two months of follow-up data to make sure a vaccine was safe and effective, all but ensuring one would not be ready by Election Day as President Trump had promised.

Mr. Meadows told the commissioner the White House would not sign off on the guidance because it was unnecessary and would delay vaccine approval, so he should drop it, the officials said.

Dr. Hahn had been overruled by the White House before, most notably when the agency caved to the president’s desire to authorize the malaria drug hydroxychloroquine to treat Covid-19 despite a lack of evidence. This time, stung by embarrassing scientific misstatements he made at a news conference in late August and concerned about the imperiled scientific credibility of the agency, Dr. Hahn would not be as obedient.

Mr. Meadows, Jared Kushner, the president’s son-in-law and senior adviser, and the president himself have called Dr. Hahn directly to urge him to speed up emergency authorization of vaccines and treatments, according to the two senior administration officials.

But despite the White House refusal to approve the new vaccine guidance document, the F.D.A. published the guidelines in briefing materials to an advisory committee that will discuss them on Thursday, effectively making them official. And nearly two weeks after Mr. Trump called the antibody treatment he received when sick with Covid-19 a miraculous “cure” and said that he had authorized it, the F.D.A. has not yet approved it.

Internally, Dr. Hahn has tried to erect a shield between his staff and White House officials, asking that all calls be routed directly to him and not to his staff. His situation is especially fraught because Mr. Trump has openly accused the F.D.A. of engaging in political ploys to harm his re-election chances. Alex M. Azar II, the secretary of health and human services and Dr. Hahn’s direct superior, has also questioned Dr. Hahn’s motives in some conversations with the White House, according to multiple officials. 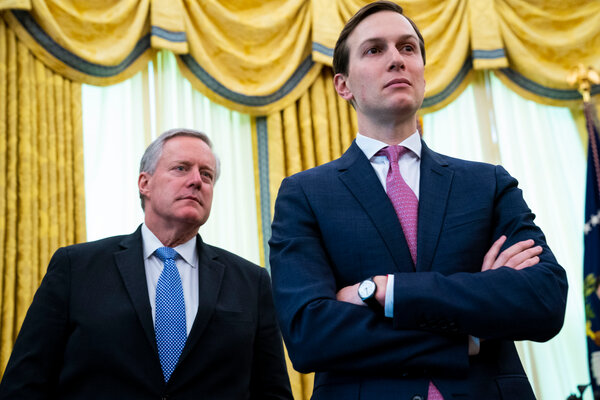 A senior administration official, who spoke on condition of anonymity, denied that Dr. Hahn and Mr. Meadows were deeply at odds over the vaccine guidance, saying “the two have a good relationship.” Mr. Meadows’s only concern was that changing the guidance in the middle of ongoing clinical trials could confuse vaccine makers, said the official, who noted that the White House eventually approved it.

Alyssa Farah, the White House communications director, said, “The White House has always encouraged the F.D.A. to follow the science and their expert medical viewpoints while also encouraging the F.D.A. to work around the clock to help advance therapeutics and ultimately a vaccine that will save American lives.” An F.D.A. spokesman also said that the White House and the Department of Health and Human Services “continue to support the science-based decisions of the agency’s career professionals.”

In what might be the final months of the Trump administration, and close enough to the election to make his firing unlikely, Dr. Hahn seems to be trying to save the F.D.A. from the fate of its sister agency, the Centers for Disease Control and Prevention, whose scientists have been stripped of much of their authority and independence in responding to the pandemic.

It has been a bleak year for the F.D.A. and morale is low, according to interviews with high- and midlevel employees over the past six months. F.D.A. scientists and policymakers have questioned whether Dr. Hahn could preserve their scientific integrity in the face of a president who openly calls them untrustworthy actors of the deep state.

Over the past few tumultuous months, Dr. Hahn has commiserated with Dr. Robert R. Redfield, the director of the C.D.C., who has also been widely criticized for failing to stand up to the White House. At a late September birthday party for Seema Verma, the Centers for Medicare and Medicaid Services administrator, Drs. Redfield and Hahn joked about quitting together to open a restaurant, according to several people who were there.

To many F.D.A. scientists, Dr. Hahn, an oncologist and former hospital administrator with no experience in Washington, has been a disappointing leader for much of his 10-month tenure. Under his leadership, the F.D.A. authorized hydroxychloroquine for hospitalized Covid-19 patients despite a lack of evidence, only to reverse the decision once the drug was tied to severe side effects.

In late August, on the eve of the Republican convention, Dr. Hahn made a significant error at a news conference with the president announcing the approval of plasma treatments for Covid-19. The commissioner greatly exaggerated the benefits of the treatment, angering the scientific community. He publicly corrected the record.

“I think that was really a wake-up call about the legacy of his leadership,” said Dr. Goodman, now a professor of medicine and infectious diseases at Georgetown University.

Indeed, the plasma debacle seems to have been a turning point for Dr. Hahn and agency scientists dismayed by the White House’s efforts to influence the F.D.A.’s actions. Within days, Dr. Hahn demoted the new F.D.A. spokeswoman, Emily Miller, who had arranged the White House appearance, and also ousted John E. (Wolf) Wagner, who had been installed by White House appointees to run the agency’s communications shop.

Soon after the plasma announcement, Dr. Hahn told top scientists at the F.D.A. that he would handle White House calls in an effort to create what he called a “cocoon” around the agency, according to multiple agency officials who asked not to be identified.

Many polls have shown a growing public distrust of the first coronavirus vaccines, and F.D.A. scientists worried that the perception of political meddling in the vetting process would jeopardize their widespread uptake.

On Sept. 10, eight high-level directors at the F.D.A. took the unusual step of writing a joint statement, published in USA Today, warning that real or perceived political interference could destroy the agency’s credibility with the public. Dr. Hahn tweeted his support of the statement, and later that day noted that new vaccine guidelines were coming.

Some regulators at the F.D.A. were worried about companies rushing early trial data to the agency before enough had been collected to make sound judgments about safety and efficacy. Pfizer’s chief executive, Dr. Albert Bourla, had repeatedly dangled the prospect of an early readout of Pfizer’s trial data by late October.

A growing number of pharmaceutical companies and medical groups were also privately appealing to F.D.A. regulators to give more clarity about what it would take to earn an emergency authorization. The criteria for such authorizations are vague, essentially just calling for potential benefits to outweigh the risks.

In early September, a small team of experts in the F.D.A.’s Office of Vaccines Research and Review drafted new guidelines, to make its standards unmistakable to drugmakers and reassure jittery Americans that the agency would not cut corners when assessing a vaccine’s safety and effectiveness, including after granting an emergency authorization.

Within days of submitting the guidelines to the White House, F.D.A. scientists began to fear they would never be made public — Mr. Trump attacked them himself in a news briefing — and began discussing how to get them out. They settled on an idea that would most likely draw less attention: including them in the briefing materials for an outside group of vaccine experts scheduled to meet on Oct. 22.

The maneuver was unusual: Briefing materials for outside advisory groups are typically posted just a few days ahead of the meeting. F.D.A. regulators had expected to provide the guidelines there well after they had been cleared by the White House. But as West Wing officials stalled, agency scientists began to discuss using the upcoming meeting to their advantage.

They slipped a condensed version of the guidelines into the appendix of the committee’s briefing materials, with reordered paragraphs and a new title, describing it as a summary of advice already given to companies. Dr. Peter Marks, the agency’s top regulator for vaccines, has called the recommendations “aspirational” in what some saw as a deliberate effort to downplay their importance to those officials who might obstruct them.

Privately, some White House officials argued that the pharmaceutical industry was not in favor of the guidelines. But in fact, executives from Johnson & Johnson and Merck, each with vaccine candidates, called for their release. The biotech industry’s trade organization wrote a public letter to the Department of Health and Human Services asking Mr. Azar to quickly publish the guidelines and make them available to the public, and on Oct. 6, Dr. Bourla, Pfizer’s top executive, wrote on Twitter that he had faith in the F.D.A.’s ability to set standards.

The same morning, the F.D.A.’s briefing materials were quietly posted online. The White House was given only about an hour’s notice, according to a senior administration official. Later that day, the White House surprised top F.D.A. officials and abruptly cleared the guidelines, which were then posted to the F.D.A. website.

Scientists at the Food and Drug Administration celebrated on video calls. It was a win for career civil servants — and for the pharmaceutical industry, which played an important part in helping the agency get the guidelines cleared, some experts said.

“We think of the coalition of careerists of Dr. Hahn’s that struck back, but there were also scientists in industry,” said Daniel Carpenter, a professor at Harvard University. “Very few people in industry are going to want to appear as if they were pushing for a product on the president’s timeline.”

The agency’s buoyant mood was quickly tempered with trepidation. New disputes continue to emerge: The F.D.A. and the health department have recently tangled, for instance, over whether it is possible to characterize an emergency use authorization for a vaccine as a form of provisional licensure so that Medicare would cover recipients.

The commissioner’s office has been rampant with rumors that Dr. Hahn will be fired, according to three senior administration officials. Although some consider it highly unlikely the president would risk the negative press from such a move, others aren’t so sure.

“The usual rules don’t apply to this administration,” said Coleen Klasmeier, a former F.D.A. lawyer who is now a partner at Sidley Austin. “My conclusion is nobody is particularly safe, even now.”