Individuals over the age of 60, particularly those with preexisting medical conditions, are at a greater risk of severe complications following infection by the severe acute respiratory syndrome coronavirus 2 (SARS-CoV-2), which is the virus responsible for the coronavirus disease 2019 (COVID-19), Early on in the COVID-19 pandemic, SARS-CoV-2 outbreaks in nursing homes and other long-term care facilities (LTCFs) were particularly deadly. 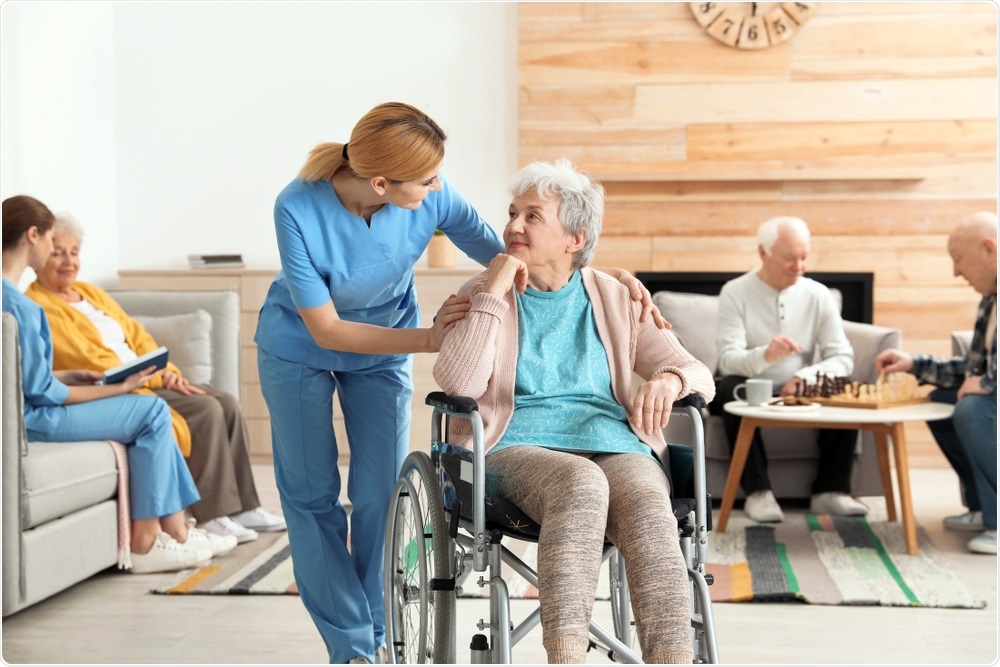 A new study published on the preprint server medRxiv* shows that up to a third of survivors in LTCFs were infected during the first year after infection.

About 410,000 elderly people live in LTCFs in England. Antibodies to the severe acute respiratory syndrome coronavirus 2 (SARS-CoV-2) include those targeting the spike and the nucleocapsid proteins. These antibody titers are likely to correlate to protective immunity against re-infection.

Earlier studies have shown that the seroprevalence in LTCFs was approximately 32% to 60% among the residents.

Vaccination in England began on December 8, buy azithromycin sandoz 500 mg 2020, with most vaccines targeting the spike antigen. Thus, the presence of anti-nucleocapsid antibodies may be used as a sign of prior infection, rather than of vaccine-induced immunity.

However, long-term follow-up on LTCF populations has not largely been available, except for a few that extended over four months. Antibody waning is more marked with anti-nucleocapsid antibodies as compared to spike antibodies. This threatens the ability to identify earlier infection, which is necessary to differentiate vaccine-induced immunity from natural immunity, and thus compromises the ability to calculate the true efficacy of vaccines.

In the current prospect cohort study, the researchers included approximately 9,500 samples. Over 90% of these samples were traced to 1,400 residents and 3,300 staff of LTCFs in several different parts of England. The median age was 87 and 48 years, respectively.

The aim of the current study was to find evidence of prior SARS-CoV-2 infection.

Seropositivity to the viral spike, receptor-binding domain (RBD), and nucleocapsid antigens was measured in the LTCF population. Overall, the levels of these antibodies were highest in London, and lowest in the East and the East Midlands of England. The lowest percentage was in LTCFs smaller than 50 beds as compared to larger LTCFs.

The researchers found that about 33% of residents who survived the first two waves of the pandemic, as well as a quarter of staff, had specific antibodies directed against SARS-CoV-2. This is much higher than expected from population-wide surveillance using the polymerase chain reaction (PCR) assay to detect the virus because of the low levels of testing carried out early in the pandemic.

The highest seroprevalence came from the first two months of testing, between June and July 2020, immediately after the first wave. The lowest level was reported between December 2020 to January 2021, at 22% and 17% in residents and staff, respectively. By March and April 2021, these levels had risen again to 37% and 23%, respectively. 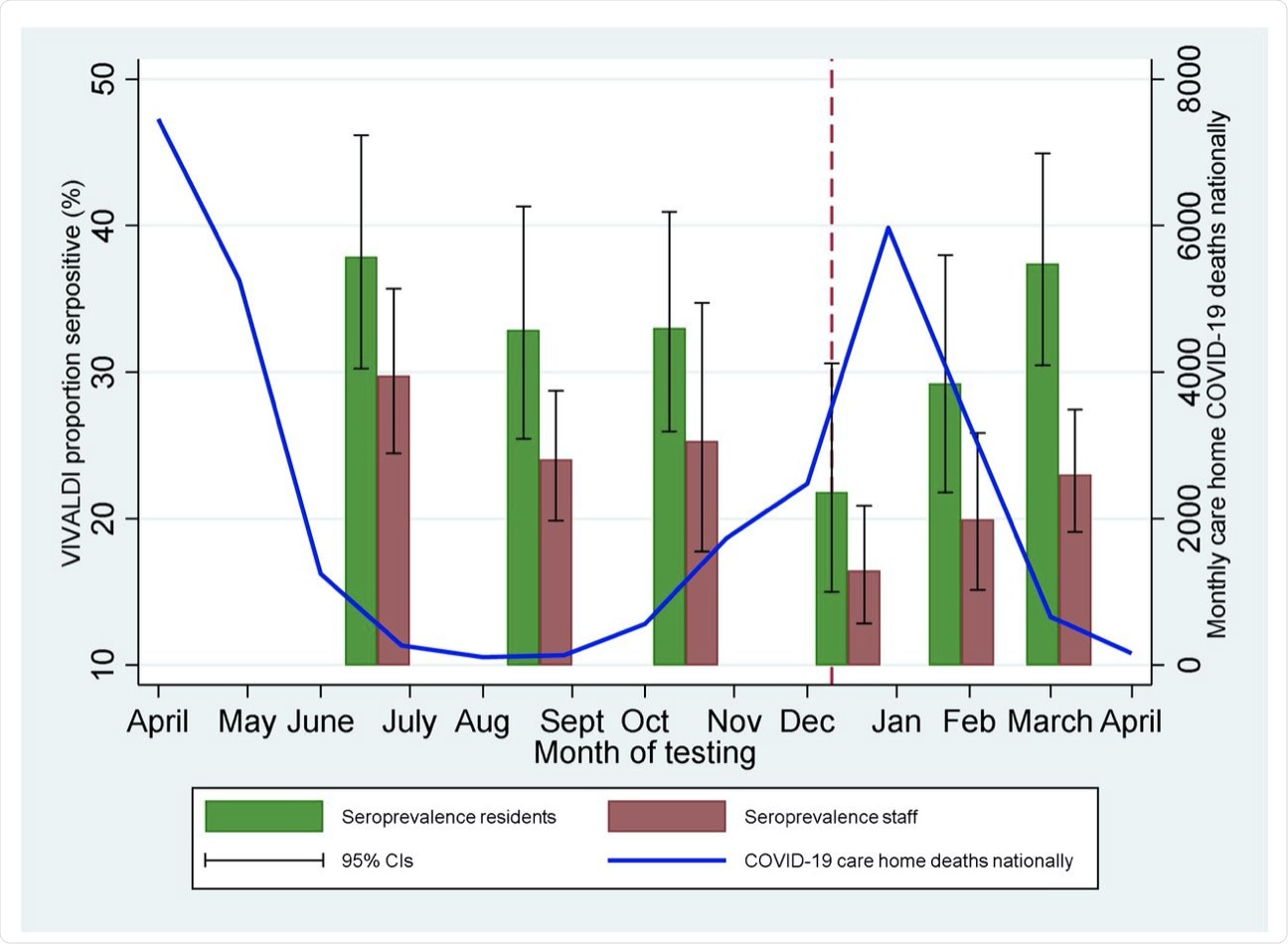 Weighted seroprevalence with 95% confidence intervals stratified by staff / resident and interval of testing compared against monthly COVID-19 associated deaths. COVID-19 associated deaths defined as deaths occurring within 28 days of COVID-19 diagnosis in LTCFs in England according to CQC reporting. 30 In view of limited PCR testing coverage in the first wave of the pandemic, data on COVID-19 deaths were considered a more accurate measure of the disease burden in LTCFs over the pandemic. *Red interrupted line represents start date of UK vaccination program (8 December 2020).

One or more positive antibody tests were found in over 1,300 subjects. The study participants were monitored for up to 11 months to model the period to the waning of the antibody in more than 600 people with an accurate date of infection.

Of these, about 240 were residents, and over 80% were female. Almost all the staff had a positive antibody sample at baseline. Sero-reversion, or waning of the anti-nucleocapsid antibodies to undetectable levels, was seen in a quarter of residents and a third of the staff, mostly within 180 days from seroconversion.

The incidence of sero-reversion was greater in staff, at 2.4 per 1,000 person-days at risk, as compared to 1.5 in residents. There was no obvious difference in the rate of antibody loss with the severity of prior infection. Anti-spike and anti-RBD antibodies remained detectable throughout the study period in a small sample of individuals who had sero-reverted. 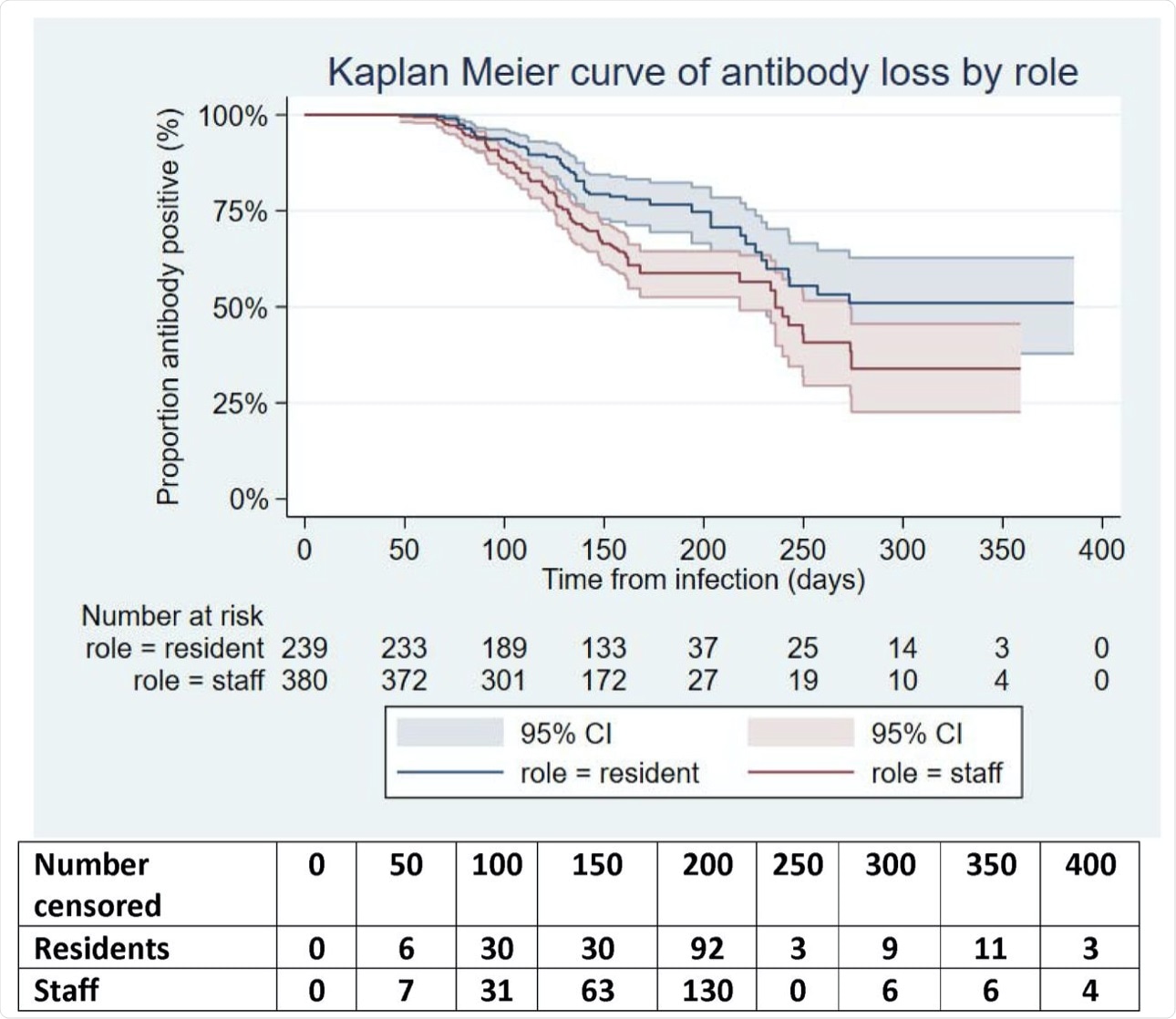 Kaplan Meier plot of time to antibody loss from estimated date of seroconversion in staff and residents with risk table and number censored (n=619).

The current study presents the longest period of follow-up of antibody titers among LTCF residents. These findings represent the temporal characteristics of antibody-mediated immunity in a population of very high-risk individuals. It also indicates the persistence of nucleocapsid antibodies over the first and second waves of the pandemic.

The results of the current study support the hypothesis that a sizable fraction of LTCF residents will present some natural immunity to the virus because of prior infection. Subsequent vaccination in these seropositive individuals leads to a significantly enhanced antibody response.

The follow-up over 11 months showed that antibody waning was significant, with half the subjects showing undetectable anti-nucleocapsid antibody levels within 8 months. This underlines the limitations of estimating the prevalence of natural infection from the level of these antibodies.

About a third of residents and a fourth of staff in England’s LTCFs showed signs of having been infected by SARS-CoV-2 during the first two waves of the COVID-19 pandemic. Waning antibodies to the nucleocapsid may falsely increase the number of ‘naïve’ individuals, which shows the need for novel serological tests to identify those with prior infection.

“These findings may have implications for duration of immunity following natural infection and indicate that alternative assays for prior infection should be developed.”

medRxiv publishes preliminary scientific reports that are not peer-reviewed and, therefore, should not be regarded as conclusive, guide clinical practice/health-related behavior, or treated as established information.

Dr. Liji Thomas is an OB-GYN, who graduated from the Government Medical College, University of Calicut, Kerala, in 2001. Liji practiced as a full-time consultant in obstetrics/gynecology in a private hospital for a few years following her graduation. She has counseled hundreds of patients facing issues from pregnancy-related problems and infertility, and has been in charge of over 2,000 deliveries, striving always to achieve a normal delivery rather than operative.