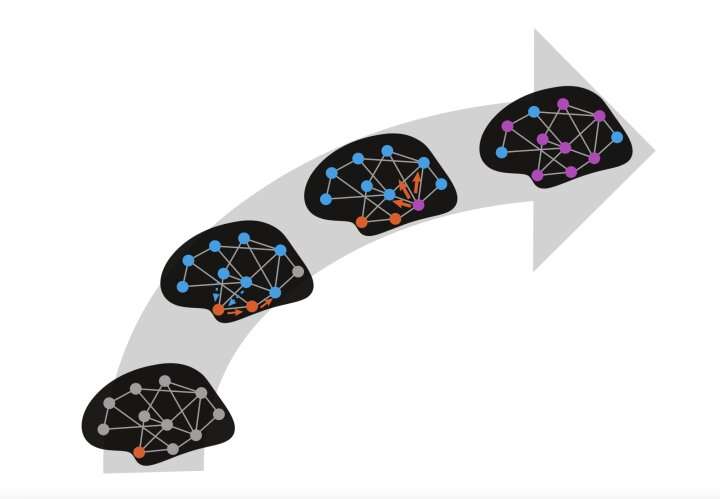 Researchers have known for many years that Alzheimer’s disease involves two proteins called amyloid beta and tau, and that interaction between them drives the spread of neurodegeneration. What hasn’t been clear is where and how those interactions occur over time as disease progresses. In a study published April 19 in the journal Neuron, neurologist William Seeley, MD, and his colleagues at UC San Francisco and in South Korea identified two key moments in the natural history of the disease.

The new findings may point to a window of opportunity for treatment with amyloid-lowering drugs like the controversial Adulhelm and similar medications currently in the pipeline. Seeley took some time to tell us about the importance of the recent discovery.

What do we know generally about the roles that amyloid beta and tau play in Alzheimer’s disease?

What we know from human neuropathological studies is that the tau tangles that cause so much trouble in Alzheimer’s disease are commonly observed, in small numbers, in the brains of adults by around age 40. This tau, universal albuterol reviews which accumulates initially in memory structures, exists in a dormant state. Without the presence of amyloid beta, the tau doesn’t spread widely throughout the brain.

If and when amyloid does start to appear, it first accumulates in the neocortex, the parts of the brain that handle cognitive functions like language and visuospatial skills. These regions are some distance from the memory structures where the tau is lying dormant. We know that these two proteins interact somehow, because the amyloid seems to draw out the tau and encourage its spread. A central mystery is how that interaction happens, because it occurs over such a long distance, and it’s arguably one of the most fundamental questions in the field.

What did you learn about this interaction that helps explain how Alzheimer’s unfolds?

We were able to identify two key interactions between amyloid beta and tau during the course of Alzheimer’s progression based on large, publicly available datasets, which include PET scans for detecting pathological amyloid beta and tau. Our goal was to determine how the normal architecture of brain connections might facilitate these interactions between tau and amyloid and influence tau spreading.

First, we looked at interactions between amyloid beta and tau across a distance. Based on what we know about connections between parts of the brain, we could model the pathways through which these interactions might occur. We found that the earliest of these remote interactions takes place in the entorhinal cortex, the area where tau first appears in the cerebral cortex.

Second, we looked at what happened when the two proteins got close enough to actually co-mingle within a brain region. This type of interaction occurs first in the inferior temporal gyrus, or ITG, which is an important area for conveying visual information to other parts of the brain.

The ITG appears to act like a big city train station, a transportation hub with dozens of tracks leaving it for other brain regions. Once the two proteins interact locally within this hub, the amyloid seems to catalyze an acceleration phase in which the tau leaves the station bound for other areas in the neocortex where amyloid is already accumulating.

Importantly, we were able to replicate all of these key findings in a second, independent dataset, drawn from older persons living in South Korea.

What does this information mean for the future of amyloid-lowering drugs?

Our findings may suggest that we need to prescribe amyloid-lowering drugs for people before the two proteins meet at the ITG train station. We hypothesize that if we wait until the trains have left the hub, it will be too late to influence the overall course of disease. This is the idea we hope to pursue in the next stage of our research.

This work may also help to explain why drugs like aducanumab (Aduhelm) have shown limited benefit in clinical trials. There’s no question that aducanumab and other experimental drugs in its class are lowering amyloid, but so far benefits have been modest and inconsistent. This could be because many patients enrolled in these trials are already past the stage in which tau is explosively propagating. The two key timepoints we identified could serve as a framework for deciding which patients are best for a given clinical trial. If we get better at selecting, we’ll get clearer readouts on efficacy.