Scotland’s top civil servant has denied that a government harassment policy was “designed to get” former first minister Alex Salmond.

Leslie Evans has been giving evidence to a parliamentary inquiry into the Scottish government’s handling of complaints against Mr Salmond.

She was asked if an incident at Edinburgh airport, involving the former first minister and investigated by Sky News, had helped “engineer” the policy.

MSP Alex Cole-Hamilton questioned Ms Evans: “Was this targeted policy engineered to fit any complaint…was it designed to get Alex Salmond?”

She responded: “No, absolutely not.”

“Concerns, not complaints” regarding Mr Salmond had been raised at the same time that a government harassment policy was being developed in November 2017.

The inquiry at Holyrood is examining how the Scottish government handled complaints made about Mr Salmond.

It centres on the internal investigation into two complaints from staff, which dated back to when he was in office as first minister of Scotland.

Mr Salmond successfully launched a judicial review against the government in January 2019.

He was awarded £500,000 in expenses by the Court of Session, which concluded the investigation had been “tainted with apparent bias”. 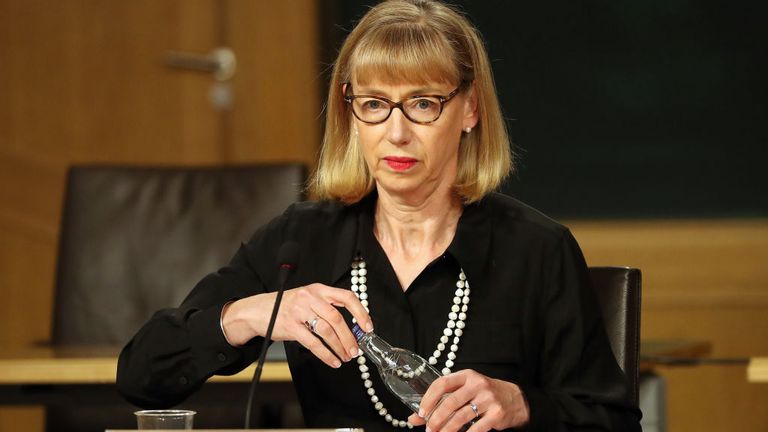 The inquiry into how it was handled was started but put on hold when criminal charges of sexual assault were brought against Mr Salmond.

He was acquitted on all counts in March, just before the coronavirus lockdown began.

Ms Evans, permanent secretary to the Scottish government, is the first witness to appear before the inquiry.

She said that the initial investigation into harassment complaints against Mr Salmond had been “the right thing to do”.

She said the government had acted in “good faith”, but apologised “unreservedly” for a “procedural failure”.

That failure relates to the fact that an investigating officer for the government had prior contact with two women making complaints before the inquiry began.

Ms Evans told the committee: “When complaints were raised it would have been unconscionable, and a failure in our duty of care, not to investigate those complaints.

“It was accepted at judicial review that one part of our procedure should have bee applied differently.”

She added: “We have already learned early lessons from this experience as part of work being led by our people directorate.”

Other witnesses due to be called to give evidence to the inquiry include First Minister Nicola Sturgeon, her husband Peter Murrell, who is SNP chief executive, and Mr Salmond himself.

Ms Sturgeon has already ordered an internal review of part of the government’s harassment procedure and triggered an independent review to decide whether she broke the ministerial code in her dealings with Mr Salmond.