WASHINGTON — The Biden administration moved on multiple fronts on Wednesday to fight back against the surging Delta variant, strongly recommending booster shots for most vaccinated American adults and using federal leverage to force nursing homes to vaccinate their staffs.

In remarks from the East Room of the White House, President Biden also directed his education secretary to “use all of his authority, and legal action, if appropriate,” to deter states from banning universal masking in classrooms. That move is destined to escalate a fight with some Republican governors who are blocking local school districts from requiring masks to protect against the virus.

The Biden administration said that it would take steps to protect educators from reprisals in states whose governors have banned mask requirements and that it would leverage federal funding to force nursing home staff to be vaccinated against the coronavirus.

Some politicians are trying to turn public safety measures, that is, children wearing masks in school and the political disputes, for their own political gain. Some are even trying to take power away from local educators by banning masks in school. They’re setting a dangerous tone. For example, last week at a school board meeting in Tennessee, protesters threatened doctors and nurses who are testifying, making the case for masking children in schools. Intimidation and threats we’re seeing across the country are wrong. Today, I’m announcing a new step. If you work in a nursing home and serve people on Medicare or Medicaid, you will also be required to get vaccinated. More than 130,000 residents in nursing homes have had, sadly, over the period of this virus, passed away. At the same time. vaccination rates among nursing home staff significantly trail the rest of the country. I’m using the power of the federal government as a pair of health care costs to ensure or reduce those risks to our most vulnerable seniors. The threat of the Delta virus remains real. But we are prepared, we have the tools, we can do this, so all those of you who are unvaccinated, please get vaccinated for yourself and for your loved ones, for your neighborhood, for your community. And to the rest of America, this is no time to let our guard down. 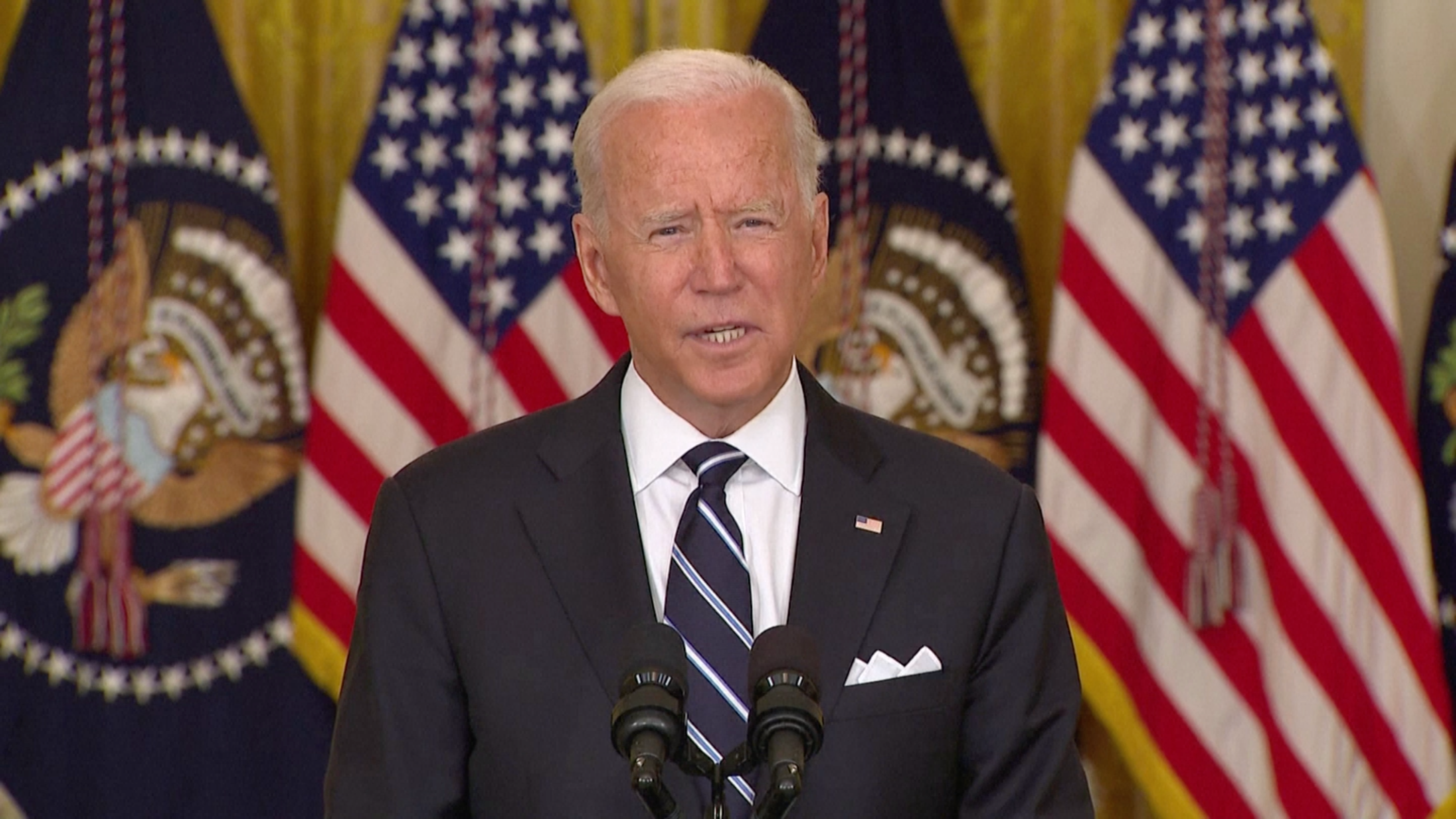 The shifts in strategy reflect the administration’s growing concern that the highly contagious Delta variant is erasing its hard-fought progress against the pandemic and thrusting the nation back to the more precarious point it was at earlier in the year.

Thus far, Mr. Biden has been reluctant to use the federal government’s power to withhold funding as a means of fighting the pandemic. But that changed Wednesday, when he said his administration would make employee vaccination a condition for nursing homes to receive Medicare and Medicaid funding. Officials said the decision would affect more than 15,000 nursing homes that employ 1.3 million workers.

“The threat of the Delta virus remains real, but we are prepared, we have the tools, we can do this,” Mr. Biden said in the East Room, adding, “This is no time to let our guard down.”

He accused politicians who were banning local school districts from requiring masks in the classroom of setting a “dangerous tone,” adding, “We’re not going to sit by as governors try to block and intimidate educators from protecting our children.” The administration is sending letters to eight states — Arizona, Florida, Iowa, Oklahoma, South Carolina, Tennessee, Texas and Utah — challenging their efforts to ban universal masking in schools.

For many Americans, the booster strategy will affect them the most. The government plans to offer third shots to adults who received the Pfizer-BioNTech or Moderna vaccines eight months after they received their second dose. About 150 million Americans have been fully immunized with one of those two vaccines.

“We are concerned that the current strong protection against severe infection, hospitalization and death could decrease in the months ahead, especially among those who are at higher risk” or who were inoculated in the early months of the vaccination campaign, Dr. Rochelle P. Walensky, the director of the Centers for Disease Control and Prevention, said.

Assuming that regulators decide third shots are safe and effective, the effort will start Sept. 20. Officials said they were waiting on more data to decide whether the 14 million Americans who received Johnson & Johnson’s single-dose vaccine should also receive an additional shot, but suggested that they would be included as well.

Although some public health experts have said booster shots were prudent and expected, not all scientists are convinced it is the right move. And advocates for global health said it was morally wrong — and shortsighted — for the administration to give booster shots to Americans when so many people around the world were still waiting to be vaccinated.

For state officials and health care providers, already exhausted from an 18-month battle against a novel virus that seems to shift its shape the moment it seems under control, the booster-vaccination campaign will bring a fresh round of logistical challenges. Some worried it could sidetrack efforts to vaccinate the roughly 85 million Americans who were eligible for shots but remained unvaccinated.

“We now have to fight a war on two fronts,” said Dr. José R. Romero, the Arkansas secretary of health. “We have to continue to press the vaccine into those groups that have not accepted it, and then have another effort to vaccinate those at high risk.”

The move to make employee vaccination a condition for nursing homes to receive Medicare and Medicaid funding reflects months of frustration with the comparatively low vaccination rates among nursing assistants and other workers who care for highly vulnerable people.

Officials described it as the first time that Mr. Biden had threatened to withhold federal funding in order to force vaccinations.

In an interview before the president spoke, Education Secretary Miguel A. Cardona described another major turning point: his department will use its civil rights enforcement arm to allow schools to require masks. The move comes as many educators and parents fear a surge in cases as the school year is about to start and as pediatric Covid cases climb.

The C.D.C. has recommended that everyone in schools wears masks, regardless of their vaccination status, but some states and localities are refusing to issue rules requiring masks or preventing schools from imposing them.

“At the end of the day,” he said, “we shouldn’t be having this conversation. What we’re dealing with now is negligence.”

Administration officials made clear that booster shots would depend upon a determination by the Food and Drug Administration that third shots are safe and effective — a ruling expected in the coming weeks. Whether those under the age of 18 will be eligible will also be up to the F.D.A. and a federal advisory committee of experts, they said.

Aside from some people with weakened immune systems who have already been authorized for third shots, officials advised that fully vaccinated people wait for what they promised would be a speedy but orderly national rollout of booster shots.

“Here’s what you need to know: If you are fully vaccinated, you still have a high degree of protection from the worst outcomes of Covid-19 — severe disease, hospitalization and death,” Dr. Vivek H. Murthy, the surgeon general, said at a White House briefing. “We are not recommending that you go out and get a booster today.”

Dr. Walensky presented a series of studies at the briefing that she said showed the vaccines’ efficacy wanes over time. Some doctors applauded the decision to offer booster shots.

“Given the prevalence we have of the Delta variant, doing everything we can to keep people out of the hospital — especially those at high risk — does make sense,” said Dr. Paul Biddinger, the director of the Center for Disaster Medicine at Massachusetts General Hospital.

But some scientists criticized the policy as overly broad, arguing that it is not clear that the general population needs a third shot.

Jennifer B. Nuzzo, an epidemiologist at Johns Hopkins University’s Bloomberg School of Public Health, said the studies cited by administration officials showed that the vaccines were doing what they were intended to do — protect against severe disease and hospitalization.

“I don’t think the metric of, ‘We’re seeing more infection’ is the right metric to be judging the efficacy of the vaccines,” she said. “The right metric is, ‘Does it prevent severe disease?’”

The administration’s move follows similar actions by Israel, Germany and France but goes against the recommendation of the World Health Organization, which is arguing extra vaccine supply should go to countries that have vaccinated far fewer of their residents.

“Vaccine injustice is a shame on all humanity and if we don’t tackle it together, we will prolong the acute stage of this pandemic for years when it could be over in a matter of months,” Dr. Tedros Adhanom Ghebreyesus, the organization’s director general, said at a news conference before the White House’s briefing.

Jeffrey D. Zients, the White House pandemic coordinator, said the administration was already donating 600 million doses of vaccines to needy countries and would continue that effort — a point Mr. Biden reiterated in the East Room.

“We can take care of America and help the world at the same time,” Mr. Biden said.

Administration experts said the booster policy was the result of dual, disturbing trends: a decline in the vaccines’ potency over time and the apparent ability of the Delta variant to somehow bypass their protection better than its predecessors.

Understand the State of Vaccine and Mask Mandates in the U.S.