Mr. Biden’s phone call appeared to be a pointed ultimatum to stop the hackers, who have attacked computer networks in the United States with relative impunity. 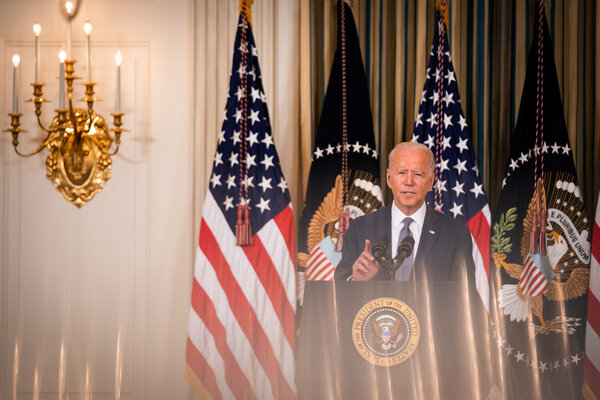 President Biden warned President Vladimir V. Putin of Russia on Friday that time was running out for him to rein in the ransomware groups striking the United States, telegraphing that this could be Mr. Putin’s final chance to take action on Russia’s harboring of cybercriminals before the United States moved to dismantle the threat.

In Mr. Biden’s starkest warning yet, he conveyed in a phone call to Mr. Putin that the attacks would no longer be treated only as criminal acts, but as national security threats — and thus may provoke a far more severe response, administration officials said. It is a rationale that has echoes of the legal justification used by the United States and other nations when they cross inside another country’s borders to rout terrorist groups or drug cartels.

“I made it very clear to him that the United States expects, when a ransomware operation is coming from his soil, even though it’s not sponsored by the state, we expect them to act if we give them enough information to act on who that is,” Mr. Biden told reporters.

Later, as he was leaving for Delaware for the weekend, Mr. Biden appeared to specify one of the ways the United States could respond. Asked if it might attack the servers Russian cybercriminals have used to hijack American networks — meaning knock them offline — Mr. Biden responded, “Yes,” according to a pool report.

The heightened tension over the ransomware attacks highlights the complexity of a new type of conflict unfolding between the United States and Russia, one in which the well-established rules and understandings of the Cold War no longer apply. Administration officials say Mr. Biden is conscious of the need to avoid an escalating series of actions that could damage both nations, but also of maintaining his credibility after repeatedly warning Mr. Putin, so far without success.

The very nature of the attacks also makes responding and deterring them difficult. While the ransomware criminals in this case may be operating from Russian territory as they devise their attacks and collect their ransoms in cryptocurrency transactions, the attacks themselves can be launched from computer servers anywhere around the world. And unlike U.S. military incursions into Afghanistan to rout terrorists, or joint drug enforcement actions in Colombia or Mexico to dismantle drug cartels, the United States is not protected from retaliation by oceans or missile defenses when it comes to cyberattacks.

Mr. Biden is under increasing pressure to take action to stem the costly hacks that threaten critical American infrastructure. After weeks of generic warnings and diplomatic maneuvering, the phone call on Friday appeared to be a pointed ultimatum in advance of some kind of effort to dismantle the criminal enterprises that have threatened the flow of gasoline, the production of beef and now the networks that connect American businesses.