A political commentator has said the Government’s latest Brexit move could well be part of a wider plan, which is bound to anger Leave voters. Steve Hawkes, Director of Issues and Public Affairs at Burson Cohn & Wolfe, said discussions of a Kent border could be part of a wider plan to force the EU into signing a deal.

He wrote on Twitter: “I can’t help thinking the Internal Markets Bill, talk of a ‘border’ in Kent is all cover for the very Theresa May-like Brexit deal Boris will sign, say, at the end of October.”

Mr Johnson has given the EU a deadline of October 15 to agree on a post-Brexit trade deal, but the two sides are still at a stalemate over a number of key issues.

Tensions with the bloc also worsened following the Prime Ministers’ plan to override parts of the Withdrawal Agreement if a deal is not reached in time, as outlined in the Internal Markets Bill. 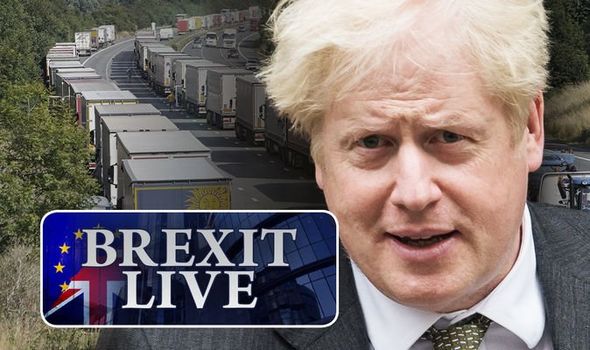 Yesterday Michael Gove, the minister responsible for no deal planning, has said truck drivers will need a permit to enter Kent after the Brexit transition period ends on December 31.

He said the permits could help avoid queues of up to 7,000 trucks seeking to cross the English Channel after the UK leaves the single market and customs union at the end of the year.

The minister suggested the Kent Access Permit (KAP) system would be enforced by police and ANPR cameras.

Drivers will need to apply for the permits online and show they have all the paperwork they need to ferry goods to Europe.