Business Secretary Kwasi Kwarteng said Eurocrats wanted to divert attention from other problems, such as the EU’s shambolic rollout of Covid jabs. While International Trade Secretary Liz Truss said Britain has not breached the border protocol, which keeps the region in the bloc’s single market, EU chiefs claimed it has – and have threatened legal action.

The leader of the Democratic Unionist Party added: “What they’re only interested in is protecting their bloc. They’re not interested, as they claim to be, in protecting the Belfast agreement.”

The backlash came as Brussels vowed to launch legal action “very soon” after the UK said that it will delay implementation of part of the protocol.

Maros Sefcovic, the European Commission vice-president, said that was a “very negative surprise”.

Cabinet Office Minister Lord Frost said the UK was extending “grace periods”, which are designed to ease trade between Northern Ireland and Great Britain while permanent deals are agreed. 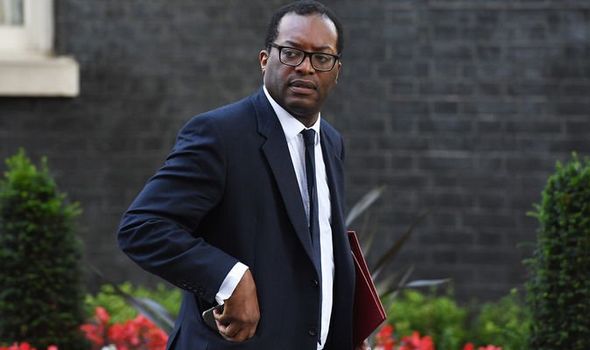 The EU has accused Britain of going back on obligations in the Brexit Withdrawal meant to ensure no return of a hard border between Northern Ireland and the Republic.

Mr Sefcovic said that the Commission was working on “infringement proceedings”.

But Mr Kwarteng accused the EU of being “appallingly aggressive” and blamed the bloc’s jabs failure: “I think 40 per cent of adults in the UK have been vaccinated, whereas that figure in France is about seven per cent.”

Meanwhile, the White House has re-emphasised President Joe Biden backs the Good Friday Agreement, which the protocol is intended to protect.