A tentative move to establish plans to rein in the UK’s more combative approach to the EU since Lord Frost was put in charge of our future relations with the bloc. Brussels is already preparing to sue the UK over its move to unilaterally extend grace periods on EU red tape for Northern Ireland. But EU officials and diplomats have suggested they could also adopt tougher stances on granting the City of London easier access to the bloc’s financial services markets and the Lugano Convention, an international law pact.

“We had hoped to maintain a trustful partnership,” a senior EU diplomat told the FT.

“Now it looks like it is going to be a tough and rough relationship for the foreseeable future.”

Insiders have hinted they don’t expect Britain to drop its belligerent approach to the EU as long as Boris Johnson remains in charge of Government.

Since the the Trade and Cooperation Agreement entered into force in January, both sides have become embroiled in a number of cross-Channel rifts. 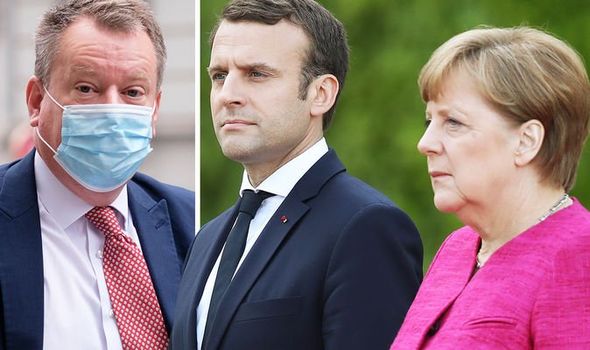 Rows have broken out over Downing Street’s refusal to grant EU envoys in London full diplomatic status, alleged discrimination between EU countries on fees for UK work visa and the post-Brexit arrangements for Northern Ireland.

There has also been a major spat between No10 and Brussels after the bloc’s most senior officials wrongly accused Britain of banning the export of life-saving coronavirus vaccines.

Much of the blame for the fractious relationship has been pinned on newly-appointed Brexit minister Lord Frost.

Joao Vale de Almeida, the EU’s ambassador in London, said: “This is a special relationship.

“We need to make an effort to change the mindset and give up on trying to score points on disputes in the past.”

The senior diplomat added: “Governments are really fed up with the constant provocations. The personality of David Frost certainly doesn’t help.

“If this continues, there will be a response.”

Brussels has held off granting City of London bankers so-called equivalence to allow them easier access to clients across the bloc’s markets.

Restricting Britain as an international finance hub is seen as one potential lever for convincing Lord Frost and Mr Johnson to back down from their hardline approach to the EU.

Another option could be to reject Britain’s application to become an independent member of the Lugano Convention.

The cross-border legal treaty helps determine what country’s courts have jurisdiction over civil and commercial disputes.

The accord is signed by the European Union, Iceland, Switzerland, Norway and Denmark, and also allows for judgements to be enforced abroad.

Brussels insiders feel they need to keep these options open to use as leverage in future disputes because suing Britain at the European Court of Justice is a too lengthy process.

An EU diplomat said: “If the UK is not willing to make this relationship work and is seeking to stretch the fabric as much as possible, we might need to resort to other options.

“Hope is fading that the relationship is going to be very successful in short to medium term… the question is how do we prepare ourselves for that.”

The insider stressed that no formal proposals are currently on the table.

Colorado employers reported adding 17,700 nonfarm payroll jobs from September to October, continuing a three-month streak of over-the-top hiring, according to a survey of business…