WASHINGTON — They came from far and near on a bright, warm, early autumn day, the powerful and the powerless, filled with appreciation and anxiety, to pay tribute to the daughter of a Brooklyn bookkeeper who changed the law of the land so that future generations would not have to face the obstacles that she overcame.

Justice Ruth Bader Ginsburg, the young scholar spurned by every law firm in New York because of her gender before going on to become a champion of women’s rights and a liberal icon, was honored on Wednesday by a former president, by her colleagues on the Supreme Court and by long lines of everyday Americans who felt the influence of her long and storied career.

“Justice Ginsburg’s life was one of the many versions of the American dream,” Chief Justice John G. Roberts Jr. said during a ceremony inside the court where she served for 27 years before her death on Friday. “Her father was an immigrant from Odessa. Her mother was born four months after her family arrived from Poland. Her mother later worked as a bookkeeper in Brooklyn. Ruth used to ask, ‘What is the difference between a bookkeeper in Brooklyn and a Supreme Court justice?’ Her answer: ‘One generation.’”

For a justice who came to enjoy her improbable late-in-life celebrity, it was a modest, unassuming farewell, but one that moved many in a country polarized by politics and suffering from a horrible pandemic. Among those who waited hours to pass below her flag-draped coffin outside the court building were many women, often with daughters or mothers, who saw in Justice Ginsburg a source of personal liberation.

“It’s not only for ourselves, but for my mother’s generation,” said Lara Gambony, 52, who drove with her friend Kathleen Dungan, 57, from Grayslake, Ill., to be at the Supreme Court. “She forced the courts to see us as human and that we had brains and we deserve our full rights.”

But amid the mourning, there was no cease-fire in the partisan war that has erupted over her seat. While she told her granddaughter that her dying wish was to not be replaced until the next president was chosen, President Trump and his Republican allies pressed ahead to install a new justice by Election Day.

Mr. Trump, who said he planned to pay his respects to Justice Ginsburg on Thursday, made clear that he had a personal stake in rushing the confirmation process. He said it was because he expected the outcome of the election to be decided by the Supreme Court and he wanted to ensure that another justice would be there to support him in any legal disputes about the vote count. 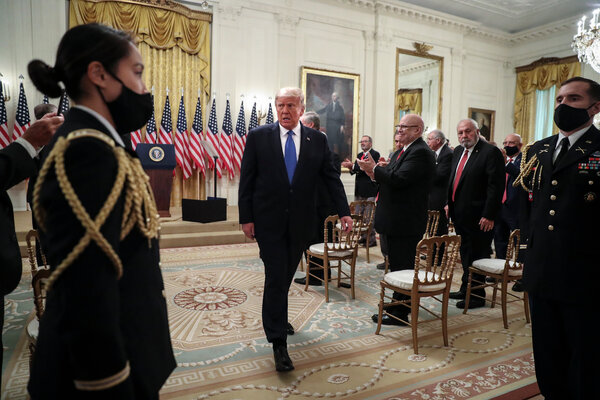 “I think this will end up in the Supreme Court,” Mr. Trump told reporters at the White House. “And I think it’s very important that we have nine justices.”

Five of the eight current members of the court were appointed by Republican presidents, but Mr. Trump appeared concerned that one of them, Chief Justice Roberts, might side with the three remaining liberals, as he has on occasion, leaving a 4-to-4 deadlock.

“And I think having a 4-4 situation is not a good situation, if you get that,” the president said. “I don’t know that you’d get that. I think it should be 8-nothing or 9-nothing. But just in case it would be more political than it should be, I think it’s very important to have a ninth justice.”

The unabashed expression of self-interest came as Senate leaders in the Capitol just across the street spent much of the day lobbing charges of hypocrisy at each other, each side dredging up its selective history of outrages by the other side to justify its current posture.

Senator Mitch McConnell, Republican of Kentucky and the majority leader, excoriated his Democratic counterpart, Senator Chuck Schumer of New York, for employing a parliamentary move to block committees from meeting more than two hours after the Senate convenes, which cut short a Senate Intelligence Committee briefing on election security. “We saw important Senate business hurt by what amounted to a temper tantrum,” Mr. McConnell said.

Mr. Schumer accused Republicans of “working with every fiber of their being to confirm a justice — despite Ruth Bader Ginsburg’s last wish, in contradiction to her dying, most fervent wish — who will reverse her legacy.”

The president plans to announce his nomination at 5 p.m. Saturday, and advisers expect him to select Judge Amy Coney Barrett of the United States Court of Appeals for the Seventh Circuit, a favorite of anti-abortion conservatives. The Senate Judiciary Committee may hold confirmation hearings as soon as Oct. 12, with a final confirmation vote the last week of October.

“Women will be able to be charged more than men for the same procedures again,” Mr. Biden said. “Pregnancy will be a pre-existing condition again.”

But he did not echo calls seeking aggressive pushback, like packing the court, if Republicans push Mr. Trump’s nominee through. “We should go to the American people, make the case why this is a gigantic mistake and abuse of power,” Mr. Biden said instead.

Justice Ginsburg, who died at 87 on Friday, made her final return to the Supreme Court on Wednesday morning as her coffin was borne into the majestic building by police officers past dozens of former clerks lining the stairs. She was taken into the Great Hall, where her family, former clerks and fellow justices waited, all wearing black face masks and positioned at a distance from one another in keeping with pandemic guidelines.

“Today, we stand in mourning of an American hero,” said Rabbi Lauren Holtzblatt from Adas Israel Congregation in Washington, whose husband, Ari Holtzblatt, clerked for Justice Ginsburg from 2014 to 2015. She eulogized Justice Ginsburg as “a path-marking role model to women and girls of all ages” who had left a lasting legacy for generations of women.

“To be born into a world that does not see you, that does not believe in your potential, that does not give you a path for opportunity or a clear path for education — and despite this, to be able to see beyond the world you are in, to imagine that something can be different — that is the job of a prophet,” Rabbi Holtzblatt said. “It’s the rare prophet who not only imagines a new world, but also makes that new world a reality in her lifetime.”

Chief Justice Roberts, the only other speaker, recalled that Justice Ginsburg aspired to be an opera singer but pursued the law only to find herself the subject of discrimination because of her sex at law school and in the working world.

“She was not an opera star, but she found her stage right behind me in our courtroom,” the chief justice said. “There, she won famous victories that helped move our nation closer to equal justice under law, to the extent that women are now a majority in law schools, not simply a handful. Later, she became a star on the bench.”

He said her 483 majority, concurring and dissenting opinions will “steer the court for decades” to come. “They are written with the unaffected grace of precision,” he said. “Her voice in court and in our conference room was soft, but when she spoke, people listened. Among the words that best describe Ruth: Tough, brave, a fighter, a winner. But also thoughtful, careful, compassionate, honest. When it came to opera: insightful, passionate. When it came to sports: clueless.”

The ceremony was over in just 18 minutes and then, in deference to the pandemic, Justice Ginsburg’s coffin was taken outside where she lay in repose on the portico for the rest of day. She will lie in repose again on Thursday and then lie in state at the United States Capitol on Friday, the first woman so honored, before a private interment next week at Arlington National Cemetery.

Among the parade of politicians at the Supreme Court on Wednesday were former President Bill Clinton, who appointed Justice Ginsburg to the court in 1993, and former Secretary of State Hillary Clinton, as well as Vice President Mike Pence, Senator Bernie Sanders, independent of Vermont, and Mr. Schumer. The two senators are alumni of James Madison High School in Brooklyn, the justice’s alma mater.

“Her 27 years on the court exceeded even my highest expectations when I appointed her,” Mr. Clinton said in a statement. “Her landmark opinions advancing gender equality, marriage equality, the rights of people with disabilities, the rights of immigrants, and so many more moved us closer to ‘a more perfect union.’”

Senator Susan Collins of Maine, one of only two Republicans to oppose the push to quickly confirm a replacement, crossed the street from the Capitol to mourn. “It was a very moving experience,” Ms. Collins said. “Although I obviously didn’t agree with all of her decisions, I admired her principled approach to every issue. This loss is personal as well as professional.”

Justice Ginsburg was that rare member of the court whose public profile transcended the normal obscurity of judges toiling in their chambers, venerated in recent years as a symbol of the women’s movement, cheekily called the Notorious R.B.G. and the subject of documentaries, books and a major motion picture.

Many of those who waited in line to pay respects did not know her but identified with her or felt she had helped change their lives.

“I was part of the military, but I was a single female, and being a single female I could not get a credit card,” recalled Teri Netter, 70, a retired Air Force lieutenant colonel who joined the service in 1968. “At the time that I came in, the highest rank that any woman in the military would hold was full colonel.”

Ms. Netter added, “She’s the reason that so much has changed.”

Carolyn Curry Tallman, 51, who wore a mask emblazoned with Justice Ginsburg’s face, and her friend Renee Bobbitt, 43, flew from their home in Merritt Island, Fla., to honor the justice. “I’ve had an almost 30-year career in Wall Street, and I don’t think I would have had six months without her,” Ms. Curry Tallman said. “I would never have gotten my foot in the door.”

Joe Biden keeps his distance from the potentially divisive concept of adding seats to the Supreme Court if Democrats retake the Senate. Read live updates.

Early voting for the presidential election starts in September in some states. Take a look at key dates where you live. If you’re voting by mail, it’s risky to procrastinate.

Keep Up With Our Coverage

Get an email recapping the day’s news