WILMINGTON, Del. — Lauren Witzke, a dabbler in QAnon, a self-proclaimed “flat earther” and the Republican Party’s nominee in Delaware for the Senate, was exhorting her supporters last month to “Go get ’em — America First,” as they squared off against a handful of Black Lives Matter protesters.

Gathered with her in the parking lot of the Republican Party headquarters here was a self-appointed security guard with a gun on his hip, a political adviser whose losing clients include candidates accused of racism and anti-Semitism, and a smattering of Proud Boys, the far-right brawlers whom President Trump told to “stand back and stand by.”

Across the street, Keandra McDole, sister of a wheelchair-bound Black man who was killed in 2015 by the Delaware police, chanted “Lauren Witzke’s got to go,” above the din of revving car engines and calls of “Trump, Trump, Trump” and “K.K.K.” The “security” man pointed his handgun toward the protesters.

“This is ridiculous,” Tori Parker, a Republican Party consultant, said as she scanned the scene from the Black Lives Matter side. “It’s sad that voters feel like they only have a choice between democratic socialism and white supremacy.”

Ms. Witzke’s ascent in Joseph R. Biden Jr.’s home state may be the nadir of the Delaware Republican Party’s rapid swerve from patrician moderation to the far-right fringe. And its plunge from power to irrelevance is an object lesson for other states like Colorado, Oregon and California, where Republicans running statewide are facing a choice: Appeal to the vocal extreme or find some way to assemble a more centrist coalition that could actually elect them.

Ten years ago, Michael Castle, a former Republican governor, sitting House member and pro-business moderate, was supposed to be a shoo-in for the Senate seat that Mr. Biden gave up to become vice president. Then he was blindsided in the Republican primary by Christine O’Donnell, a Tea Party candidate with a sideline in witchcraft who was crushed in the general election by Chris Coons, a relatively unknown Democratic county executive, by a vote of 57 percent to 40 percent.

It’s been downhill since. 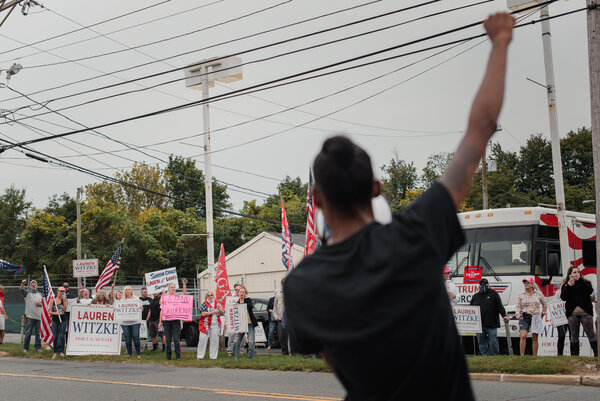 Anthony Delcollo, a Republican state senator from northern Delaware, insisted, “You see some polarization happening, of course, and people are passionate, but I think there’s also a case to be made for folks that are moderate.”

That was an easy case to make not long ago in tiny Delaware, population 974,000, where “the Delaware way” was a model of centrist political accommodation. But over the past decade, Wilmington has become more diverse, its suburbs have moved toward the Democrats the way many other suburbs have, and its rural voters have drifted toward the conspiracy-minded fringes.

Though Ms. Witzke has been photographed wearing a QAnon T-shirt and has used the movement’s hashtags on social media, she recently distanced herself from QAnon, the baseless conspiracy movement that falsely believes that Mr. Trump is secretly confronting a Satan-worshipping cabal of Democrats who run a global pedophile ring and drink the blood of children. The F.B.I. has warned that QAnon poses a potential domestic terrorism threat.

Ms. Witzke acknowledged in an interview that she was a heavy drug user until 2017, graduating from painkillers to heroin and methamphetamines. To support her addiction, she trafficked in drugs and stolen identification and was charged in 2017 with possession of heroin and methamphetamines, as well as resisting arrest, driving under the influence and introducing illegal drugs into a penal facility, according to a profile of her on delawareonline.com. She says all charges were dropped. She entered a faith-based inpatient treatment facility, emerging, she said, with deepened Christian beliefs and a devotion to Mr. Trump.

Despite all of that, or perhaps because of it, Ms. Witzke beat James DeMartino, 62, a Marine Corps veteran and corporate lawyer, in the Republican primary by double digits. She called him “a RINO loser,” meaning Republican in Name Only.

“People are so tired of George Bush-era politics. Nationalist populism is the future,” Ms. Witzke said. “America First is the future. And that is what I am.”

None of this will help her beat Mr. Coons in November. Democrats now hold every statewide office here, from governor to auditor.

The Delaware Republican Party’s conundrum is replicated across the country, where pro-Trump voters have elevated far-right candidates who might be able to win locally but cannot win statewide.

In Oregon, moderate Republicans were once a force, sending to the Senate Mark O. Hatfield, Gordon H. Smith and Bob Packwood. This year, the state’s liberal Democratic senator, Jeff Merkley, is squaring off against Jo Rae Perkins, a pro-Trump QAnon believer with an arrest record, a string of bankruptcies and unsuccessful campaigns for mayor, City Council, the House and Senate.

Delaware has its peculiarities. Rapidly urbanizing around the capital in the north and heavily agrarian in the south, the state is “Massachusetts bolted onto Oklahoma,” Mr. Copeland says.

“The Republican Party has to be open-minded about the people who live in this country and get back on some sort of track that makes sense to the average voter,” Mr. Castle, now retired from politics, said in an interview. “You can’t just have ideological beliefs that don’t appeal to a majority of people in a state — or the country.”

Instead, the state’s Republican leaders have lashed themselves to Ms. Witzke, and she, in turn, has lashed out. On Twitter she called Mr. Coons a “Christian-hating baby-killer,” adding, “I’m coming for your seat, Satanist.”

She said she did not know the man who brandished the gun at her rally on Sept. 24. “I denounce all forms of violence in every form,” she said in an interview attended by her adviser Noel Fritsch, a freelance strategist from North Carolina whose roster of losing candidates include Paul Nehlen, a “pro-white” anti-Semite who ran against the House speaker at the time, Paul D. Ryan, in Wisconsin, and Chris McDaniel, a racial provocateur who nearly beat Senator Thad Cochran in Mississippi.

Ms. Witzke’s message to moderates, she said: “It’s me or Antifa.”

On Wednesday, a day after Mr. Trump’s Proud Boys remarks during the first presidential debate, Ms. Witzke took to Twitter to create more headaches for her party. “The Proud Boys showed up to one of my rallies to provide free security for me when #BLM and ANTIFA were protesting my candidacy,” she wrote, neglecting to mention that the Proud Boys outnumbered the McDole family protesters at the event. “I am grateful to them for volunteering their time to keep myself and my supporters safe!”

That followed Facebook comments she posted hours after the death last month of Justice Ruth Bader Ginsburg. She said the justice’s “obsession with abortion overtly singled out blacks and minorities for extermination,” accompanying the post with a photograph of dancing Black children.

Mr. Delcollo, the state senator, said that post forced him to speak out.

“Someone willing to engage in such repugnant and reprehensible behavior should step aside so that an individual with the proper character and judgment may serve as a candidate in the November election,” he wrote on his campaign Facebook page, asking the Delaware Republican Party to revoke its support for her.

The party has stuck by its candidate. Jane Brady, the Delaware Republican Party chairwoman, said Ms. Witzke was “mainstream on most issues,” though she might go to the extreme to support those issues.

“She made a mistake,” Ms. Brady said. “I’m hopeful she won’t alienate anyone by making a similar mistake on another issue.”

Ms. Witzke did remove the photograph of Black children from her Facebook post, but she left her comments intact.

“We are sick and tired of pandering and people electing government officials who will cave to the mob,” she said at her rally.

Ms. Parker, the Republican consultant who attended that rally with Black Lives Matter protesters, is trying to organize a group to help blunt her party’s far-right trajectory. Her husband, also a Republican, was the person who reported the brandishing of a firearm to the police.

In the face-off between police brutality protesters and Witzke supporters, Ms. Parker was clear which side she was on and which party she remains affiliated with. Her sign read, “Eisenhower didn’t fight the Nazis so one could run for the U.S. Senate.”

With President Trump in the hospital for the third day, Joe Biden campaigns cautiously while the Trump campaign continues its usual message. Read the latest updates.

Many rules have changed during the pandemic, making it harder to figure out how to cast your ballot. This interactive guide can help you ensure your vote is counted.

Keep Up With Our Coverage

Get an email recapping the day’s news