Andrew Marr pointed to the “ridiculous” and “absurd” rules the EU has imposed on Britons in the wake of Brexit. This comes as the UK and European Union are locked in a dispute over trading relationships in Northern Ireland in a growing stand-off between the two sides. The BBC host told Maroš Šefčovič, the Vice-President of the European Commission, that the EU appeared to be punishing Britons in order to preserve its “sacred” single market. 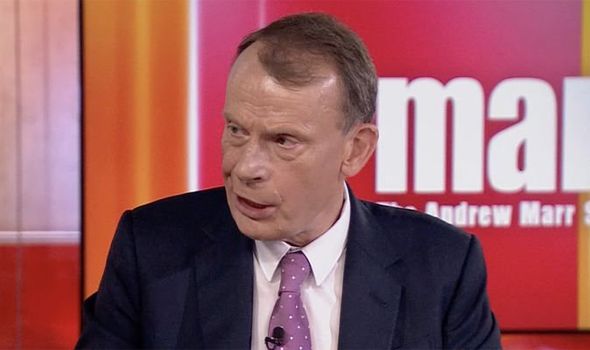 Mr Marr said: “One other small seeming but to many people ridiculous example of what is going on at the moment is if I have a guide dog, and I want to take it from Great Britain to Northern Ireland, it now needs a vaccination certificate against rabies.

“But the last time there was a domestic case of rabies in Britain was 1922. That’s absurd isn’t it?”

Mr Šefčovič responded: “This is exactly what I mentioned as an example of what we can definitely solve!”

He went on to urge Britain to sign up to a veterinary agreement that the EU had offered.

Britain has so far refused to sign up to this offer, amid concerns it could impact future trade deals with other countries.

Problems remain over the implementation of the Northern Ireland Protocol – a mechanism created to prevent a hard physical land border on the island of Ireland.