No 10 policy bosses have explored the use of powerful sonic weapons to force migrants to turn around in the English Channel, amid a growing row over how to handle the situation.

The Long-Range Acoustic Devices (LRAD) are already installed on two Border Force vessels but are used to issue voice commands. They were purchased by the Ministry of Defence for use as loud-speakers during the 2012 Olympic Games in London.

However, Downing Street policy experts called for them to be used as sound cannons which emit loud, high-frequency noise powerful enough to induce vomiting.

Currently used in the United States to disperse crowds and tested by the Greek government against migrants crossing the sea, their use is controversial. The request was turned down by the Home Office after senior figures suggested the plan would not work.

It comes amid a growing blame game over a failure to stop people from crossing the Channel in small boats, despite repeated policy announcements and pledges to get a grip.

The Navy is set to take central command of the issue after the Home Office won the backing of the prime minister for the plan.

A Home Office source said the involvement of the Navy would protect against strike action proposed by Border Force staff, angry over plans to turn back small boats in the Channel.

The French government has said such a plan would be illegal and it would not accept migrants being returned to its water in this way.

Sky News has been told that the prime minister vented his frustration at Home Secretary Priti Patel in a meeting at the end of last year after nearly 30 people died in one crossing in late November.

A senior Home Office source said Ms Patel had been pushing for military involvement for some time and had been repeatedly blocked despite crossings increasing. 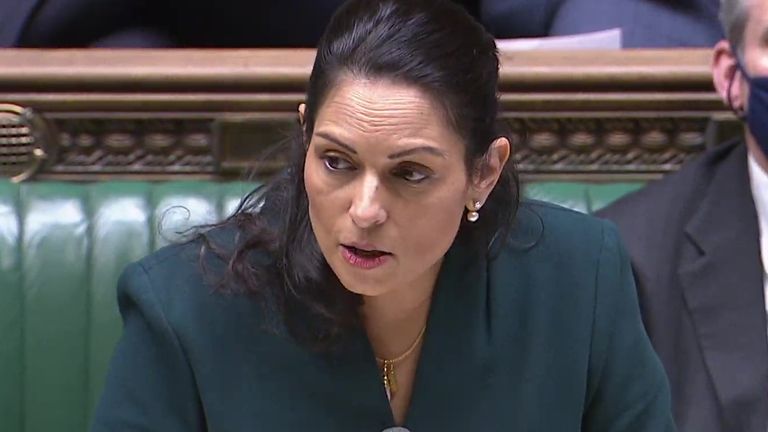 They added: “Everyone is frustrated with the situation but the only person coming up with workable ideas is Priti. Nobody else has come up with anything useful and if other departments had pulled their weight earlier we wouldn’t be in this situation now.”

Currently ‘no plans’ to use devices

A spokesperson for the department said there are currently “no plans” to use the sonic devices to deter migrants, but added: “As part of our ongoing operational response and to prevent further loss of life at sea, we continue to test a range of safe and legal options to stop small boats making this dangerous and unnecessary journey.”

A Ministry of Defence source said research had been conducted jointly with the Home Office into use of LRAD’s in the Channel but the plan had been rejected as it would not work.

LRAD devices are in use by the Ministry of Defence Police Marine Unit on the Clyde.

A Ministry of Defence spokesperson added: “Unacceptable numbers of people continue to make the dangerous Channel crossings and last November’s tragic deaths serve as the strongest reminder of the need to stop them.

“The government is exploring every avenue to prevent further crossings and details of how that can be achieved will be made known in due course.”

Other ideas to prevent crossings have previously been suggested and then later scrapped, including the use of nets – which was proposed by a Home Office official in October 2020.