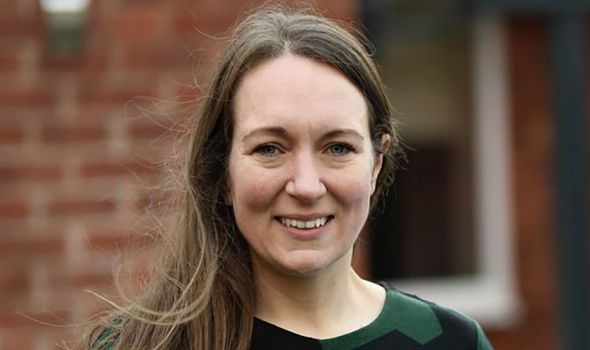 The Reform UK candidate in the crunch North Shropshire contest is unable to attend the all-important count as she has been struck down with Covid.

Instead, she will be watching the knife-edge result on TV with the Conservative Party and Lib Dems neck and neck in the polls.

Ms Walmsley is expected to secure around five per cent of the vote – snatching vital support from Conservative candidate Neil Shastri-Hurst.

Even a few hundred votes could tip the result in favour of the Lib Dems Helen Morgan who is now the bookmakers favourite.

But the mother-of-two, who became one of youngest county councillors in the country in 2003, is not concerned about seeing her former party lose.

An under-the-weather Ms Walmsley told the Daily Express: “I’m going to be watching the results come in on TV like most people as I have Covid.

“It’s bad timing but at least it only happened at the end of the campaign.”

She added: “People are hacked off at what’s been happening in Westminster. First there was the sleaze and now the Christmas party stuff has really hit a nerve.

“This is about sending a message to Boris Johnson, to the Government, that people are unhappy.”

Mrs Walmsley is from a family deeply involved in politics with her father, Keith Barrow, former leader of Shropshire Council and mother, Joyce Barrow, a current Conservative Shropshire councillor.

“There will be a few interesting conversations around the Christmas table this year,” she joked.

Defeat in the pro-Brexit constituency would be a fresh blow to Mr Johnson’s authority following a torrid few weeks that have seen the Prime Minister lurch from crisis to crisis.

North Shropshire is usually an ultra-safe Conservative seat, which was held by Owen Paterson in the 2019 election with a near-23,000 majority and has been Tory for all but two of the last 190 years.

The by-election was called when Mr Paterson resigned after Mr Johnson abandoned efforts to change the disciplinary system for MPs to save the former environment secretary from being punished for breaking rules on paid lobbying.

A key factor in the final result could be how many traditional Conservative voters who are now dissatisfied with the party and with Mr Johnson decide to stay at home on Thursday, or even vote Lib Dem.

Ms Walmsley added: “There are lots of floaty voters who could vote for the Lib Dems but the result could also depend on whether traditional Conservatives decide to vote or not.”

Fourteen candidates, including the Reclaim Party’s Martin Daubney, are standing in the by-election.