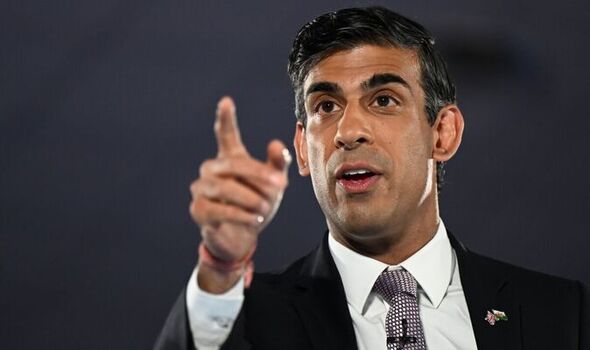 The US will aim to export at least nine billion cubic metres of liquefied natural gas (LGN) over the next year via UK terminals, more than doubling the level exported in 2021.

The Prime Minister said: “Together the UK and US will ensure the global price of energy and the security of our national supply can never again be manipulated by the whims of a failing regime.

“We have the natural resources, industry and innovative thinking we need to create a better, freer system and accelerate the clean energy transition.

“This partnership will bring down prices for British consumers and help end Europe’s dependence on Russian energy once and for all.”

No 10 said that under the new UK-US Energy Security and Affordability Partnership, the nations will work to reduce global dependence on Russian energy exports, stabilise energy markets and increase collaboration on energy efficiency, nuclear and renewables.

This deal follows a meeting between Mr Suank and President Joe Biden’s at the G20 Summit in Indonesia last month.

In a joint statement, the leaders said: “During this global energy crisis, brought on by Russia’s illegal invasion of Ukraine, it is more important than ever for allied countries to deepen their cooperation to ensure resilient international systems which reflect our shared values.

“Working with our allies, the United States and United Kingdom commit to intensify our collaboration to support international energy security, affordability, and sustainability, as Europe reduces its dependence on Russian energy.

“Our immediate shared goal to stabilise energy markets, reduce demand, and ensure short-term security of supply is underpinned by the longer-term objective of supporting a stable energy transition to achieving net zero emissions by 2050, which in itself will strengthen our energy security.”

In 2021, the UK imported 3.9 billion cubic metres of LNG from the United States.

The UK, which has much less gas storage than other European countries, relies on imported gas to meet around half of its demand.

Top provider Norway accounted for two-thirds of the UK’s imported supply last year, with LNG making up the bulk of the rest.

The National Grid has warned household lights could be switched off this winter, after Russia’s war in Ukraine slowed the flow of gas.

In the UK, imports from Russia made up four per cent of gas used last year.

The Government has pledged to phase out Moscow’s oil imports by the end of the year and gas imports as soon as possible.

The first meeting of the Joint Action Group, led by senior officials from the UK Government and the White House, will be held virtually tomorrow.