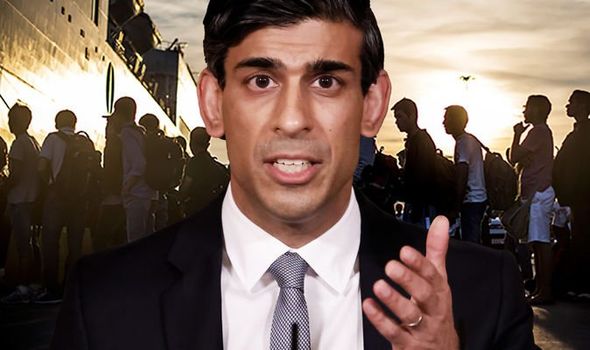 The Sunday Express can reveal that the Chancellor Rishi Sunak will announce the cash for the new boats known as “cutters” and new digital technology to help stem the flow of illegal migrants and boost Britain’s beleaguered travel industry.

Speaking to the Sunday Express, Mr Sunak said: “Protecting our borders and making it easier for us all to travel to and from our great nation is at the heart of our ambitions as a government.

“We’re investing billions of pounds to safeguard our shores, crackdown on crime and create a world-leading border.”

It follows a summer where thousands of illegal migrants have come over in small boats from France to the Kent coast.

This year’s numbers are expected to be a large increase on the number in 2020 when 8,500 are believed to have illegally made the crossing.

As part of the package, more than £628million will be invested in the UK’s Future Borders and Immigration System programme to modernise and digitalise the border.

This is aimed at improving waiting times, streamlining border entry and visa process and bolstering security.

This will include more than 1,000 Border Force officers to deliver customs and transit checks for goods and support our status as an independent trading nation.

Launching in 2023, new Electronic Travel Authorisations will allow people to visit the UK for reasons, such as tourism without requiring a visa, which will in turn make the UK more attractive as a tourist destination and be the best place in the world to start, grow and invest in a business.

They will also improve waiting times when crossing the border and enable the UK Border Force to focus its resources on areas such as enforcing customs rules and combating crime.

The digital by default system will mean we can now count who is coming in and out of the country and a US-style Electronic Travel Authorisation (ETA) will be introduced to make the border more secure.

ETAs will be fully in place by the end of 2025 and will enable the Government to decide at an earlier stage whether individuals should be allowed to travel to the UK.