WASHINGTON — Leaders in public life, and certainly in Washington, talk about ruling with iron fists and wielding levers of power while repeatedly ignoring the obvious: Fate will always be in charge.

Even the most bullheaded authorities will occasionally acknowledge this.

“Going well, I think!” President Trump tweeted late Friday. Of all the confusing, confounding and contradictory words that have been spun out of the White House in recent days, that two-word caveat — “I think” — was instantly seized upon by the president’s allies and adversaries alike.

“I think” was a slight but notable departure from pretty much everything we’ve come to expect from an embattled president who does not like to betray any uncertainty whatsoever. “Trump isn’t one for equivocation or understatement,” noted Politico’s Playbook, the widely read Beltway tipsheet.

As Mr. Trump remained hospitalized on Sunday after an expanding group of Senate Republicans and White House aides tested positive for the coronavirus, the situation offered yet another example of why politicians are advised to be humble, or act humble, if they can possibly stand it.

The absence of humility, Mr. Danforth said, can poison any chance for a collaborative culture.

He is hardly the first to suggest this. “Those who travel the high road of humility in Washington, D.C., are not bothered by heavy traffic,” said the former Senator Alan Simpson, Republican of Wyoming, in a 2018 eulogy for President George Bush. It is a familiar adage around the capital, if rarely heeded.

If Mr. Trump has a single superpower, it is his ability to project self-assurance at all times. He played the authoritative boss on television. He has mastered the talent of seeming to be in full command of his circumstances — even when he is plainly terrified or saying things that are untrue or that contradict an assertion that he made just a minute earlier.

And even when the president is tweeting news — as he did early Friday, when he announced that he and the first lady had tested positive — that would commence a weekend of pounding uncertainty across the country, dissembling from his staff members and doctors and news of other positive tests all around the president.

This weekend was, to use the clinical term, nuts. The president’s health status seemed to pinball from fine to scary. The White House’s story kept changing. No one had simple answers. When did the president first know he was sick? Who else was infected, awaiting results or quarantined? Was he really conducting the nation’s business from his hospital suite?

And why would Mr. Trump take a ride in the presidential S.U.V. so he could wave to supporters near the hospital? He did this on Sunday afternoon, which seemingly placed his Secret Service detail at risk of infection, as many pointed out. “The irresponsibility is astounding,” tweeted Dr. James P. Phillips, the chief of disaster medicine at George Washington University and an attending physician at Walter Reed. He noted that the risk of coronavirus transmission inside a hermetically sealed vehicle was about “as high as it gets outside of medical procedures.”

Judd Deere, a White House spokesman, maintained that “appropriate precautions were taken” during the president’s ride. “The movement was cleared by the medical team as safe to do,” Mr. Deere told a pool reporter.

“This only confirms that there’s just this tremendous distrust about whether our political leadership is up to this moment,” said Leon Panetta, the former secretary of defense under President Barack Obama and White House chief of staff under President Bill Clinton.

By definition, the nature of leading a diverse and complex nation is in large part a gamble, Mr. Panetta said. There is only so much even the most powerful chief executive in the world can control. “You can make up for some of that by telling the public what you think it wants to hear,” he said. But generally, the better bet is to acknowledge the limits of your authority and remind your constituents that no one person alone can fix it, he said. Be humble, in other words, or try to fake it.

That of course has never been Mr. Trump’s way. Self-doubt is for “losers.” Humility invites vulnerability. The approach has made him, depending on where you stand, an inspiring leader or an insufferable know-it-all and con man. It has made him immensely wealthy, or lent the impression of such.

In a sense, Mr. Trump has mastered the first feint of the powerful: No matter how much uncertainty swirls around you or doubt resides within, if you can sell yourself as being bulletproof, even against the potent ammunition of reason, then surely you must be.

This can get you extremely far in life, and leave no room for humility.

But the latter can come in handy. It can also help even the most powerful and self-assured bosses lead. “If a leader acts humble, they are open to learning,” said Michael Maccoby, a Washington psychoanalyst and anthropologist who has advised top executives across business and government. “They are open to different kinds of expertise. They’re going to want to listen to people like Dr. Fauci,” he said, referring to Dr. Anthony S. Fauci, the nation’s top official on infectious diseases. 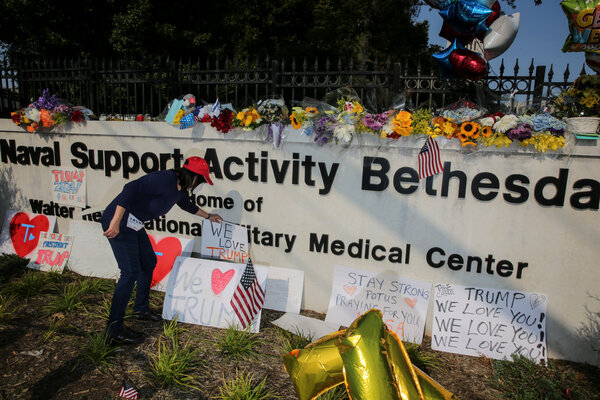 Still, Mr. Trump has clung to the narrative that it will all work out. The virus was “going away,” he was still saying last week, right up until Friday.

If nothing else, humility can spare even the most powerful politician a whole lot of grief and comeuppance later on.

“Trump has built what might seem to many people a ridiculous, completely fabricated image on a mountain of lies,” said Mark Salter, the longtime aide and speechwriter to Senator John McCain, and a fervent critic of Mr. Trump. “But that’s his story, and he’s sticking by it.” His millions of supporters have also been sticking by it, and by Mr. Trump, Mr. Salter said. “And now if he has serious symptoms, he won’t be able to pretend anymore.”

Pandemics can’t be governed, much less spun. They can trample upon so many best-laid plans and projections, upend an economy, a campaign, possibly a Supreme Court nomination. A pandemic can utterly shred even the most determined pose of defiance and denial.

There is something captivating about watching a reckless actor, love them or hate them. What will that person get away with? What price, if any, will they pay? Will their lack of humility become hubris?

“The Republicans put all their chips on red, red and red, knowing that eventually their luck would run out, and they would hit black,” said Bob Garfield, the host of WNYC’s “On the Media” and the author of “American Manifesto: Saving Democracy From Villains, Vandals and Ourselves.” Mr. Trump’s big bet, Mr. Garfield said, was that despite the polls, the science and a biblical set of circumstances arrayed against him, he could prevail.

“The president seems to have been racing along, hoping that the inevitable would never come for him,” Mr. Garfield said.

Ultimately, the prevailing lesson of recent days is as timeless and basic to Washington as it is elusive. The capital might contain the most powerful people in the world, but there is humility in remembering that their future and the nation’s rests elsewhere — with voters, laws and fate.