But if you don’t want to flip the channels between Biden and Trump, join our live chat, where we’ll cover both town halls. 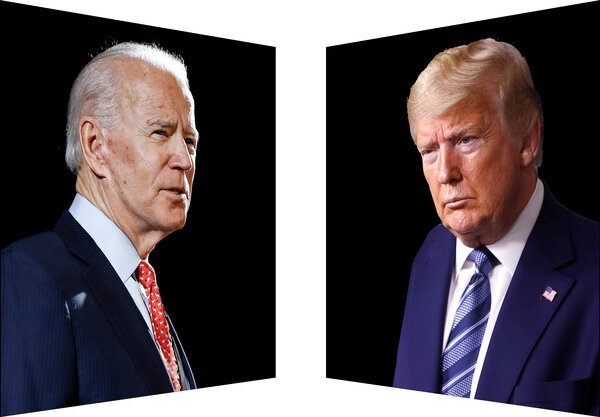 Tonight, Joe Biden and President Trump will take questions from voters in two town-hall-style events, on dueling television networks, at the same time. Mr. Biden will appear on ABC for about 90 minutes, while Mr. Trump will be speaking on NBC for an hour. Both events begin at 8 p.m. Eastern time.

Obviously, this is far from the second presidential debate we were promised. How did we get here?

Well, Mr. Trump contracted the coronavirus, prompting the debate commission to move the event to a virtual format. After the president refused to appear remotely, Mr. Biden booked a town hall on ABC for tonight instead. Then, Mr. Trump rustled up his own town hall on NBC.

NBC executives argued that they were locked into the time slot because they had to offer the president parity with Mr. Biden, who held a town hall with the network 10 days ago, also at 8 p.m.

Almost no one is happy with NBC about this — including journalists, liberal activists and the network’s own stars and producers. For his part, Mr. Trump trashed the network that’s hosting him as “the worst” during a rally today.

Having viewers toggle between two networks does not seem like the ideal setup for American voters or democracy. But, you know, #2020. We don’t get nice things. (Honestly, maybe that should just become the tagline of this newsletter.)

We’ll be analyzing and fact-checking all the action in our live chat, which is starting right now. (I’m hosting our valiant team of chatters as we cover two major campaign events simultaneously. Thoughts and prayers, please.)

Grab that remote and join us! I’ll see you tomorrow morning with a special town-hall edition of On Politics.

Thanks for reading. On Politics is your guide to the political news cycle, delivering clarity from the chaos.