A spokesman for the former Ukip leader said his new party Reform UK is planning to stand in the Holyrood elections, according to the National. It comes after Mr Farage applied to the Elecotral Commission to change the name of his Brexit Party to Reform UK to go up against Boris Johnson’s coronavirus plans.

Mr Farage said Prime Minister Boris Johnson had terrified the UK into submission over COVID-19 and squandered vast amounts of taxpayers’ money while holding out hopes of a “miraculous” vaccine as he announced plans to reform his political party.

He said: “What we’ve seen in this pandemic I think is a total failure of leadership at almost every level.

“What about the millions of people out there running their own businesses? This second lockdown is the death knell economically for many of those people.” 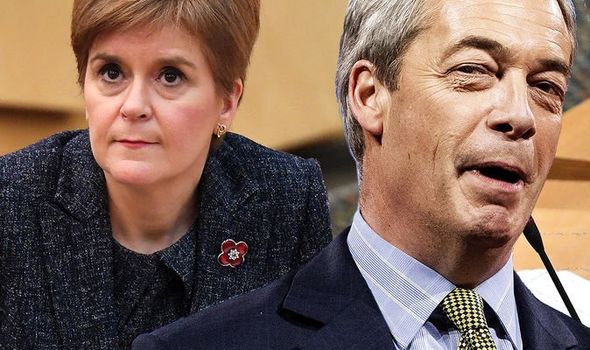 The Holyrood elections are scheduled to take place on May 6, 2021, with Ms Sturgeon’s SNP set for victory.

The Scottish First Minister has said she will use a election victory as a mandate to push for a second independence referendum.

Announcing his Reform UK party, Mr Farage and Brexit Party chairman Richard Tice said in a joint article in The Daily Telegraph: “The single most pressing issue is the government’s woeful response to coronavirus.

“Ministers have lost touch with a nation divided between the terrified and the furious. The debate over how to respond to COVID is becoming even more toxic than that over Brexit.”

Instead of a lockdown, Mr Farage, who as head of the Brexit party whipped up popular opposition to immigration, proposed targeting those most a risk, like the sick and the elderly, but said ordinary people should not be criminalised for trying to live normal lives such as meeting family for Christmas.

The Brexit Party contested 275 seats and took 2 percent of votes but did not succeed in electing an MP in the 2019 general election.

It will now broaden its agenda to include coronavirus and seek “reform” in other areas.

Party leader Nigel Farage said: “As promised, we continue to keep a very close eye on the Government’s trade negotiations with the EU, to ensure a proper Brexit.

“Further reform in many other areas is also vital for our nation’s future.”

Mr Tice added: “The need for major reform in the UK is clearer now than ever.

“A new approach is essential, so that government works for the people, not for itself. The most urgent issue is a new coronavirus strategy, so that we learn to live with it, not hide in fear of it.”

Mr Farage said in December that the party could become the “reform party” if the UK leaves the EU on January 31.

He revealed he had already registered the name as he added it would “have to campaign to change politics for good”.