LOS ANGELES — The jockeying began in the summer, right alongside the celebrations. Leading California Democrats were thrilled that Kamala Harris was named as the Democratic nominee for vice president and eager to help her and Joseph R. Biden get to the White House. That was not a question the sprawling and divided state political establishment disagreed on. But what to do about that empty Senate seat? That was far trickier.

Latinos make up roughly 40 percent of California, and remain a growing population in the state. White residents make up about 38 percent and Black residents account for nearly 6 percent of the state’s some 40 million residents. Until Ms. Harris won her Senate seat in 2016, the state had been represented by two white senators since 1983.

Some Latino officials point to those numbers and argue that the state’s governor, Gavin Newsom, needs to — must, without question — appoint a Latino to the U.S. Senate, the first in California’s history.

But Black political leaders contend that Ms. Harris could not be replaced by anyone other than a Black woman. Without her, they noted, the Senate would have no Black women in the chamber.

What Mr. Newsom’s decision, which is expected to come before the end of the year, comes down to is not about policy. Each candidate whose name has been floated on various lists agree on major issues. Instead, the choice makes clear the reality that even for advocates who genuinely believe in coalition building, to a large degree, the arguments are a zero sum game — if one group gets what it wants, it is impossible for the other group to get what it wants as well. And it has divided many leaders who are usually united.

“We have waited a long time to see representation match the size of our community,” said Thomas A. Saenz, the executive director of the Mexican American Legal Defense and Educational Fund, who has lobbied for a Latino pick. “We need to have representatives who reflect the population here. The fact is the African-American community is not growing in California and Latinos are an increasing part of the electorate.”

As the Democratic Party prepares to take over the White House once again, fights over representation are playing out over the presidential cabinet too, with Black, Latino and Asian members of Congress each lobbying the Biden-Harris transition for appointments. And the efforts threaten to open divisions among Democrats who have long relied on a multiracial alliance.

The debates are bringing to the surface long simmering tensions among groups that have historically struggled to obtain power at the highest echelons. In California, Mr. Newsom’s decision has the potential to make a triumphant moment of seeing Ms. Harris in the White House, into something more bittersweet for many Black women. 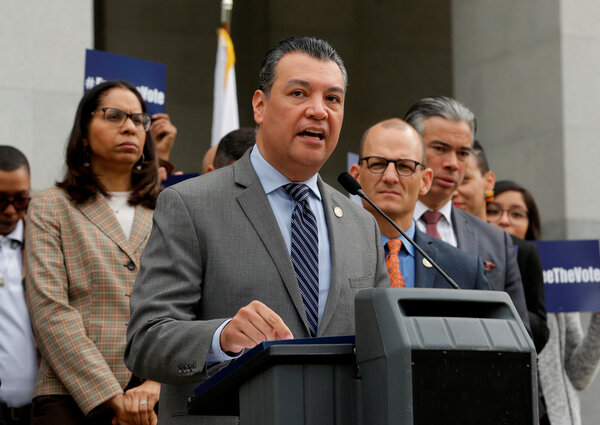 “The governor has to acknowledge that California has backed a Black woman and he has to meet this moment,” said Aimee Allison, the founder of She the People, which also helped lobby for Ms. Harris’s selection as vice president. “This is about recognizing that Black women writ large are essential as organizers and legislators. 2020 is not the time for him to turn his back on Black women.”

After Alex Padilla, California’s secretary of state, emerged as the leading candidate in recent weeks, activists including Ms. Allison grew increasingly frustrated. Dozens of local and national officials raised their voices and wrote a letter to the governor, urging him to appoint either Congresswoman Barbara Lee or Congresswoman Karen Bass to the seat.

“No constituency is more committed and more reliable to the Democratic Party than African-American women,” the letter read. “They deserve to have voting power and direct representation in the United States Senate.”

Gender dynamics are also an important consideration for Mr. Newsom, who has long tried to burnish his feminist credentials. For decades, California has elected two female senators, and women’s groups suggest that it would be unfair to have Ms. Harris’s seat handed to a man.

Another sign of the complexity of the moment for Democrats in California is that even as they are fighting one another for one senate seat, Black and Latino activists are jointly pushing for the resignation of Dianne Feinstein, citing her age and apparent comfort with some Republicans. (A New Yorker story published this month raised pointed questions about her mental acuity and short-term memory, and Ms. Feinstein later defended herself.) Ms. Feinstein has said she believes Mr. Padilla should be appointed to Ms. Harris’s seat, a position that has prompted some to suggest she should resign if she is so determined for Mr. Padilla to take office. Ms. Feinstein herself easily defeated Kevin de León, a former Democratic leader of the California State Senate, during her 2016 re-election campaign.

“Any say she thinks she has in this seat — no,” said Molly Watson, of the progressive group Courage California. “To have a man put in this position really is a slap in the face, nor does it represent what we had voted in this office.”

Ms. Allison echoed the calls for Ms. Feinstein’s resignation, saying that “it is her time to step aside and make some space for those who represent a big part of the state.”

In many ways, the explicit advocacy both in California and Washington is drawing lessons from the successful campaign to have Mr. Biden select a Black woman as his running mate. This summer, hundreds of women and organizations made an all-out effort, coordinating their efforts in daily phone calls and strategy sessions.

The effort of the Congressional Hispanic Caucus also reflects the increased number and power of Latinos in Congress. The caucus has met regularly with dozens of Latino organizations and sought to unify their message, zeroing in on candidates who they believe have a serious chance of being chosen for the cabinet.

The push for representation today, both nationally and in California, is more aggressive and direct than it has been in the past. It partly reflects that Democrats have not had this kind of power in more than a decade — and that demographics have changed considerably during that time.

“We have said that one of our goals is to see the face of America in the cabinet,” said Joaquin Castro, the chairman of the Congressional Hispanic Caucus, which has aggressively pushed for five Latino members of the cabinet, including at least one Latina woman. “Our population and our importance has grown. People don’t want to settle for less.”

After the Hispanic Caucus met with members of the transition team last week, civil rights leaders, including the Rev. Al Sharpton, met with Mr. Biden himself last week to ask for more inclusion of Black candidates in the cabinet.

“We’re moving toward the right direction, but we have not arrived there yet,” Mr. Sharpton said in an interview. Mr. Sharpton also joined the call for a Black woman to replace Ms. Harris as well, but said he was wary of pitting Black leaders against Latinos. “I am very concerned about that — we don’t want this to become ugly.”

“We are shocked because there is a great possibility for the first time in 20 years there could be no AAPI in the cabinet,” Ms. Chu said. “What is different this time is that we feel that our voice is not being heard.”

After extensive lobbying, Mr. Biden this past week appointed Congresswoman Deb Haaland to lead the Department of the Interior, the first time a Native American has been appointed to the cabinet.

In California, for the most part, political organizers and activists have avoided direct confrontation with Mr. Newsom.

But both sides have made it clear that they will not easily forgive Mr. Newsom if he ignores their entreaties.

“I am just really disappointed,” said Assemblywoman Shirley Weber, one of the leading supporters of Ms. Lee and Ms. Bass. “These numbers are so stark, and you can’t argue that we don’t need more Black women. I would have liked to expect more from my Latino colleagues.” And some Latino leaders in recent days have voiced their support for appointing a Black woman, including Dolores Huerta, a co-founder of the United Farm Workers.

This past week, Alberto Retana, the chief executive of Community Coalition, a South Los Angeles-based group that Ms. Bass started in the wake of the crack epidemic in the early 1990s, organized a petition that was delivered to Mr. Newsom on Friday.

“As Latinx community leaders, we must lead with our values, not with our demography,” the group wrote in the letter. “It is imperative to a multiracial democracy that we center this decision on advancing racial, gender and social justice. This will be accomplished by appointing a progressive Black woman.”