Clara Lamore figured that making the U.S. Olympic swimming team at 22 was good enough to cap anyone’s athletic career. So after she was eliminated early on at the 1948 Games in London, she threw in the towel, giving up competitive swimming entirely.

Thirty-two years later, in 1980, when she was 54 and had barely been in a pool again, a doctor prescribed swimming for her chronic back pain. She agreed to take it up regularly three days a week for a few months. Soon she was enjoying being back in the water and, on a lark, decided to enter an amateur meet.

In her first competition, she set a national record in the 50-yard breaststroke for her 50-54 age group.

By then married to a Navy officer and known as Clara Lamore Walker, she went on to set more amateur records than any other swimmer, male or female, in the world.

Mrs. Walker, who became a telephone operator and a cloistered nun for seven years during her three-decade dry spell, died on April 2 at a hospice facility in North Smithfield, R.I. She was 94.

Her death was confirmed by her great-niece Alyssa Kent. Ms. Kent said that with no children of her own, Mrs. Walker had given swimming lessons to her extended family, and that a few members of the generations that followed had even progressed to the Junior Olympics.

“She was a great role model,” Ms. Kent said.

For an athlete who assumed she had reached her personal best, even if it was short of a medal, Mrs. Walker roused herself to a remarkable comeback.

Competing in her respective age groups, she set 484 Masters National Records and 184 Masters World Records. She was the first Masters Swimmer (masters is an amateur category generally open to anyone over 18) to be inducted into the International Swimming Hall of Fame. She went undefeated for a decade and was named the Outstanding Masters Swimmer in her age group for eight years.

“Clara was an extraordinary woman and athlete who excelled at all she did,” John O’Neill, the Providence College swim coach, said in a statement. “She was one of the most focused and driven athletes I have ever worked with.” 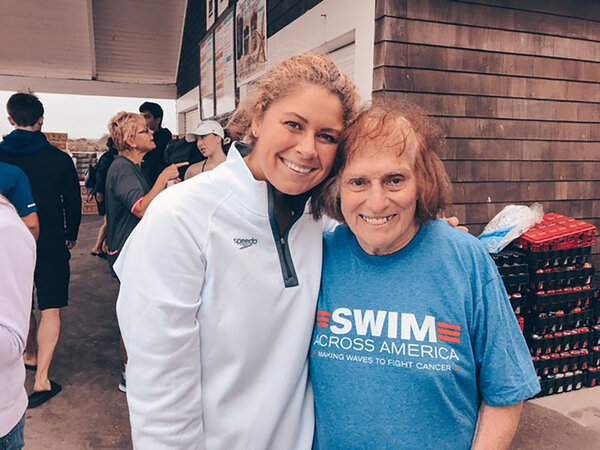 Clara Ann Lamore was born in Providence on July 2, 1926, to Raymond P. Lamore, a mailman, and Irene A. (Martellucci) Lamore, a homemaker. Her brother, Raymond, died in 2016.

Clara wanted to learn how to swim when she was 10, but there was no girls’ group with a pool in her neighborhood, so she audaciously joined the Olneyville Boys’ Club Swim Club.

In mid-1948, working in her uncles’ jewelry factory, she fulfilled every athlete’s dream: She was one of 17 women sailing on the SS America to represent the United States at the Summer Olympics, which were being revived in bomb-ravaged London, ending a 12-year hiatus that had begun before World II after the politically-charged 1936 Games in Berlin.

The 1948 Olympics were called the “Austerity Games,” because of lingering food shortages. Until just before the Games, the windows in the Empire Pool, next to what became Wembley Stadium, were still painted over from wartime blackouts.

Clara Lamore swam the 200-meter breaststroke in 3:23.6 (the gold medalist, Nel van Vliet of the Netherlands, won in 2:57.2) and was eliminated in the first round of the preliminary heats.

After 12 years of practice and growing promise, she gave up the sport and became an operator for New England Telephone. Later, she entered a convent run by the Religious Order of the Cenacle as a cloistered nun but left after seven years “due,” as she put it, “to a lack of decorum” on her part, which involved hiding candy bars in her habit that she had received surreptitiously from her brother.

In 1964, as one of the first two women to graduate from the Providence College School of Adult Education (now its College of Continuing Education), she earned a bachelor’s degree in philosophy and met and married Capt. Donald P. Walker. His naval service had them traveling the world together.

After he died in 1970, Mrs. Walker returned to Rhode Island and worked for the Cranston schools as an English teacher and a guidance counselor. She earned master’s degrees in counseling (in 1973) and school administration (1978) from Providence College.

After she retired, she continued as a residence hall director at Providence College and volunteered with Catholics for Life and as a eucharist minister at Rhode Island Hospital in Providence.

“To put it simply, Clara was my idol growing up,” Elizabeth Beisel, a Rhode Island swimmer who won silver and bronze medals at the London Olympics in 2012, said in a television interview. “She did everything for me as a young girl with an Olympic dream from Rhode Island. She is a trailblazing icon that will be remembered forever.”