SÃO PAULO, Brazil — In the cramped streets around Allianz Parque, hundreds of Palmeiras fans huddled together, craning their necks to try to catch a glimpse of whatever television screen they could find. The pandemic meant they could not go to the final in Rio de Janeiro. But it also meant they could not even go into the bars and restaurants, which are restricted to takeout service on weekends.

Instead, the fans improvised. A handful of them, residents of the apartment buildings and houses around the stadium, home to their beloved Palmeiras soccer team, angled their screens so they could be seen on the streets outside. Other fans crowded outside the bars and cafes, packed cheek by jowl, flags draped over their shoulders. 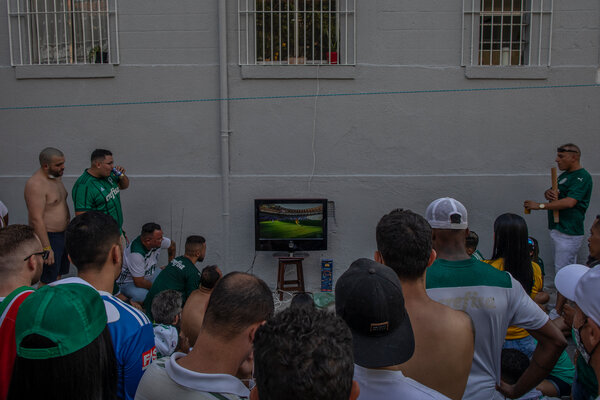 Their thoughts were 300 miles away, in the sweltering heat of Rio, inside the famed Maracanã, where their team was facing its rival Santos in the final of the Copa Libertadores, facing off for the greatest prize in South American club soccer.

In a normal world, of course, many of them would have been there instead, flooding in by the tens of thousands, by plane and by car and by road, just to be there, to festoon the spiritual home of Brazilian soccer in green and white. This was, after all, a historic moment: the first time since 2006 that the Libertadores final had been contested by two Brazilian teams, and the first time ever that it had been contested by two teams from the state of São Paulo.

The vast majority of them could not be there, of course, because this is not a normal world. Only 5,000 fans were allowed to attend the final in person — all of them specially selected by the respective clubs, rather than through a sale of tickets, and all of them, counterintuitively, packed into the few open sections of the 78,000-seat Maracanã rather than spreading out across its vast, largely empty bowl.

But even if the circumstances had been altered, the old instincts had not. Over the last 10 months, it has become clear that — no matter the risk or the restrictions — if soccer is played, for the moments that mean the most, then fans will feel an urge to be together.

And so the Palmeiras fans came to Allianz Parque on Saturday, to the place that feels like home, hours before the game started, to drink and sing and wave their flags. They had waited a long time for this — their team had not been crowned South America’s champion since 1999 — and they would have to wait some more, through 90 minutes of a game defined more by its caution than its quality, played by teams more conscious of what might be lost than what might be won.

Then, in a flurry, it happened. A melee on the sideline, and Santos’s veteran coach, Cuca, was sent off. The 90 minutes were up, the clock ticking deeper and deeper into injury time. After eight minutes, Rony, Palmeiras’s star forward, conjured a deep, searching cross. Breno Lopes, timing his jump, steered his header over the Santos goalkeeper.

He raced toward the fans, and they poured over the seats to get to him and his teammates. Palmeiras had its victory. And in the cramped streets around Allianz Parque, those who could not be there felt, at last, as if they were.