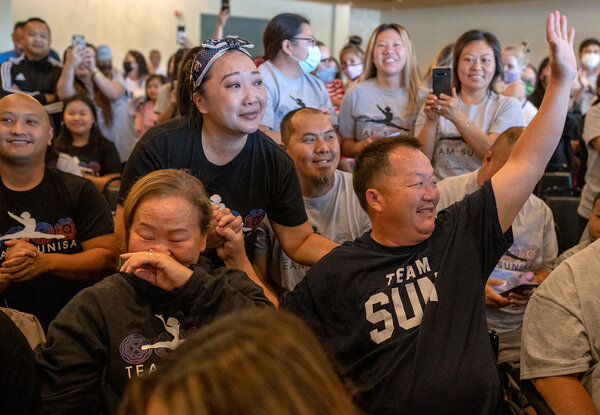 As Sunisa Lee won gold in the women’s all-around gymnastics final on Thursday, cheers erupted halfway around the world, where her family and friends — including her father in a Team Suni shirt — were celebrating her victory at a watch party in the St. Paul suburb of Oakdale, Minn.

That left athletes to compete in extraordinarily daunting and unusual circumstances: at largely empty venues, devoid of raucous fans and family members, the familiar faces who know more intimately than most all that it took to arrive at that moment.

“These are the people I do it all for,” Lee tweeted after the competition, sharing a video of her family’s watch party. “I LOVE YOU ALL!”

Athletes’ closest supporters have gotten creative and found ways to celebrate, holding watch parties that commence at dawn or go late into the night to follow events live.

And at least one athlete didn’t have to wait long to share her excitement. The U.S. swimmer Brooke Forde’s father, Pat Forde, is a writer at Sports Illustrated and is covering his ninth Olympics.