MELBOURNE, Australia — Filip Krajinovic was closing in on the fourth round when, in the fifth set of his match on Saturday against Daniil Medvedev at the Australian Open, he retreated as if zapped by an invisible electric fence.

Krajinovic had pushed the fourth-ranked Medvedev around the court at Rod Laver Arena while winning the third and fourth sets. But instead of his momentum carrying him into his first Grand Slam round of 16, Krajinovic won only 12 points in the decisive set as Medvedev prevailed 6-3, 6-3, 4-6, 3-6, 6-0.

Krajinovic hit the tennis equivalent of the Olympic marathoner’s 20-mile wall. His higher-ranked opponent shifted into a higher gear and a tight, tired Krajinovic lost his nerve.

“He was the guy who was going for his shots at the end,” Krajinovic said, referring to the fourth-ranked Medvedev, who has won 17 consecutive matches dating to the ATP finals last November in London.

For Krajinovic, a Serbian player ranked 33rd, a lot was riding on the outcome of his fourth third-round appearance in his 17th Grand Slam. From the third round to the fourth round is a huge leap in class, akin to moving up in a jumbo jet from the 32 seats in coach to the 16 in first class, with $245,920 — an $80,692 increase over third-round money — stuffed in the zipped goody packet on the seat.

At 28, Krajinovic is three years older than Medvedev, a Russian with nine ATP titles to Krajinovic’s zero.

“I feel I’m improving, and that’s the most important thing,” Krajinovic said, adding, “I need to go back to work. If I work and I’m focused, I deserve it. I’m sure that someone upstairs is watching.”

Medvedev had twice gotten as far as the third round in a Grand Slam before pushing through to the fourth on his third try. Against Krajinovic, he said, “for sure experience is a key.”

He added: “I stayed calm. Maybe that’s why in the fifth set he started to do just a little bit more mistakes, just playing a little bit slower.”

Medvedev likened the draw in the four majors to the steepest of all tennis ladders. “You need to make step by step,” said Medvedev, who added of Krajinovic, “I feel like if he will reproduce what he did today on the court, he can be in top 20 for years to come.”

The 22-year-old Norwegian Casper Ruud, like Krajinovic, was also playing in the third round of a Grand Slam for the fourth time. He’ll never forget his first time: It was at the 2019 French Open and he lost 6-3, 6-1, 7-6 (8) to Roger Federer, the men’s career Grand Slam titleholder who is now tied with Rafael Nadal at 20 majors each. “You kind of think more of the experience of being in the third round than thinking about actually winning the match,” Ruud said.

This time was different. Ruud, a former world No. 1 junior who has been ranked as high as No. 25, saw an opening against the 85th-ranked Radu Albot, who upset the No. 12 seed Roberto Bautista Agut in the first round.

“I’m happy to have broken the barrier,” said Ruud, who became the second Norwegian after his father, Christian, in 1997, to reach the round of 16 in this tournament. 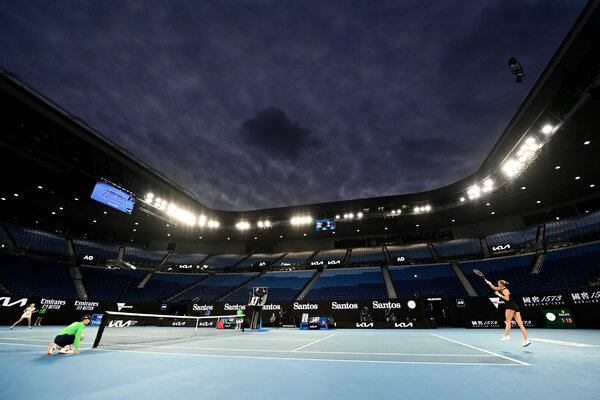 On the women’s side, three Americans advanced to the fourth round on Saturday. Jessica Pegula set the pace, beating Kristina Mladenovic in the first match at John Cain Arena. She passed the baton to Jennifer Brady, who beat Kaja Juvan in the second match on the same court.

Shelby Rogers, the 57th-ranked player from South Carolina, saw that her friends had advanced and, not wanting to be left behind, went out and beat the No. 21 seed Anett Kontaveit on the first night match at Rod Laver Arena.

“I think there is this little bit of aura around the second week of a slam,” said Rogers, 28, who has reached the quarterfinals at a Grand Slam twice, at the 2016 French Open and the 2020 United States Open. Her fourth-round opponent will be the world No. 1, Ashleigh Barty of Australia.

Pegula, 27, is the only one of the U.S. trio who is breaking new ground by reaching the fourth round in singles. She upset No. 13 Victoria Azarenka, a two-time Australian Open champion, in her opening match and has dropped 13 games in three matches. She said the groundwork for her victory on Saturday was laid in her straight-sets defeat to Petra Kvitova, a former world No. 2, in the third round of the U.S. Open last year.

“With women’s tennis, I think the depth is so good right now,” said Pegula, whose next opponent is the fifth-ranked Elina Svitolina. “Sometimes figuring out how to scrape by the first week is really important when you’re not playing well. I think the best players find ways to win on their worst days.”

Nadal, the world No. 2 who is bidding for a record 21st Grand Slam singles title, has found a way to scrape by during the first week with a balky back. His opponent on Saturday night was his British doppelgänger, Cameron Norrie, a lefthander who hits with a heavy topspin and defends well.

Norrie, 25, has never advanced past the third round and his breakthrough will have to wait. Nadal, 34, handed him a 7-5, 6-2, 7-5 defeat at Rod Laver Arena. Norrie described the match as a good experience and said he’ll take “a lot” of positives from it. “I left the court feeling like I want to get better,” Norrie said.

He added, “I did everything to try to make the second week. Rafa was too good.”