The Las Vegas Aces battled and bruised other teams en route to the top seed this W.N.B.A. season. A’ja Wilson dominated the block on both sides of the court, and Angel McCoughtry sliced through defenders with ease. Driving to the basket, getting to the foul line and pushing the pace were what made the Aces championship contenders.

Yet two games into the finals, the fire the Aces played with all season has waned under the efficient play of the Seattle Storm.

“If we’re in attack mode, I think that’s a great thing,” said Wilson, this season’s most valuable player. “That means we’re not shy, we’re not backing down. We’ll continue to do us, get to the free-throw line as much as we can.”

Now facing elimination in the best-of-five W.N.B.A. finals, the Aces will have to return to the physical game that got them there to keep their championship hopes alive. Game 3 is Tuesday night in the league’s so-called bubble in Bradenton, Fla. The Storm lead the series, 2-0.

During the regular season, Las Vegas’s physical play manifested in a league-leading 23.4 free-throw attempts per game. The Aces averaged 88.7 points per game and 19 of those points were from the free-throw line. In their 104-91 loss to Seattle on Sunday, the Aces shot only five free throws to Seattle’s 15.

“We attack the basket and get fouled, and get to the free-throw line,” Aces Coach Bill Laimbeer said Sunday. “Today we attacked the basket, got fouled and there were no calls. So, it is what it is.”

The lack of attempts from the line was a sore point for Laimbeer, but it didn’t tell the full story. The Aces reached the line 20 times in Game 1 and still lost by 13 points. Las Vegas tallied 15 turnovers on Sunday. The main point of emphasis for the Aces going into Game 3 will be fixing that.

“I think the biggest thing we need to adjust is taking care of the basketball,” Wilson said. “I think if we cut back on our turnovers, we’ll be right there.”

Wilson led the Aces with 20 points and added 7 rebounds in the loss on Sunday. McCoughtry and the newcomer Emma Cannon each recorded 17 points. The Aces will need both on Tuesday. 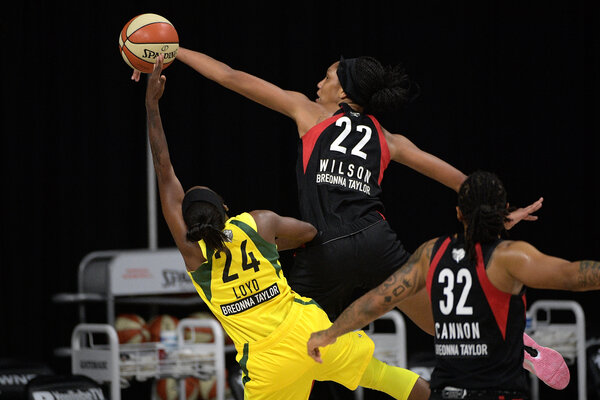 When the Aces faced elimination in Game 4 of the semifinals against the Connecticut Sun, McCoughtry scored 19 of her 29 points in the second half to help force a decisive Game 5. Now, as Wilson draws multiple defenders against the Storm, players like McCoughtry need to be ready on the perimeter to shoot or make the extra pass and get Seattle’s top-three-ranked defense moving.

McCoughtry set the record for most points in a finals game (38) in 2011 but knows all too well that is not enough to win a championship. In her fourth W.N.B.A finals appearance — her first with Las Vegas — McCoughtry is still without a ring. It will take more than Wilson and McCoughtry to avoid a three-game sweep.

Enter Cannon. She was signed in September after the Aces, who had entered the season without centers Liz Cambage and Ji-Su Park and needed depth. Cannon has played critical minutes for Las Vegas, now missing Dearica Hamby, who was named sixth woman of the year for the second consecutive season but injured her knee during the semifinals. At 6-foot-2, Cannon offers some size when Laimbeer subs her in for the 6-foot-6 starting center Carolyn Swords. With Swords in foul trouble on Sunday, Cannon made the most of her extended minutes.

“We knew that in the first two days we had her she’s not afraid to go out there and do her thing,” Laimbeer said of Cannon. “That’s what she did. She stays with herself, a physical player, and we saw some good post moves which are really needed.”

However, Laimbeer said he is not expecting Cannon to drop another 17 points on Tuesday. So where will the offense come from?

Las Vegas averaged a league low of 11.5 3-point attempts in the regular season. They have shooters like McCoughtry, Sugar Rodgers, and Kayla McBride who can get hot from the perimeter. Las Vegas may want to try to get shots from them from distance early in Game 3.

“I mean that’s who I am,” McBride said. “I know it doesn’t seem like that all the time, but that’s who I want to be on the court for this team: Be aggressive, take my shots, and just be myself.”

McBride shot 42.9 percent from 3 in the 2019 playoffs and has shot at a 36.7 percent clip for her career. If McBride can get some of her shots to fall early, the Storm’s defenders will have to decide if they’d rather keep attention on Wilson in the post or stop the hot hand from the perimeter.

Whether or not the Aces get better outside shooting in Game 3, they will need to return to their usual fearless and physical style to avoid elimination. Wilson described the team’s finals performance as “so-so.” For the Aces to extend the series and their season, they must leave no doubt as to what type of team they are. For McBride, that has to come with more aggressiveness and communication on defense.

“This league is too good, the players are too good, for us to have mistakes on the defensive end on assignments,” McBride said, adding, “Making it a team effort, you know, and always finishing with a rebound and not giving second opportunities has been a big thing for us.”

The Aces are most like themselves when they get out in transition, but through two games the Storm have stopped that. McBride believes the Aces will need to play with more grit if they hope to dictate the pace of the game on Tuesday.

“That’s been our M.O. all season long and we’ve gotten away from it,” she said. “Credit Seattle for making shots, being very efficient. But still, you know, we still got to be that tough-minded group on the defensive end. That’s who we were all season long. That’s what got us the No. 1 seed.”

The narrative about the series going into Tuesday is not in the Aces’ favor, but neither Wilson nor her teammates are paying attention.

“They’re not in our locker room. They’re not around us at all. And that’s on them that I can’t really change the narrative,” Wilson said.