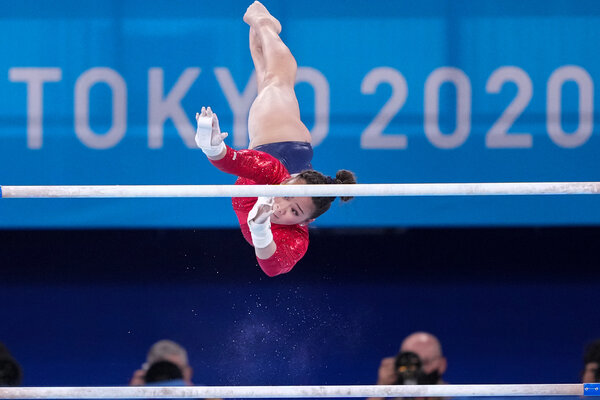 Simone Biles will not repeat as the Olympic all-around champion on Thursday after pulling herself from the event. The shake-up opens the door for her teammate Sunisa Lee, or Rebeca Andrade of Brazil, or the Russians, or the Chinese, to win the individual title, though Biles could still participate in the four apparatus finals next week.

The United States has won every Olympic all-around title since 2004. Brazil has never won an Olympic medal in women’s gymnastics.

How to watch in the United States

LIVE: The competition begins Thursday at 6:50 a.m. Eastern time and can be streamed live via the NBC Olympics site, Peacock or the NBC Sports app.

TAPE DELAY: Many fans will prefer to stream a replay or watch the tape-delayed broadcast, which will air on NBC at 8 p.m. Eastern time.

How the competition will work

The all-around will test 24 individual athletes on vault, uneven bars, balance beam and floor exercise. Each routine will receive one score for difficulty and another for execution; the athletes’ scores on each apparatus will be totaled to determine the most complete gymnast.

Lee will represent the United States along with Jade Carey, who earned a spot in the competition after Biles’s decision to step back. Lee is the second-best all-around gymnast in the United States, behind Biles, and is a strong contender for a medal.

Andrade of Brazil placed second in the qualification, earning a 15.4 after executing a near-perfect Cheng, a very difficult vault that only a handful of gymnasts can do.

Angelina Melnikova and Vladislava Urazova will represent Russia, which won the team event. Both women are stellar on the uneven bars, but fell on the beam in the team final.

China finished a disappointing seventh in the team event, so Tang Xijing and Lu Yufei will be looking for redemption. Tang finished second all-around to Biles at the 2019 world championship. Both women are capable of high scores on the bars and beam.