This article is part of our latest Design special report, about homes for multiple generations and new definitions of family.

Every year, millions of Americans load up recreational vehicles and hit the road, joining seasonal, nomadic communities that spring up in RV parks and campgrounds in some of the country’s most beautiful landscapes.

The stereotype is that RVs typically carry retirees, but the reality is that travel trailers have been attracting more people, and younger people, than ever, some drawn by an interest in tiny-home living, others pushed by the crisis of the pandemic.

According to the 2021 North American Camping Report from Kampgrounds of America, a network of privately owned campgrounds, RV use has grown steadily since 2014 and reached a record high of about 13 million households in 2020. RV ownership among 18- to 34-year-olds has also grown significantly, as reported by the 2021 Go RVing RV Owner Demographic Profile, and that age group now makes up about 22 percent of the market.

Some campers have taken matters into their own hands by gut-renovating RVs to give them the charm of a contemporary cabin while sharing design hacks online. Manufacturers have also responded with design-focused offerings, like Airstream’s recent collaboration with Pottery Barn on a special-edition trailer, and the stylishly retro creations of newer companies like Happier Camper.

But that still left room for the reinvention of the RV park experience — and architects, designers and entrepreneurs have been rushing to fill the void. 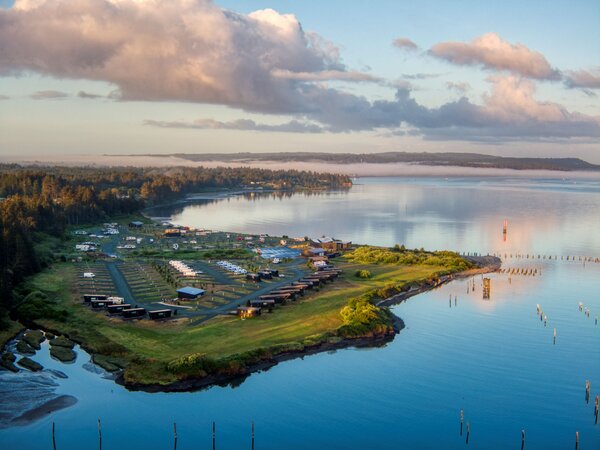 At Bay Point Landing, in Coos Bay, Ore., the architects at OfficeUntitled worked with JHL Design, an interiors firm, to create a seasonal community for NBP Capital centered on a clubhouse of angular volumes clad in blackened cedar shingles and equipped with low-slung, squishy furniture. The results have been featured in Wallpaper and Dwell.

“We joked that we wanted to create something that was like the Ace Hotel of RV parks — something very unique and a great experience,” said Christian Robert, a principal at OfficeUntitled. “What struck us was that there was a need for this kind of in-between space, where you could get away and experience nature, but also share it with others.”

Visitors can bring their own RVs, stay in one of the on-site Airstreams, or book one of the operation’s custom trailer-based cabins. Prices have recently ranged from about $70 a night for an RV site to more than $300 for a cabin. Guests can spend time by themselves or get together with other travelers in the clubhouse, which includes an indoor pool, a gym, an event space and a playroom, or venture out to other communal areas around the 103-acre property.

With the resort’s mix of natural beauty and of-the-moment design, “It’s the ultimate place to have an Instagram moment,” said Holly Freres, the principal of JHL. The target market, she added, includes “the 20-somethings who maybe don’t want to spend a lot, but have a high-design aesthetic and really want a space that’s simple but thoughtfully designed.”

AutoCamp caters to travelers who are eager to try RV living but perhaps don’t have a camper of their own. All accommodations are in the outfit’s own customized Airstream trailers, along with a few trailer-based cabins and luxury tents. The chain has two locations in California (in Yosemite National Park and on the Russian River) and opened one on Cape Cod in the spring. Sites are planned for the Catskill Mountains in New York; Joshua Tree, Calif.; and Zion National Park in Utah.

Each location has a different midcentury-modern-inspired clubhouse constructed from chicly rustic materials like black and blond woods, textured natural stone and blackened steel. There is always a central circular fireplace.

“The mission is to really connect people to the outdoors, and connect people to each other,” said Will Spurzem, AutoCamp’s design director. “We could have gone in the direction of a more traditional hotel property and built permanent rooms, cabins or larger room structures, but those don’t really fit with the ethos of getting outdoors,” he said. “Sprinkling the Airstreams throughout a larger property is obviously a lot lighter on the land, and that allows us to be in places that wouldn’t normally allow for a hotel of our size.”

AutoCamp started out by renovating vintage trailers on its own but has now developed custom units with Airstream, which has become an investor in the chain. The units feature walnut-plank flooring, minimalist light fixtures with exposed bulbs and spalike bathrooms with sliding barn doors, while the clubhouses are by news-making architects and designers.

Workshop/APD, for instance, which is New York-based and best known for its upscale modern homes and urban new developments, designed the Cape Cod location, near Falmouth, Mass., where nightly rates for Airstreams have recently ranged from just over $300 to more than $500. The firm is at work on the Catskills location, in West Saugerties, N.Y., which is expected to open in the spring.

AutoCamp’s trailers are largely intended to remain on one site, but Moliving, a New York-based hospitality start-up, plans to use the mobile nature of such units to its advantage. The company aims to open its first location, named Hurley House, near Kingston, N.Y., with planned rates from $259 a night, in the coming months, but it intends to tow its custom trailers between different locations to support communities that expand and contract with the weather.

The company might truck units close to the ocean, for instance, to create a beach community in the summer, and then relocate most of them in the cold months to accommodate winter sports enthusiasts.

“What we created was a hotel room that could actually move,” said Jordan Bem, Moliving’s founder and chief executive.

Developed with SG Blocks, a manufacturer of container-based and prefab structures, Moliving’s trailer is designed to be used on or off the grid — with a photovoltaic array and holding tanks for water and waste, and graywater recycling. It includes an integrated deck and motorized twin beds that can slide together to become a king-size bed.

Such park-it-anywhere accommodations are appealing during a pandemic, but the architects behind these getaways expect demand to outlast any virus surge as they channel the nostalgia of the great American road trip.

Mr. Robert said OfficeUntitled had been busy designing more trailer-based cabins for Bay Point Landing, while also fielding calls from other developers who want to build similar RV parks. At AutoCamp, Mr. Spurzem said, demand has “exceeded our initial expectations” since the pandemic began, and the company is now studying about a half-dozen potential new locations.