It’s Thursday. We’ll look at a building in Brooklyn where tenants stopped paying the rent. We’ll also look at a new art installation that projects images onto a huge “shoreline” of oyster shells. 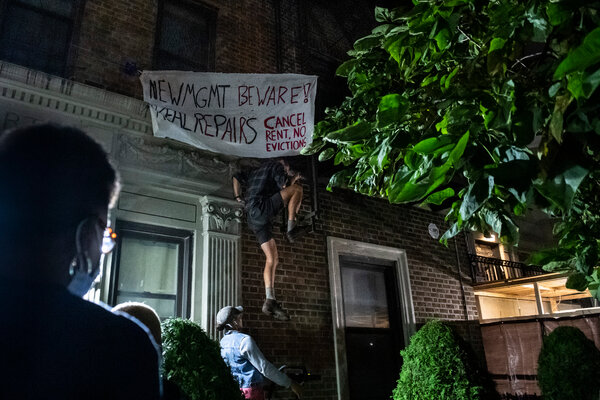 The four-story apartment building at 1616 President Street in Brooklyn is notable for the tall letters spelling out “Ultra Court” that are etched over the front door and flanked by elaborate columns. The building is also notable for the anger percolating among the tenants — anger that has boiled over into a rent strike by about half the residents.

Plagued by problems like cockroach infestations and leaky ceilings, they maintain that repairs have been neglected for too long by a landlord who is described by city officials as one of the most negligent in New York. The city has even gone to housing court, accusing the landlord of falsely claiming that dozens of violations had been addressed and of filing “baseless” eviction papers against tenants.

The landlord maintains that the building has been properly maintained and that tenants have sometimes blocked access to their apartments, preventing maintenance people from doing repairs.

Simmering tensions between landlords and renters are not uncommon in New York, but the rent strike on President Street in Crown Heights has a pandemic-related twist. The outbreak has mobilized tenants to take on their landlords. As my colleague Mihir Zaveri explains, the protest on President Street began in May 2020 when a nationwide protest with the rallying cry “cancel rent” demanded housing relief.

It’s not clear how many other protests that were inaugurated then have lasted. Some landlords — also coping with the financial pain of the pandemic — have struck deals with tenants for reduced payments on back rent. But there’s no question that in New York, many tenants who lost their jobs owe millions in back rent. Government aid programs and a state eviction moratorium that is scheduled to expire in January are all that has kept them in their homes.

At the President Street building, some issues were well known before the pandemic. Jason Korn, the landlord, led the list of the 100 worst landlords in the city issued by the city’s public advocate, Jumaane Williams. The ranking, for 2020, was based on hundreds of open violations of the housing code at several of Korn’s buildings, including 1616 President Street.

The building had 220 open violations, including 32 classified as “immediately hazardous,” as of the week of Sept. 27, according to city records. Rosenblum said the violations had been corrected, but the city’s database had not been updated.

Other city records show that the building was sold last month for more than $3.1 million to another limited liability company. Residents said that workers for a Long Island-based company, Gilman Management Corporation, had recently showed up, claiming to represent the new owners.

Messages left with Gilman and several officers of the company were not returned.

For now, tenants like Patricia Edwards are withholding the rent. Her one-bedroom apartment is on the top floor, and there is a crack in the bathroom ceiling. On rainy days, Edwards, 63, takes an umbrella when she uses the toilet.

She is a retired bank employee who said she had almost never been late with her $1,100-a-month rent. But she joined the protest.

“I took good care of the apartment for them,” she said. “They just refused to take care of it for me.”

Bask in a sunny early-fall Thursday with temps in the 70s. In the evening, we’ll have a mostly cloudy sky and temps in the 60s.

Tell us about a New York moment you’ve had recently. Write it down (in 200 words or less)! Then email us at [email protected] or DM us at @NYTMetro on Twitter.

The U.S. Senate confirmed top federal prosecutors in Manhattan and Brooklyn. One of the two will be the first Black person to lead the powerful Southern District office.

Three women who were involved in an altercation with a hostess at a restaurant on the Upper West Side have been arraigned on assault and harassment charges.

When the oyster was New York’s world

Alan Michelson, a Mohawk artist, explores long-ignored aspects of American history and exploitation of Indigenous landscapes. His new multimedia installation at MoMA PS1 fuses modern media and Native song. It opens today as a centerpiece of “Greater New York,” a once-every-five-year survey of artists in the New York area.

The Times’s Patricia Leigh Brown spoke with Michelson and writes:

To get to Newtown Creek, a severely polluted New York City waterway and Superfund site once teeming with oyster beds, Michelson wended his way past the detritus of industrial Queens — the garbage haulers, the taco truck parking lots, the Mount Everests of scrap metal and building debris being clawed by construction cranes.

Before centuries of colonization, this tidal estuary between Brooklyn and Queens was home ground to the Lenape peoples. Michelson suggests that their nurturing connection to the land and water and the life they support can provide a template for addressing woes of the present day.

The artwork, “Midden,” refers to monumental mounds of oyster shells that were present when Dutch colonialists “settled and unsettled,” in Michelson’s words, what would become New York City. Long before bagels, hot pretzels and pizza, oysters were the regional culinary staple.

In “Midden,” he projects images of two riverine apocalypses — Newtown Creek and the Gowanus Canal in Brooklyn — onto three tons of oyster shells positioned to resemble a shoreline. The shells are on loan from the Billion Oyster Project, a nonprofit with which Michelson collaborated that aims to restore one billion live oysters to New York harbor by 2035, using discarded shells from local restaurants.

Michelson does not consider himself an “environmental artist.” But he has long been preoccupied by the destruction and transformation of the Indigenous environment by colonialism, “from the tiniest plant to the largest nonhumans around,” as he put it. He said that his work ties in to the sense of natural motion found in Native storytelling.

“There is a poetic directness to Alan’s work,” said Ruba Katrib, PS1’s curator. “He’s very precise but opens up all these questions.”

Voters will do more than choose the next mayor in November. Their ballots will also list five proposals. Gothamist reports on what they are.

The Earl Monroe New Renaissance Basketball School in the Bronx opened in September with an unusual focus for a charter school: career paths related to the game.

The Lo-Down wrote about “Cinesymposia,” a new three-part Cinema Salon series coming to the Anthology Film Archives in Manhattan.

I was home for the Thanksgiving holiday and had arranged to meet a friend in New York City. We planned to take in a Broadway musical. It turned out that he could not make it, so I decided to attend a show by myself.

It was before the days of the TKTS booth, when you could sometimes get lucky and score a ticket at the box office.

I went to the Shubert Theater and was able to do just that. “The Apple Tree” was playing, and Phyllis Newman was taking over the lead for the matinee performance on what I believe was her first day in the role.

I was familiar with Ms. Newman from listening to the “Subways Are for Sleeping” cast album and was excited to see her perform live.

Later, as I walked down 44th Street on my way to the theater, I found myself behind a tall, distinguished man in a camel’s hair coat. He was carrying a huge bouquet of roses, and he turned down Shubert Alley near the Astor Hotel while I proceeded to the theater’s entrance.

When the curtain went up, I discovered I had been walking behind Alan Alda.

Glad we could get together here. See you tomorrow. — J.B.

P.S. Here’s today’s Mini Crossword and Spelling Bee. You can find all our puzzles here.

Melissa Guerrero, Rick Martinez and Olivia Parker contributed to New York Today. You can reach the team at [email protected].

Sign up here to get this newsletter in your inbox.