A psychiatrist said in a lecture at Yale University’s School of Medicine that she had fantasies of shooting white people, prompting the university to later restrict online access to her expletive-filled talk, which it said was “antithetical to the values of the school.”

The talk, titled “The Psychopathic Problem of the White Mind,” had been presented by the School of Medicine’s Child Study Center as part of Grand Rounds, a weekly forum for faculty and staff members and others affiliated with Yale to learn about various aspects of mental health.

In the online lecture, on April 6, the psychiatrist, Dr. Aruna Khilanani, who has a private practice in New York and is not affiliated with Yale, described a “psychological dynamic that is on PTSD repeat,” in which people of color patiently explain racism to white people, who deny their attacks. When people of color then become angry, white people use that anger as “confirmation that we’re crazy or have emotional problems,” she said.

She recalled a white therapist telling her in psychoanalysis that she was “psychotic” whenever she expressed anger at racism, and said she had spent “years unpacking her racism to her,” even though she was the one being charged for the sessions.

“This is the cost of talking to white people at all — the cost of your own life, as they suck you dry,” Dr. Khilanani said in the lecture, which drew widespread attention after Bari Weiss, a former writer and editor for the opinion department of The New York Times, posted an audio recording of it on Substack on Friday. “There are no good apples out there. White people make my blood boil.”

Dr. Khilanani added that around five years ago, “I took some actions.”

“I systematically white-ghosted most of my white friends, and I got rid of the couple white BIPOCs that snuck in my crew, too,” she said, using an acronym for Black and Indigenous people and people of color.

“I had fantasies of unloading a revolver into the head of any white person that got in my way, burying their body and wiping my bloody hands as I walked away relatively guiltless with a bounce in my step, like I did the world a favor,” she said, adding an expletive.

Later in the lecture, Dr. Khilanani, who said she is of Indian descent, described the futility of trying to talk directly to white people about race, calling it a “waste of our breath.”

“We are asking a demented, violent predator who thinks that they are a saint or a superhero to accept responsibility,” she said. “It ain’t going to happen. They have five holes in their brain.”

Dr. Khilanani, a forensic psychiatrist and psychoanalyst, said in an email on Saturday that her words had been taken out of context to “control the narrative.” She said her lecture had “used provocation as a tool for real engagement.”

“Too much of the discourse on race is a dry, bland regurgitation of new vocabulary words with no work in the unconscious,” she said. “And, if you want to hit the unconscious, you will have to feel real negative feelings.”

Dr. Khilanani noted that her lecture had initially been well received. After she gave it, several attendees praised her comments on the online feed.

One woman who identified herself as a Yale psychologist called it “absolutely brilliant.” A man said, “I feel very shook in a good way,” and a Black woman thanked Dr. Khilanani for giving “voice to us as people of color and what we go through all the time.”

Dr. Khilanani received her New York State medical license in 2008. Her website says that she has expertise in “seeing both the conscious and unconscious structures of racism/sexism/homophobia/classism” that allow for a safe environment when treating people from marginalized groups.

Ms. Weiss released the recording of Dr. Khilanani’s remarks at a time when many universities are debating teaching about race and racism and the limits of free speech.

The Yale School of Medicine said in its statement that after Dr. Khilanani’s talk, several faculty members had expressed concern about her remarks.

Based on those concerns, leaders at the School of Medicine, in consultation with the chairwoman of the Child Study Center, reviewed a recording of the talk and “found the tone and content antithetical to the values of the school,” the statement said.

Because Grand Rounds are typically posted online, the statement said, school leaders then reviewed a university report on free expression at Yale in deciding how to handle Dr. Khilanani’s lecture.

“In deciding whether to post the video, we weighed our grave concern about the extreme hostility, imagery of violence, and profanity expressed by the speaker against our commitment to freedom of expression,” the statement said.

Ultimately, school leaders decided to limit access to the video to those who could have attended the talk — the members of the Yale community.

School leaders also added a disclaimer to the video to “emphasize that the ideas expressed by the speaker conflict with the core values of Yale School of Medicine,” the statement said.

Dr. Khilanani posted several videos on TikTok addressing what she called Yale’s “suppression of my talk on race.” In her email, she called on Yale to release the video, and she said in a phone interview that Yale should not have been surprised because “they knew the topic, they knew the title, they knew the speaker.” 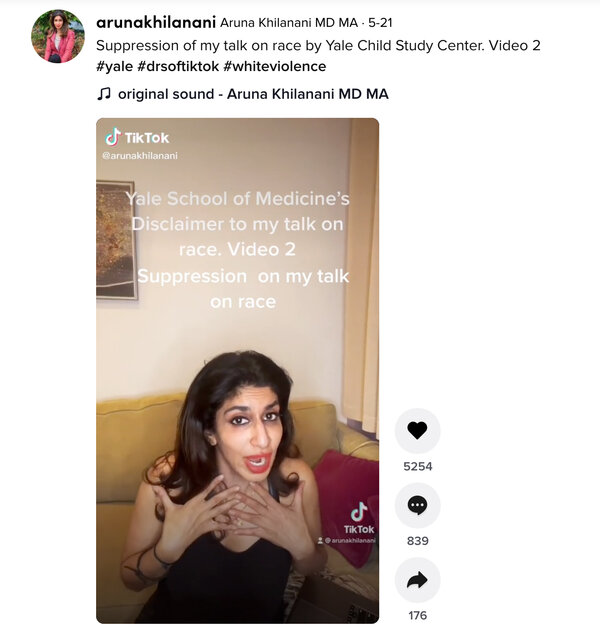 She said the university was trying to protect itself from internal and external blowback.

“Something is emotionally dangerous about opening up a conversation about race,” she said in the email. “No one wants to look at their actions or face their own negative feelings about what they are doing. The best way to control the narrative is to focus on me, and make me the problem, which is what I stated occurs in the dynamic of racism.”

She added: “My work is important. And, I stand by it. We need to heal in this country.”

Dr. Nicholas A. Christakis, a Yale professor of social and natural science, internal medicine and biomedical engineering, was among those who had criticized Dr. Khilanani’s lecture.

He said on Twitter that the views that Dr. Khilanani had expressed, which he referred to as “racism,” were “deeply worrisome & counter-productive.”

“Of course, as an invitee, she is free to speak on campus,” Dr. Christakis said. “But her views must be soundly rejected.”