During a week of anger, confusion, accusations and disappointments over Covid-19 vaccine delays, it wouldn’t be surprising if you missed some other news out of Canada unrelated to the pandemic. 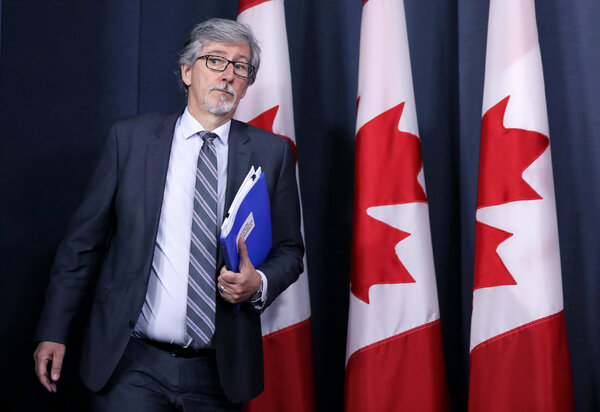 That included the findings of an investigation by Canada’s federal privacy commissioner and some of his provincial counterparts into facial recognition software made by Clearview AI, which allows users to compare faces against three billion photos lifted from social media accounts and other online postings.

“What Clearview does is mass surveillance and it is illegal,” Daniel Therrien, the federal commissioner, said at a news conference on Wednesday. “It is an affront to individuals’ privacy rights and inflicts broad-based harm on all members of society, who find themselves continually in a police lineup.”

Mr. Therrien and his fellow commissioners have sent Clearview AI a formal letter demanding that it stop selling facial recognition services in Canada, end the scraping of Canadians’ faces from the internet and delete the images already in its collection.

The investigation in Canada was prompted by a report published just over a year ago by my colleague Kashmir Hill, who first exposed the app and its use by law enforcement.

Her article broke the wall of secrecy surrounding the company, which was founded by Hoan Ton-That, an Australian iPhone developer and a onetime model. His backers include Richard Schwartz — a former aide to Rudolph W. Giuliani when he was mayor of New York — and Peter Thiel, the venture capitalist behind Facebook and Palantir.

The Canadian investigation found that dozens of Canadian law enforcement agencies and organizations across the country have used the app, including the Royal Canadian Mounted Police. The federal commissioner is still conducting a separate investigation into the Mounties’ use of the technology.

The privacy commissioners found Clearview AI in breach of key laws that require it to obtain consent to use photos it collected in its database.

In its submissions to the investigation, Clearview AI contended that it needs consent no more than Google does for prowling the internet to fill its search engine.

Nevertheless, Clearview AI quit the Canadian market last summer. As an American corporation, it rejected that Canada’s laws apply to its business.

“This is a simple issue of public information and who has access to it and why,” Mr. Ton-That told The Times, adding that he was keen to take the privacy commissioners to court.

Currently the privacy commissioners have no power to fine or reprimand the company, but a bill before Parliament to update data privacy laws would allow the federal commissioner to impose fines of 25 million Canadian dollars or 5 percent of a company’s gross revenue.

Other internet legislation is on the horizon that may deal with another issue Ms. Hill wrote about this week. She told the nightmarish stories of several Canadians who have struggled to get false online postings labeling them as child molesters, pedophiles, thieves and scammers taken down. While they’ve sometimes been successful, the outrageous lies have not stopped.

[Read: A Vast Web of Vengeance]

In several recent interviews, Steven Guilbeault, the minister of Canadian heritage and the author of a recent book on artificial intelligence, indicated that the government planned to create a regulator for Facebook, Google, Twitter, YouTube and all other online platforms as well as a “Canadian code of conduct.”

Whatever Mr. Guilbeault introduces, one thing is already clear based on efforts in Australia and elsewhere: The internet’s corporate behemoths are not going to accept limits on their powers without a fight.

Murray Sinclair, the former judge who reshaped the discussion between Indigenous people and Canadians, has retired early from the Senate. When we spoke for a profile, Mr. Sinclair discussed a period of doubt and frustration when he almost abandoned law to take up carpentry.

Peter Nygard will not be released on bail as he awaits an extradition hearing on sex-trafficking and other charges in the United States. Justice Shawn Greenberg said she lacked confidence that the 79-year-old multimillionaire would comply with a bail order to not contact witnesses in the action against him.

Canada became the first country to formally declare the Proud Boys a terrorist organization. Among other things, the action makes it a crime to support or help fund the group, including buying clothing and other promotional items from the group that played a prominent role in storming the United States Capitol last month.

A group of large Canadian corporations has started a rapid testing program for Covid-19 to protect their 350,000 employees and with the aim of creating a playbook for safe reopening during the pandemic. Some experts, however, want the tests to be used at schools and long-term care homes.

A native of Windsor, Ontario, Ian Austen was educated in Toronto, lives in Ottawa and has reported about Canada for The New York Times for the past 16 years. Follow him on Twitter at @ianrausten.

How are we doing?
We’re eager to have your thoughts about this newsletter and events in Canada in general. Please send them to [email protected]

Like this email?
Forward it to your friends, and let them know they can sign up here.