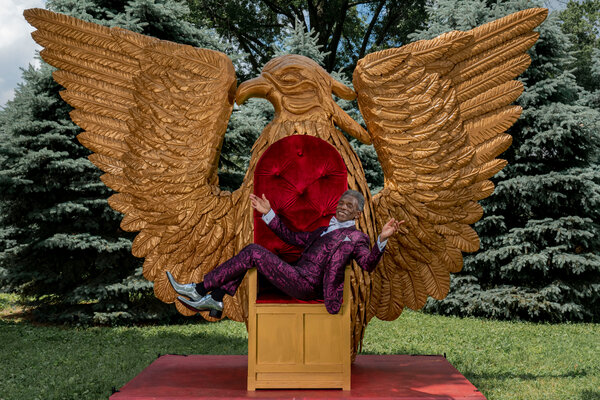 ST. LOUIS — It takes André De Shields two and a half hours to lose his mind.

His turbulent descent into madness, as King Lear at the St. Louis Shakespeare Festival in Forest Park here, comes with the moments of grandiosity we now expect from the man who won a Tony Award for playing a god, Hermes, in “Hadestown” on Broadway. He dances onto the stage in one early scene, jubilantly waving an automatic weapon in the air alongside the Afrofuturistic soldiers of his North African nation; later he stumbles through the park in a leafy makeshift crown, hollering in the face of an unsuspecting patron seated in the grass.

But De Shields’s towering presence is somehow more captivating in the quiet beats — perhaps most strikingly when he carries the corpse of his daughter in his arms, unwavering, halfway across the stage.

“André has a natural majesty and regality in his being that to me denotes majesty and command, just the way he moves through time and space,” the director, Carl Cofield, said in an interview. “And I’m happy to report that he brings it.”

De Shields, 75, has kept remarkably busy through the pandemic: When Broadway theaters were shuttered, he portrayed Frederick Douglass in a one-man performance at Flushing Town Hall in Queens, starred in “Ratatouille: The TikTok Musical,” did a virtual reading at Red Bull Theater, narrated a Greek mythology-inspired audio series. And between his closing-night performance of “King Lear” on June 27 and his return to “Hadestown” on Broadway on Sept. 2, he has concert performances lined up at the Cabaret in Indianapolis and Feinstein’s/54 Below.

During a recent phone interview, De Shields discussed returning to Broadway, the importance of believability in storytelling and playing Lear a second time. These are edited excerpts from the conversation.

How do you have the strength and stamina to pull off the kind of physically demanding performance you’re giving in “King Lear”?

We had a long discussion about, first of all: Was André De Shields fit enough, strong enough, to carry his daughter Cordelia, who is actually taller than he is? I convinced my collaborators that is not the question to be asked — because I am strong at 75, I’m physically fit.

The real question is: Considering the emotional roller coaster that King Lear has to ride in this play, how could you even consider that he wouldn’t have the delicious burden of having to carry the corpse of his daughter that he so mistreated? To have the king not carry the body, you’d have the entire audience questioning the validity of the performance. I use as my evidence the film version of King Lear that was done by the master Lear, Sir Laurence Olivier. He does the “how, how, how” speech, and he’s holding Cordelia in his arms, but cinematic technology had not advanced so much then that if you looked very hard, you could see the piano wires holding up the body.

Even then as a young person, I thought, this is outrageous. It absolutely undoes the excellence of the performance to know that any part of it is false. Now, I had no dreams of doing “King Lear” at the time, but it was a lesson that I took into my toolbox about the believability of storytelling. So when it came for my first experience in assaying the role of Lear, which was in 2006 with the Classical Theater of Harlem, the director said to me, “As much as I want you to play the role, if you cannot carry Cordelia’s body onstage, I can’t cast you.” And I said, “Well, you’ve chosen the right guy. Because not only can I carry her body onstage; I can do the entire monologue with her in my arms.”

That was during the marking of my 60th birthday, and I thought then, I’d like to revisit Lear in about 10 years. So this was 15 years later, and the question comes up again. And my response was the same. I must. I can, but it must happen.

It is believed that Shakespeare wrote this play on the heels of a pandemic. Has that been on your mind in preparing for this show during such a unique time?

Yes. It is informed by that bubonic plague, where the ordinary citizen, if you will, was reacting to the same things we were reacting to: fear, outrage, chaos, stasis, all of the rules of society that come to bear when the playing field has been finally leveled. What the pandemic did was to create a kind of society where everyone had to obey the same rules — whether you’re rich or poor or white or Black, you have to wear the face mask, you have to practice physical distancing, you have to shelter in place. And this drove people nuts. It drove me nuts.

So part of what we are revealing here is that the king that we are encouraged and taught to have so much empathy for is probably one of the most specific illustrations of unmitigated white male supremacy, and all of the evils that go with it — like homophobia, misogyny — that’s all part of the king’s character. You can’t see it immediately because it’s hidden by so much language. But when you strip that language away, you see exactly that this is a man, to put it mildly, who does not like womanhood and blames everything on what he sees as the evil of his daughters. So the lesson that he knows at the end, when he bemoans the death of Cordelia, is a lesson for us in the 21st-century world. The lesson we learn about empathy is for 21st-century America still going through the woes of the pandemic.

Did you approach this role differently than you did 15 years ago?

The first thing I did was to forget that I had done “King Lear” before. I had to look at this man through the eyes of someone who was now closer to his specific age. That’s why I mentioned that the first time I did it, I was 60. The second time I’m doing it, I’m 75. So the next time I do it, I will be age-specific: King Lear is remembered to be 83. And I am going to do it a third time.

But what is more important than the relativism of age is the curiosity that is lodged by doing the play a second time. One of the things we lose as we mature is curiosity: being interested in things other than yourself, other than your corner of the world. But returning to “King Lear” during a pandemic has actually opened me up. And that muscle of curiosity is stronger than it’s ever been — which is one of the reasons why, for two and a half hours, I can assault the stage the way I do.

In a year in which many of us have struggled with staying productive and creative, how have you kept this busy?

I’ve been answering the call that is obvious, to me anyway, that the zeitgeist, the paradigm, is changing. And it’s calling for healers, those of us who see the malady, who want to look for the people who understand that this is the time for coordination, cooperation, communication, collaboration. We need one another.

How does it feel to be coming back to “Hadestown”?

I don’t know if you’re familiar with my Tony Award acceptance speech — I received my award and shared with the audience what I called my three cardinal rules for sustainability and longevity. Because they tell you if you’re fortunate enough to receive the award, you have only 90 seconds to speak — and I’ve seen too many of my colleagues try to thank 100 people in 90 seconds. You can’t do it. So I thought, let me drop a wisdom bomb.

The first thing I said was, surround yourself with people whose eyes light up when they see you coming. Rule No. 2 was: Slowly is the fastest way to get to where you want to be. And then the third, which is why I’m bringing this whole thing up: The top of one mountain is the bottom of the next. As you achieve different pinnacles, don’t ever think you’ve made it. Don’t ever think you’ve arrived. Take a few moments, take in the view, the vista, the panorama, then lift your chin and see there is another mountain that you have to ascend. That’s called life.

The pandemic interrupted the timing of that particular mountain. So I want to get to the pinnacle of “Hadestown” and then look up and keep climbing. Now I’ve already mentioned, but one of the other mountains is the third time that I play the role of King Lear — and then I want to direct it.

But here’s my mountain of mountains: I want to break the Methuselah Code. Methuselah is the longest living individual in the history of mankind. He lived to be 969 years. I want to live to be 970.