FLORENCE, Italy — One recent afternoon, the architect Gian Piero Frassinelli, 81, stopped on a walk through a piazza near his home, and pointed at a fresco high above on a building’s facade.

The illustration depicts an entourage of local luminaries, including Dante, the poet, and the painters Leonardo da Vinci and Giotto. Many would view the scene as a tribute to Florence’s historic golden age. For Frassinelli, however, it represents the city’s disrespect for its creative sons.

“Until after their deaths, this city’s artists are destined to be rejected,” he said.

As the last surviving core member of Superstudio, Frassinelli should know. That radical architecture collective galvanized the design world during a MoMA exhibition in 1972, and its futuristic vision zigzagged the globe. Although Superstudio built very few actual buildings, its witty photo collages and designs, presented in exhibitions and glossy magazine spreads, opened up new possibilities for what architecture and urban planning could be. 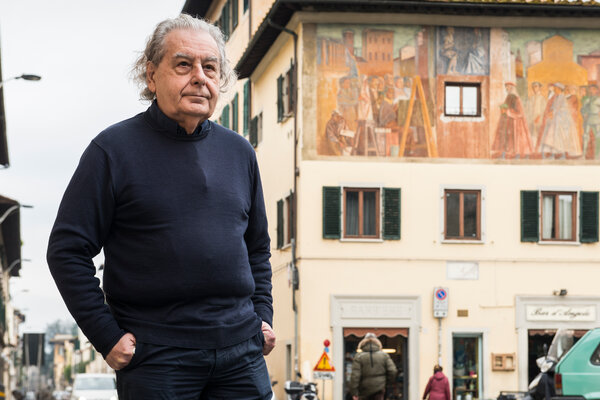 Some of the biggest names in the business in the 21st century — including Zaha Hadid, Rem Koolhaas and Bernard Tschumi — have spoken of the group’s influence on their work, and, in the 1960s, Superstudio helped establish Florence as a hotbed of avant-garde design. Yet today, the city’s museums contain hardly any references to the pathbreaking group.

Six-hundred miles away, in Brussels, the CIVA museum is currently showing a sweeping survey of “Superstudio’s” work, through May 16. Titled “Superstudio Migrazioni,” it includes over 500 objects, including some of the group’s most famous photomontages, furniture and interior designs, as well as previously unpublished letters. Ninety of the works are on loan from the Pompidou Center in Paris.

The starting point of everything Superstudio did was dissatisfaction with the uniformity of modern architecture, which its left-wing members saw as an instrument of capitalism that disempowered the masses, robbing them of their individuality and freedom. Sometimes, they made fun of the status quo, or took it to absurd conclusions; other times, they imagined utopian futures.

One photo collage series, called “Continuous Monument,” depicts a monolithic shape slicing through deserts, spanning the Grand Canyon and gliding over the Hudson River to superimpose Lower Manhattan’s grid with its own lattice design. This form’s unstoppable advancement through natural and urban landscapes seems to warn against the dulling effect of clean modern lines and the dangers of unchecked urban expansion.

“In the West, man is a prisoner of architecture,” Frassinelli said in an interview at his home. “We therefore attacked architecture.”

Also on display in Brussels are the group’s range of lurid-colored sofas, which mock the ’60s fetish for functional design, and “Supersurface,” a series of drawings and collages that show nomads roaming a fantasy landscape, freed of consumerist desire.

Planning began three years ago, with the show’s curator initially guided by Superstudio’s two founding members, Cristiano Toraldo Di Francia and Adolfo Natalini. But Di Francia and Natalini died in July 2019 and January of last year, transforming the exhibition into a posthumous tribute to their work.

After meeting at Florence University, Di Francia and Natalini formed Superstudio in 1966. At the time, architecture was moving in a more conceptual direction, away from simply designing buildings: Some of its most exciting practitioners were producing plans for structures that would never — could never — be built.

Archigram, an avant-garde British group, launched in 1961, took inspiration from sci-fi literature in its designs for impossible buildings and movable cities on legs. Those hypothetical designs inspired Superstudio and other Italian collectives — with futuristic names like Archizoom, 9999 and U.F.O. — in a movement that became known as “radical architecture.”

Soon after it formed, Superstudio joined with Archizoom to put on a landmark exhibition, “Superarchitecture” that set out the movement’s ideas. The show’s poster explained: “Superarchitecture is the architecture of superproduction, super consumption, supermarket, superman.” But rather than celebrating capitalist excess, Natalini and Di Francia’s designs poked fun. They presented garish striped sofas, children’s playground slides and lamps shaped like flowers and rainbows.

The duo gradually welcomed new members, until there were six. Frassinelli joined in 1968, after impressing his colleagues a series of short dystopian texts that were later published with accompanying designs under the ironic title “Twelve Ideal Cities.”

“We were all very interested in science fiction, which we believed was an extraordinary tool for analyzing contemporary urban culture,” Frassinelli said. Some of the designs might seem fanciful — like a city with a 2,000-ton ceiling that descends to crush rebellious inhabitants — but they were made to explore the realities of urban life, Frassinelli said. “We wanted to show 12 elements of real cities taken to their logical limits,” he added.

With time, Superstudio shifted its focus from buildings to people. In “Supersurface,” roaming communities plug themselves into an energy matrix that lines the earth’s surface, satisfying their primal needs in a world free of architecture altogether.

Bernard Tschumi, the New York-based creator of buildings such as the Parc de Villette, in Paris, and the Acropolis Museum, in Athens, recalled in a Zoom interview that he first met Superstudio’s members in 1972, the year they produced “Supersurface.”

In the decade before, architecture had been locked in a stalemate, he said, but Superstudio’s willingness to look outside the field had opened up new paths. “They were able to wipe the slate clean, and look at other disciplines, like art or literature, in order to build something new,” Tschumi said.

Superstudio used the media of architecture, such as models and urban plans, to reform old ways of thinking within the profession, Tschumi added. “They would use the tools of design, but against design itself. And that was quite fascinating, because it suggested you could invent a new world with the old tools, which were the only tools we had,” Tschumi said.

The group’s critical stance was forged in the lecture halls of Florence, when a whirlwind of activism howled through the city’s university in the early 1960s.

Students at the time wanted a break with the past. In the architecture faculty, they were incredulous that the syllabus still included architecture from Italy’s fascist period, and they demanded the professor who taught that course be fired. Across the university, students occupied their departments, canceled lectures and met in their own assemblies instead.

Frassinelli, an active participant in the movement, said that this anti-establishment climate gave Superstudio’s members a sense of political purpose, and entrenched them in counterculture lifestyles that continued after they graduated and formed the group. “We, our wives or girlfriends, and children, were almost a commune. We spent practically all of our time together, seven days a week,” he said.

But as the members matured, their interests diverged. Superstudio drifted apart, and dissolved in the late 1970s.

In the interview, Frassinelli said he was just as contemptuous of contemporary architecture as he was with the modern buildings of the 1960s, when he was first drawn to Superstudio. “Today’s starchitects do not create architecture for the people,” he said. “They make it for the fame and the money,” he said.

One recent project had particularly annoyed him, he added, because it looked like something Superstudio might have designed.

Last month, Saudi Arabia’s crown prince unveiled plans for a 100-mile-long linear city, known as “The Line.” The $500-billion urban belt would be car-free, powered by renewable energy and regulated using artificial intelligence. The designs show the future city extending across the Arabian desert in an unbroken line, and promise a “revolution in urban living.”

Frassinelli said the project had echoes of “Continuous Monument,” both for its immense linear form, and its mission to establish a single urban design over an extensive territorial span. But it had failed to grasp the series’ ironic intention, he said.

“Seeing the dystopias of your own imagination being created is not the best thing you could wish for,” he added.

Chiappone-Piriou, the curator of the show at CIVA, in Brussels, said the ambiguity of Superstudio’s work meant it had often been misinterpreted. While the group hoped its nightmarish worlds would never exist, too often its satirical cautions were taken at face value.

Better understanding of Superstudio’s work could help today’s architects as they adapt to challenges posed by the coronavirus pandemic, mass migration and the climate crisis, Chiappone-Piriou said.

“Every discipline, in moments of doubt, looks back to moments in history when it has been able to reinvent itself,” she said.

Superstudio did that by thinking beyond architecture’s boundaries, Chiappone-Piriou said. “They were not problem-solvers. They were not going to save the world,” she said. “What they did was regenerate architecture by asking the right questions.”