It’s been a very different Climate Week in New York City this year, and not just because of social distancing. For the first time, the annual gathering, meant to showcase efforts against global warming worldwide, came as climate disasters pummeled the host country.

There were fire tornadoes in the American West; a slow-moving hurricane drowned northwest Florida; children in Silicon Valley breathed a bit of the foul air that children in the shanties of Delhi grow up with.

It was, in other words, the year climate change made itself known as a problem that also affects the richest country in the world, not just low-lying islands of the Pacific and arid swaths of Africa.

It was also a year of big promises.

Two of the world’s three biggest economies, China and the European Union, pledged to act more quickly to cut their emissions of greenhouse gases, like carbon dioxide, into the atmosphere. And climate change became an issue in the United States presidential race. When asked recently about the links between global warming and the fires racing across California, President Trump said, “I don’t think science knows,” even though scientists say the connection is inextricable. The Democratic candidate, Joseph R. Biden Jr., responded by calling him a “climate arsonist.”

Titans of global business and finance, under pressure from shareholders, customers and employees, also pledged to do better, with company after company talking up their voluntary climate ambitions over the last few days during online events. Even so, the world as a whole is nowhere close to where it needs to be to avert the worst effects of a warming world, like more wildfires, fatal heat waves and the inundation of coastal cities.

So, what needs to happen next? Here are three key takeaways. 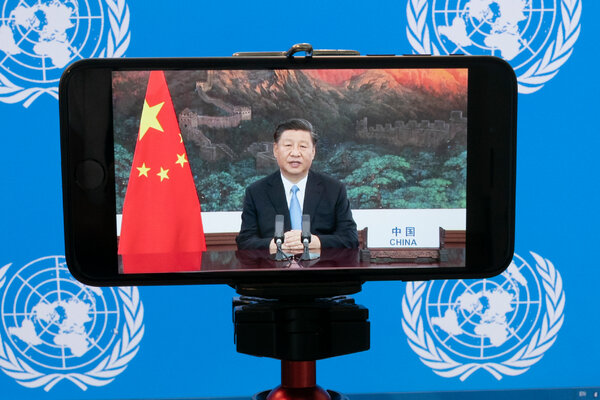 There’s a lot riding on the U.S. election

The richest people in the world, because of what they consume, have produced a huge share of greenhouse-gas emissions, and in a very short period of time. Emissions into the atmosphere of carbon dioxide and other gases, largely from the burning of fossil fuels, trap the sun’s heat, contributing to global warming.

A recent analysis conducted by Oxfam and the Stockholm Environment Institute found that around half of all the planet-warming gases produced between 1990 (when the first United Nations climate report was published) and 2015 (when the Paris climate accord was reached) came from the world’s richest 10 percent.

If you divvy up emissions by countries, nearly half, about 44 percent, of all emissions that have accumulated since 1990 come from the United States, the nations of Europe, and China. That’s why any chance of actually averting climate catastrophes depends largely on what these economies do.

In September came some signs of movement. Two of the three announced plans to make sharp cuts, though many details remain unknown.

In mid-September, the European Union president, Ursula von der Leyen, proposed more aggressive emissions cut by the 27-member bloc in the next decade. Her new target, which is yet to be approved by the European Parliament: trim emissions by 55 percent by 2030, compared to 1990 levels. The European Union has already committed, by law, to become carbon neutral by 2050, which means reducing carbon dioxide emissions and offsetting those that remain by figuring out how to offset their impact.

A week later, President Xi Jinping of China announced in an address to the United Nations that his country, too, would speed up its climate plans, with a target to be carbon neutral before 2060.

That leaves the United States. And it makes the results of the November elections crucial to global efforts to avert catastrophic climate change.

Mr. Trump rejects climate science, has pulled the United States out of the Paris accord, an international agreement designed to slow down temperature rise and avert the worst climate impacts, and rolled back a series of environmental regulations. His challenger, Mr. Biden, has promised to bring the United States back into the Paris Agreement and proposed to invest $2 trillion to address climate change by, among other things, spurring the development of clean energy infrastructure.

By the time the United Nations convenes a meeting on Dec. 12 for world leaders to update their climate commitments under the Paris Agreement, the United States will be out of the accord or on its way back in.

“We must urgently reverse course,” he added.

At Climate Week, which started Monday and wraps up Sunday, a range of companies said they would reduce their own greenhouse gas emissions faster than they had pledged before. Walmart said it would aim to be carbon neutral without relying on offsets, like planting trees, which is how many companies plan to meet their climate targets.

A dozen big companies that sell food joined an effort to get some of their suppliers to cut food waste in half, and gave themselves a decade to get there. Food waste, when it ends up in landfills, produces methane, a supercharged greenhouse gas.

Some of the largest institutional investors joined together to push companies they invest in to disclose climate risks more fully.

General Electric said it would stop building new coal-fired power plants, but it came at a time when the demand for new coal fired power plants is plummeting. The oil giant BP this month declared the end to the growth of oil demand. And Morgan Stanley, financial backer of many fossil fuel projects, announced this week it would aim to neutralize the emissions that result from its investments, but revealed few details.

All of these commitments are voluntary. Whether they abide by their promisers remains to be seen.

A chance to rewire the global economy

The coronavirus pandemic, having inflicted a million deaths so far, offered a chance to reset — both at the individual and collective level. There were numerous calls to use this moment to pivot to a sustainable economy that isn’t driven by fossil fuels. By and large, that has not happened so far.

Governments continue to subsidize fossil fuels, including in countries in the European Union. India has recently opened up its coal mining sector to foreign investors, with an eye to ramping up its coal production. Australia remains bullish on coal exports (partly to India).

In the world’s 20 biggest economies, the Group of 20, as they’re known, coronavirus recovery packages doled out $212 billion to fossil fuels, and a far smaller share to renewable energy sources, according to an analysis by a consortium of research and advocacy groups.

Another analysis, by the Rhodium Group, an independent research firm, concluded that only the European Union had committed to devote as much as 20 percent of its total stimulus spending to sustainability, compared to only 1 percent to 3 percent in coronavirus stimulus packages by the United States, China and India.

Around this time last year, during Climate Week 2019, millions of young people thronged the streets of world capitals with a message for world leaders: “You had a future, and so should we,” they chanted.

The coronavirus shuttered their street protests for months. This Friday, they plan to hit the streets again for their first mass protests in cities where they say it’s safe to hold outdoor public gatherings. Their message is increasingly pivoting to the present moment.

“The climate crisis is our reality, we’re striking for our survival,” said Disha Ravi, 22, an activist in India.