Milestone birthdays are always a big deal and a cause for celebration, so former President Barack Obama is throwing himself a 60th birthday party on Friday. But many in the Martha’s Vineyard, Massachusetts area are concerned that a large, ahem, very large party of over 400 people isn’t the best look amid concerns that the Delta variant cases of COVID-19 are rising rapidly. 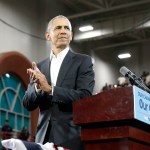 
Here's What Barack Obama Is Reading This Summer

According to CNN, the Obamas plan to follow a strict set of rules for their guests, including holding the event outside, require mandatory testing before entering the party and have “a COVI safety coordinator on site.” But is that enough even though the area is only experiencing a “moderate” rise in cases? The celebration is expected to take place at the couple’s $11.75 million waterfront home that’s spread across 29.3 acres. While that may seem like enough room to social distance, but as we’ve seen with Lollapalooza this weekend in Chicago —  once people get partying, it’s tough to make that happen.

The guest list, of course, is strictly A-list with The Hill reporting that George Clooney and Oprah Winfrey (plenty of time for her to attend BFF Meghan Markle’s 40th birthday on Wednesday) are coming, and Axios has Stephen Spielberg making the cut with Pearl Jam performing for the crowd. One person who will not be attending is President Joe Biden, whose spokesperson made sure to mention to Axios that Biden “looks forward to catching up with former President Obama soon and properly welcoming him into the over-60 club.” In addition, to the high-wattage crowd, the event is requiring over 200 staff members to keep things running smoothly.

Dr. Francis Collins, the Director of the National Institute of Health, spoke to CNN and confirmed what many people are thinking — it’s not the best idea to have a large party — inside or outside — at this time. “Maybe there are some immunocompromised people there, who, though, they are vaccinated, are not fully protected, the dynamic changes,” he explained. “There will be need for common sense there.”

One lovely gesture coming out of Obama’s 60th birthday is the charitable component of the party. Per an Axios insider, “Guests are being asked to consider giving to programs that work to support boys and young men of color and their families here at home in the United States, empower adolescent girls around the world, and equip the next generation of emerging community leaders.” The 44th president probably has everything he needs in terms of material possessions, but we all need to remember that good health is the most precious gift of all.

Before you go, click here to see presidential families over the years.