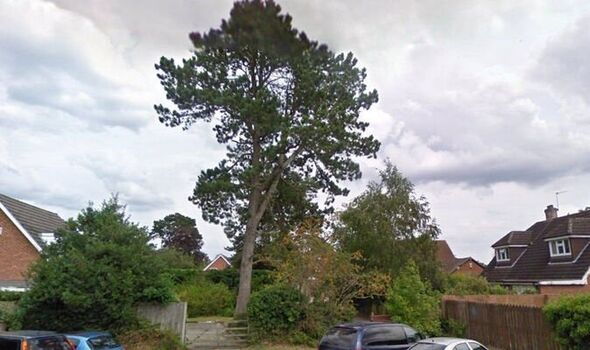 A group of campaigners in Mortimer, outside Reading, have written to councillors to see the preservation of a 100-year-old tree to be removed. They say the tree’s presence has caused them “fear, stress and anxiety”.

In a report that will be presented to the council ahead of a final decision on Wednesday, neighbours complained that the tree looked as if it could fall over at any moment.

One campaigner even went as far to suggest the presence of the pine tree on the residential street was infringing on their human rights.

But, officers at West Berkshire Council said that the safety risk of the tree falling over was miniscule.

Tree preservation orders are used by local planning authorities in England to protect specific trees or woodlands from harm in the interest of the public.

This means owners are not able to cut down, uproot or damage the tree being conserved without consent from the authority.

According to legislation, a council can do this if it appears “expedient in the interests of amenity to make provision for the preservation of trees or woodlands in their area”.

However, residents of The Bever have said that the tree was insignificant, and there were many more like it in the surrounding area.

One resident, Robert Birch, said: “I am somewhat puzzled that in a village full of mature trees and surrounded by pine woods there is a need to place a [tree preservation order] on this tree.”

Meanwhile, Rosie Foster-Williams wrote: “The anxiety I suffer because of worrying about the tree falling is making my state of health worse.

“The tree is not safe to be in a residential area due to its height and heavy unbalanced top.

“The Equality and Human Rights Commission says everyone has a right to and to enjoy their home peace.”

Other locals claimed the tree was misshapen, unbalanced and unremarkable, and thus should not enjoy its current protected status.

Yet, the council’s tree officer said that the anti-arboreal activists’ very campaign was a reason to keep the order in place.

Jon Thomas wrote in his report: “There is a foreseeable threat to the tree in that the owners wish to remove it and neighbours object to it.

“It therefore meets assessment criteria to warrant the confirmation of the preservation order.”

Mr Thomas dismissed the safety fears as being overblown, stating that the risk posed by the tree was “extremely low”.

He said that the probability of being killed by one in a year was “one in ten million”.

Mr Thomas argued that the area was already “largely devoid of significant trees”, a further reason for it to stay.

Councillors in West Berkshire are expected to decide the tree’s fate at a planning meeting on Wednesday.