The trove of materials from the police department’s public integrity unit (PIU) raises new questions – and renews outrage – about the information used to obtain the “no-knock” warrant that ultimately led to Taylor’s death.

Taylor, an unarmed Black woman, was killed in the early hours of March 13, when plainclothes Louisville Metro Police Department (LMPD) officers conducting a narcotics investigation barged into her home while serving a “no-knock” warrant, which allows officers to enter a premises without first making their presence known.

Police say that despite the warrant, they knocked and announced their presence several times before entering the apartment. But Taylor’s boyfriend, Kenneth Walker, and several neighbours said they did not hear police announce themselves.

Walker said he fired one shot, mistaking police for intruders. Police then unleashed more than 30 rounds, hitting Taylor several times. She died in her hallway. One police officer was injured. No drugs, money or paraphernalia were found.

Taylor’s ex-boyfriend, Jamarcus Glover, was one of the main targets of the investigation that led to the raid on March 13.

Detective Joshua Jaynes, the officer who applied for the warrant, swore in an affidavit that he had “verified through a US Postal Inspector that Jamarcus Glover has been receiving packages” at Taylor’s home.

But Jaynes later admitted he did not speak directly to the postal inspector, instead relying on another officer, Sergeant Jonathan Mattingly, who had connections to the postal service, according to the PIU files.

Mattingly contacted the police department in Shively, a suburb of Louisville. The Shively Police Department was told by the postal inspector that “no boxes” were delivered to Glover at Taylor’s address. That message was then delivered to Mattingly and other officers, the PUI files show.

“I could have worded a little bit differently in there,” Jaynes told investigators, referring to the affidavit used to obtain the warrant. 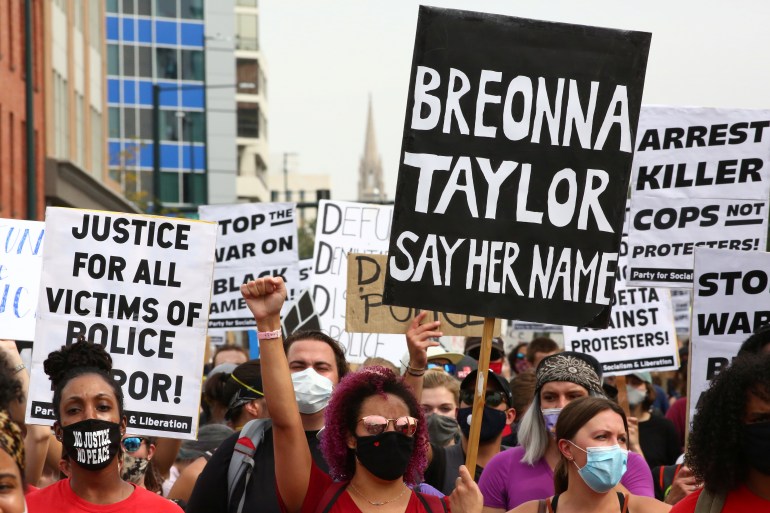 Protesters march against racial injustice following the grand jury decision in Louisville’s Breonna Taylor case [Kevin Mohatt/Reuters]“The wording on the affidavit is misleading,” Sergeant Jason Vance wrote in a summary of the investigation. Vance also said that “given Jaynes’s statement related to the information, [it] should be reviewed for criminal actions”.

Jefferson Circuit Judge Mary Shaw, who signed the search warrant, previously told The Courier-Journal that she was concerned Jaynes lied to obtain the warrant after reports surfaced raising questions about the case.

But the PIU documents released this week marked the first time the public learned the extent to which Jaynes may have misled the judge.

The PUI files also include body camera footage, transcripts and audio of interviews with officers and witnesses, additional reports written by investigators, and photos and videos that may be “disturbing and traumatic” to some individuals, the LMPD said.

“Some items have been redacted, blurred or withheld for privacy or legal reasons,” the department added.

We have so much momentum that if we stop now, we won’t get any of the change that we’re seeking.

Louisville Mayor Greg Fischer said in a statement on Wednesday that “It was important to release the PIU files as quickly as possible to the public, after making necessary redactions”.

Fischer has been criticised by protesters for not sacking all the officers who fired their weapons on the night Taylor died.

He noted that much of the information found in the files was included in the records of the grand jury proceedings, which were released last week following pressure from Taylor’s family and protesters.

Kentucky Attorney General Daniel Cameron examined the materials gathered by the PIU, but also conducted his own investigation into the case. Additional documents that may be part of Cameron’s investigation were not included in the material released on Wednesday.

“The scope of our investigation did not include the obtainment of that warrant by LMPD’s Criminal Interdiction Division. Federal law enforcement partners are conducting that investigation,” Cameron said last month after presenting his findings to a grand jury.

The grand jury declined to indict any officers on charges related directly to Taylor’s death, but it did indict former officer Brett Hankison, who was fired from the police department in June, on three counts of wanton endangerment for “blindly” firing into neighboring apartments.

Cameron said Sergeant Mattingly and Detective Myles Cosgrove, who also fired their weapons, were “justified” in their actions because Walker fired his weapon first. 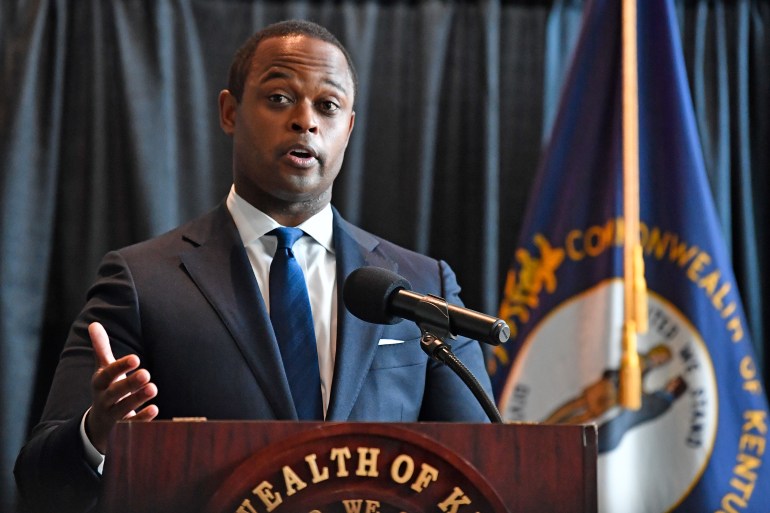 Kentucky Attorney General Daniel Cameron has faced a barrage of criticism for his handling of the Breonna Taylor investigation [Timothy D. Easley/AP]Following the announcement of the grand jury indictments, an anonymous grand juror asked the court to allow him or her to speak freely about the case, accusing Cameron of using the jurors “as a shield to deflect accountability and responsibility”.

Cameron on Wednesday filed a motion to dismiss that case, saying he has “no concerns with a grand juror sharing their thoughts or opinions about me and my office’s involvement in the matter”. 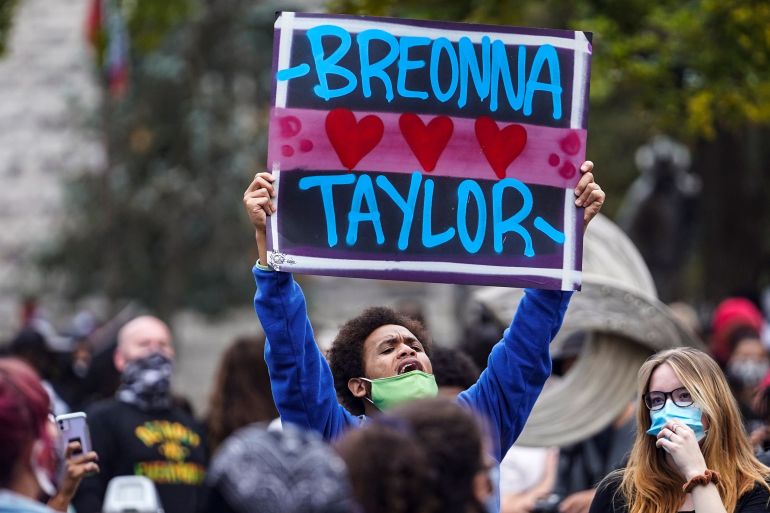 A man holds up a sign after a grand jury voted to indict one of three white police officers for wanton endangerment in the death of Breonna Taylor, a Black woman who was shot dead by police in her apartment, in Louisville, Kentucky, the US, on September 23, 2020 [Bryan Woolston/Reuters]Sam Aguiar, the Taylor family’s Louisville-based lawyer, said on Facebook that Cameron “knows that grand jurors feel betrayed. He knows he lied to the public and placed it on the grand jurors”.

He noted that “Deliberations are done. The witnesses already testified and the audio was released already. Everyone already knows who was under investigation.”

Benjamin Crump, Aguiar’s co-counsel and prominent civil rights lawyer, said on Thursday that “with each day that passes and with every action of Daniel Cameron, it becomes more and more evident that the attorney general has something to hide”.

He called Cameron’s motion Wednesday a “slap in the face to Breonna’s family, and yet another attempt to conceal the corruption of his office”.

Meanwhile, protesters who have been in Louisville’s streets for more than 130 consecutive days have vowed to continue demonstrating until justice is served.

Many say all the officers involved in Taylor’s death must be fired, some demand the case be reopened, and others hope an ongoing FBI investigation into the case will yield new charges.

Travis Nagdy, who has participated in the demonstrations since day one, said there is no reason to stop protesting yet. “We have so much momentum that if we stop now, we won’t get any of the change that we’re seeking,” Travis told Al Jazeera late last month.

“We’ve already made a lot of change,” he added, pointing to the citywide ban on no-knock warrants and other police reforms the department is required to implement.