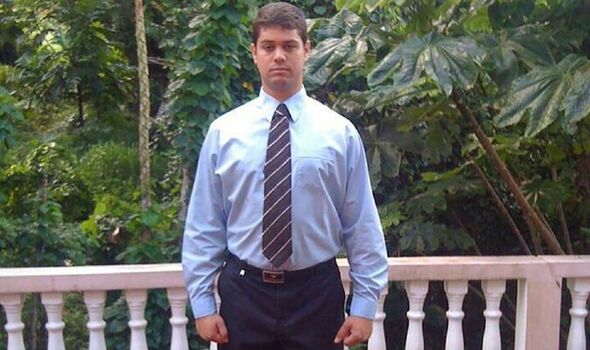 Alexander Clack, 40, killed his wife Nixiann Downes-Clark after she discovered his infidelity and threatened to leave after she found out he had been having sex with their 17-year-old childminder. The couple had moved from Kent to Grenada in 2009 and seemingly had a dream lifestyle marrying in June that year and running a successful recruitment firm together.

Ms Downes-Clack gave birth to their daughter Anna (not her real name) in December 2011 and it is reported she said Clack was a doting father.

In 2014 former prisoner officer Clack murdered his wife on their fourth wedding anniversary and buried her body in a small suitcase which was found in a shallow grave on the outskirts of St George’s, the Caribbean island’s capital, five days later.

In a Death-in-Paradise-like turn of events, Clack had embarked on an affair with a 17-year-old babysitter the couple had hired so Ms Downes-Clack could return to work.

It’s understood she discovered the affair after finding the pair having sex in their bed, Clack’s murder trial heard.

Mrs Downes-Clack’s body was found five days after she had disappeared and Clack was arrested and charged with non-capital murder.

He had flown into an angry rage after collecting his wife from work when she had threatened to leave him.

Back at the house, he’d beaten her black and blue, before strangling her in front of their two-year-old daughter.

Then he’d shoved her lifeless body into a suitcase – driving it to a hilltop overlooking Grenada‘s picturesque capital St George’s.

There, he’d buried the case in a three-foot-deep-ditch.

Clack was sentenced to 67 years and six months in prison in February 2016, but he has now walked free after his lawyer argued that the loss of a court computer with a transcript of his murder trial had made it impossible to appeal the sentence.

Nixiann’s aunt Kim Szmyglewska, 45, told The Sun: “I’m horrified. How could they release someone on such a flimsy technicality when he is guilty of such evil and clearly a danger to women?

Mrs Downes-Clack started regularly staying over at Clack’s flat in Croydon, South London, and soon she moved in with him.

Clack’s lawyer Anselm Clouden said: “Mr Clack was overjoyed but is a typically reserved Englishman. He may have celebrated with a glass of port.

“I understand the British High Commission assisted in arrangements to fly him home.”