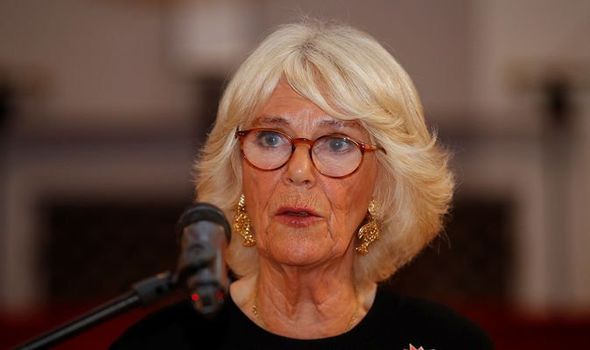 In a powerful speech, Camilla also stressed that women must be encouraged to speak up about crimes committed against them without feeling shame.

She said Britain has been “appalled” by a series of brutal killings of women like Sarah, who was abducted, raped and strangled by policeman Wayne Couzens.

She added: “Each one of these women endured unimaginable torment – and their loved ones who are left behind continue to suffer in the wake of their deaths.”

As well as Sarah, 33, Camilla listed more victims of horrifying murders this year.

They included Sabina Nessa, 28, who was found beaten to death in a south-east London park, and Bennylyn Burke, 25, who was stabbed and beaten in Dundee. Her two-year-old daughter, Jellica, was suffocated.

Camilla said that their names “with all the others, must never be forgotten”.

She was speaking at a launch reception for the Shameless! Festival – an event aimed at changing attitudes towards sexual violence.

Other guests at the reception included Carrie Johnson. The Prime Minister’s wife is understood to have been personally invited by Camilla and was seen practising her curtsy ahead of the royal’s arrival.

The Duchess urged the audience to join her “in paying tribute to all these precious lives that have been brutally ended” and doing “everything we can to bring about the end of violence against women”.

She cited a national survey that found 86 percent of young women have been sexually harassed in a public place – but 96 per cent of those did not report it.

She said: “It is, as almost all women know, a deeply disturbing experience to be sexually harassed. Yet somehow a culture of silence has grown up, in which women conceal their experiences of such offences.”

The Duchess went on: “Shame is one of the most powerful emotions felt after a sexual violation.

“The victim feels invaded and dirty; weakened by having been put in a position of helplessness… Often, this sense of shame causes the victim to blame herself and mistakenly take responsibility.”

On average, one women is killed by a man every three days. The Duchess acknowledged the challenges of ending the violence are “immense”.

But she said there is hope they can be overcome, by encouraging victims to be “shameless” and speak up about their ordeals – and by getting men to join the fight.

She said: “We do not, in any way, hold all men responsible for sexual violence.

“But we do need them all on board to tackle it.

“After all, rapists are not born, they are constructed.

“And it takes an entire community – male and female – to dismantle the lies, words and actions that foster a culture in which sexual assault is seen as normal and… shames the victim.”

The Duchess also quoted parts of the impact statement by Sarah’s mother, heard in court before Couzens, 48, was jailed for life.

Susan Everard said: “In her last hours [Sarah] was faced with brutality and terror, alone with someone intent on doing her harm.

“The thought of it is unbearable. I am haunted by the horror of it.”

The Shameless! Festival is at Battersea Arts Centre, south west London, on November 27.

The Daily Express has launched a crusade called End This Injustice, which is calling for greater protection for abuse victims.