The history of vanguard artists teaching — as a job, as art, or as some combination of the two — is rich and varied. Joseph Beuys conceived of lectures as performances, explaining artworks to a dead hare in a famous 1965 piece. Faith Ringgold has worked with students from pre-K through college and composed remarkable children’s books. Ian Wilson, who died in April, spent years leading discussions of his ideas in a Socratic style.

Now Jeff Koons has entered the classroom at age 65, signing on as an instructor for MasterClass, the video platform through which celebrities like RuPaul, Natalie Portman, and Usher have shared their expertise. The school’s tuition for unlimited access is $180, billed yearly.

I signed up immediately (I’m a fan), curious to see how Mr. Koons might adapt his grand vision for artists with more modest ambitions. I had struggled through one drawing class in college to become an art history major, but never developed any original ideas, much less the skills to realize them, and put aside artmaking as soon as I could.

But from the first moments of his two-hour program on “art and creativity,” it is apparent that this will not be Bob Ross’s “The Joy of Painting.” “What is art?” Mr. Koons asks. “Is it painting? Is it sculpture?” Sure, you might respond, but he is still talking. “Art is a vehicle that lets us have an impact on the external world, and also lets the external world have an impact on us.”

Mr. Koons, of course, has made an impact. His steel “Rabbit” (1986) sculpture sold at auction last year for $91.1 million, the highest price ever paid on the block for the work of a living artist. Over a four-decade career, his unforgettable, scrupulously crafted renditions and appropriations of mass-culture subjects (balloon animals, vacuum cleaners, the Hulk) have graced prestigious museums halls, the Palace of Versailles, and the estates of our wealthiest. He is one of the few artists who is a household name. He is also intensely divisive, for his unabashed celebration of decadence and his outsourced production methods. Love him or hate him, he has entered the pantheon.

Those tuning in to glean some of the master’s magic may be disappointed, however.

While the chef Thomas Keller demonstrates how to cook scrambled eggs on MasterClass and the tennis star Serena Williams walks viewers through groundstrokes, Mr. Koons is here as a life coach and a salesman. He wants us to succeed, and he wants us to be happy. “Please have a voice with your work, because everybody is depending on you,” he says. “You need to be courageous. And in being courageous, you’re just being courageous with yourself.”

Successfully making art requires accepting yourself, in Mr. Koons’s philosophy, so that you can pursue your interests without shame. “Everything about your past is perfect,” he says. “Everything up to this moment about you is spectacular.” (RuPaul actually offers pretty much the same advice — “Know that you are perfect as you are!” — in an energetic segment on “owning the room” in his own class.)

For veteran Koons watchers, these affirmational bromides will be very familiar, but his unrelenting earnestness is both impressive and unsettling. Clad in dark blue — blazer, shirt and pants — he sits in cavernous, deserted studio spaces in much of the footage, speaking with controlled cheer. His delivery is as smooth as soft butter spread across warm bread. I found myself mindlessly nodding along, as he compares an ashtray that he remembers loving as a child, with a reclining woman holding her legs aloft, to Michelangelo’s “Pietà.” “How can that be any less than this masterpiece by Michelangelo?” he says. “It’s equal.” Wait, what?

The 13 short episodes are ostensibly devoted to different aspects of making and understanding art. In “Approaching the Blank Canvas,” Mr. Koons explains, “I like to start with an idea.” He asks himself, “What have I been pulled to? What have the interests been lately?” He believes this will work for you, too. In “The Power of Color,” we learn that “color is one of the main tools an artist can use to communicate.” He’s “always been pulled to turquoise.” I’m a sucker for purples and pinks myself.

Really, this is a sumptuously produced infomercial for Mr. Koons’s art, and the best moments — the funniest, the weirdest — are when he feels free to cast off his teaching responsibilities and just talk giddily about his art, not yours, and his zest for Titian and Rubens, Bernini and Queirolo. (Women do not figure in this curriculum.)

Holding a pink inflatable bunny, our teacher recalls realizing in the late-1970s that he could present it as ready-made sculpture. “This is like lungs,” he says. “It’s like us. It’s like you. Take a deep breath.” He inhales.

Reliving the rush of that eureka moment, Mr. Koons says that the pink in the toy “was transforming me; I was becoming vaster,” and “I foresaw that, yes, I can expand even further.” 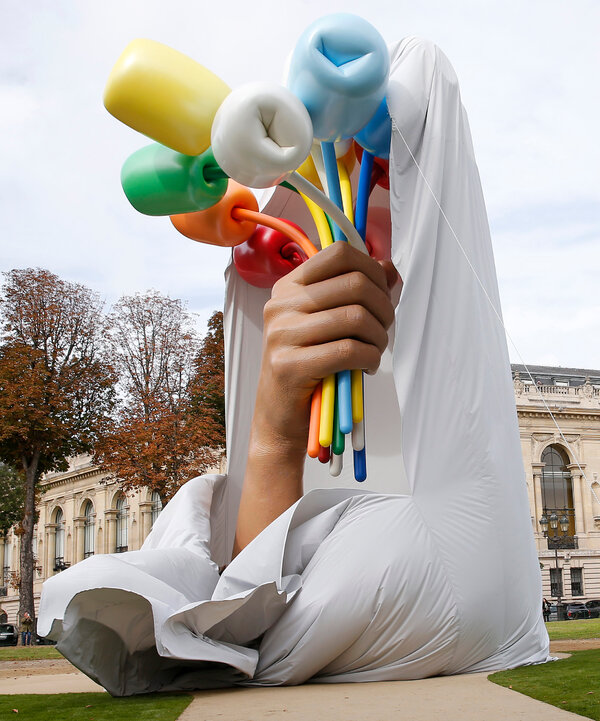 A trace of menace emanates from that line, and such discordant moments (though there are too few) help pierce the project’s hermetic atmosphere. Darkness lurks behind Mr. Koons’s smile and beneath his surfaces. It’s part of what makes his art so alluring and infuriating.

This Mr. Koons is speaking to fellow executives — the managers of people and capital who are his potential collectors. While his army of assistants (downsized last year) deals with “the same details over and over again” in his art, he says, “I’m able to leave the room and come back with a fresh eye and be able to see something a little more clearly.” Chief executives and management consultants, and those who read their memoirs and self-help books, would no doubt approve.

Mr. Koons emphasizes that he strove to remain “self-reliant,” working day jobs (selling Museum of Modern Art memberships and commodities), and that it’s important to be able to deal with criticism. This is solid advice for aspiring artists — some of the only instances of it in the show. The only real assignment he gives is to “maybe create a notebook” of images to inspire you.

I will admit that I have not yet done this, but I am embracing his guidance about self-acceptance.

Like any good advertisement, the most sizzling sequences venerate his latest products. We get a behind-the-scenes look at the creation of “Pink Ballerina,” an intricate stone rendering of a dancer lifting her lace tutu. Mr. Koons says he has been working on it for eight years, and selected pink rock to convey “information of femininity and hopefully of fertility and a sense of future.” I’m continually awed by his ability to free-associate, but worry students would be laughed at by art-school peers if they offered his brand of analysis.

Much of what our host says about art does not make logical sense, but on certain points he is conspicuously direct. He wants us to know that, when it comes to dedicated artists, “oftentimes, the late work is really the best.” And he is assiduous about details; when one fabrication job fell short of his expectations, he remembers worrying that people are “going to feel that I didn’t care about them.”

But as the episodes clicked by, and my energy flagged in the face of Mr. Koons’s repetitious monologues, I began to feel that this master of the market was missing the boat. For a man who has sold $700 plates and $8 million sculptures, a video seems a little unimaginative. Why aren’t there bonus classes, with special lessons and group discussions, available at a hefty upcharge? Why no elite, one-on-one tutoring?

This is, alas, a one-way mentorship. Mr. Koons is taking no questions. For now, we student-artists at least have his hearty encouragement — echoing out from our screens. “Please do it for other people,” he says, “and people will be so grateful to you.”

Andrew Russeth is an art critic based in Seoul.