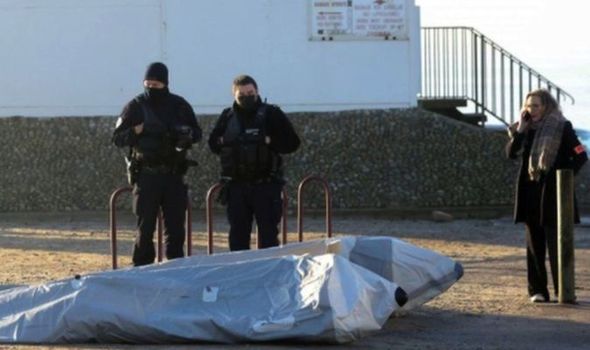 The man fell overboard when a migrant boat got into difficulty close to the French coast at Berck-sur-Mer, which is south of Boulogne. Most of the people rescued were on board the dinghy, although five people had to be picked up from a sandbank.

The drowning on Friday is believed to be the first fatality in the English Channel this year.

Prosecutors said the man who died was believed to be in his 20s and of Sudanese origin.

Local media said the alarm was raised when someone on land spotted the boat getting into difficulty.

The individual was found overboard and unconscious in the early hours of Friday. He was taken back to shore but was declared dead.

The latest attempts at the perilous journey come despite sub-zero temperatures on the French coast.

Multiple Border Force vessels have been active in the Channel with at least one boat reported to have reached the UK.

It comes after at least 271 people, including a young child, aboard 10 small vessels reached the UK on Thursday.

The Press Association reports that so far this year more than 450 people have made the life-threatening trip across the Channel in small boats following a record-breaking year in 2021.

At least 27 peopled drowned in the Channel in the what was reportedly the worst single incident involving migrant boats since the busy strait became a popular route to the UK.

Figures compiled by the BBC show that at least 28,431 migrants made the journey in 2021.

Last week it was announced that Border Force officials could take industrial action over Priti Patel’s plan to turn back dinghies in the Channel.

The Public and Commercial Services Union, the members of which include around 80 percent of Border Force officials who would be tasked with implementing the “pushbacks”, and the charity Care4Calais have filed an application for judicial review on the pushback policy.

Despite the Home Secretary’s pledge to make crossings an infrequent phenomenon by spring 2020, more than 36,000 people have succeeded in reaching the UK in the last two years.

Steve Valdez-Symonds, Amnesty International UK’s refugee and migrant rights director, commenting on Thursday’s arrivals, told Reuters: “People making these perilous sea crossings are doing so out of desperation, mainly because there are no safe and legal routes for them to seek asylum in this country, and many have family and other connections here.

“Ministers should stop shirking their responsibility toward refugees.

“For instance, it’s misleading, and indeed verging on cruel, for ministers and officials to talk about France being a ‘safe country’ when many people who are perfectly entitled to seek asylum in Britain are trapped in miserable and dangerous conditions in camps in northern France.

“The UK and the French governments should prioritise humane ways of fulfilling their shared duty to provide asylum.”

Border Force and the RNLI were busy in the chilly Dover Strait from 1am on Thursday as calm conditions sparked a flurry of attempts to reach the UK.

Earlier this month Ms Patel called in scientific advisers in a bid to use X-rays and medical checks on asylum seekers to stop grown men “masquerading as children” on applications.

The Home Office reported that the number of adult asylum seekers falsely claiming to be children is a “significant issue” as it announced the set up of a scientific advisory committee to get advice on ways of checking the ages of those arriving in the UK.

Last year the Government confirmed it was considering the use of “scientific methods” as part of age assessments on those suspected of lying about how old they are under plans proposed in the Nationality and Borders Bill.

However, some campaigners and medical professionals have raised questions as to whether the proposed measures are ethical or reliable.

Ms Patel said: “The practice of single grown adult men, masquerading as children, claiming asylum, is an appalling abuse of our system which we will end.

“By posing as children, these adult men go on to access children’s services and schools through deception and deceit – putting children and young adults in school and care at risk.

“It is a fact that two thirds of age dispute cases have found that the individual claiming to be a child is actually over the age of 18.”